Over the last few years that I have been low carb, grain and gluten free, I have tinkered with the classic and traditional green bean casserole (you know, the kind made with canned soup and commercial French-fried onions). I have made it with sauteed onions, without onions and finally came up with a version that I like this past year. I use my low carb Cream of Mushroom Soup recipe which can be made several days ahead of time to save time when putting the casserole together on Thanksgiving morning. If you want, you can top it with my Oven-Fried Onion Rings but that is a lot of work (in my opinion) for a day like Thanksgiving where you are probably preparing a lot more side dishes than you usually do for a typical night's dinner.

My favorite way to prepare the onions is to thinly slice fresh onion rings, toss in oil, and season with salt and then roast until they are golden and crisp. It is imperative that you watch them closely though because they can go from brown to burned quickly...don't leave the kitchen. Because I know you are liable to make the same mistake I did last year, and step away for "just a moment" (thus burning your first batch), do yourself a favor and pick up an extra onion for back-up...LOL. After preparing the crispy onions, I prepare the casserole much the same way as in the "other version" I used to make. I also like to add a few ounces of cream cheese to the doubled Cream of Mushroom Soup to make it richer when making it for casseroles like this one, so be sure to check out the notes at the bottom of the recipe first (it gets whisked into the soup when made). I've always added about 1 cup of shredded sharp cheddar cheese (up to 1-1/2 cups) and about 1/4 cup of Parmesan cheese but you can leave that out if preferred. It just gives it a bit of flavor without making it cheesy. Below are some photos of the Green Bean Casserole I made last year (before topping it with the remaining final half of onions and baking). I included the recipe below. Enjoy! 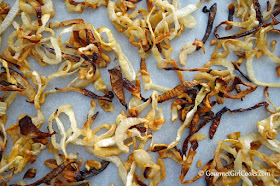 In a large bowl, toss thinly sliced onion rings with oil to lightly coat. Spread out on lined baking sheet in a single layer (you may have to use 2 baking sheets or roast in 2 batches to prevent overcrowding). Season generously with salt. Roast at 375 degrees for 20 minutes or until they just begin to brown (keep a very close eye on them so they don't burn and toss them occasionally to brown evenly). As soon as onions just begin to brown, reduce oven temperature to 275 degrees F and cook until golden brown, about 10 more minutes. Turn oven off and allow onions to continue crisping and drying out.

When onions are done, preheat oven to 350 degrees F. In a large mixing bowl, combine cooked green beans with 2 cups Cream of Mushroom Soup (the doubled soup recipe makes approximately 3 cups; start by adding 2 cups and add more, if necessary), Parmesan cheese, cheddar cheese, and about half of the crispy onions. Season with salt and pepper, to taste. Pour mixture into prepared casserole dish.

Bake for 30 to 40 minutes, or until heated through and bubbly. Top with remaining half of crispy onions and cook an additional 5 to 10 minutes or until onions are heated and golden.

*Notes: If a thicker soup mixture is desired, when preparing the doubled recipe for cream of mushroom soup, add 3 to 4 ounces of brick style cream cheese to the pan after the moisture is cooked out of mushrooms and whisk until cream cheese is softened and melted before adding chicken stock and cream (instructions are on the note at bottom of soup recipe) and whisk briskly while heating until blended. When making the crispy onion topping, watch very closely because they go from browning to burning very quickly.

Please feel free to leave me a comment. Thank you for being kind...it is appreciated!