We awoke to a sunny and very humid morning. The sun was a complete surprise and probably won't last long because there's actually no sun whatsoever in our forecast until next Saturday! The humidity with all the rain we've had over the past 2 weeks makes being outside quite miserable. I decided to start our Sunday morning with a good breakfast. Since I had a bunch of fresh spinach in the fridge and 2 large containers of President's Feta Cheese (it's on sale at Costco right now by the way), as well as some fresh dill, I went with spinach and feta omelets for breakfast. I made two omelets, one for me and one for hubby. I lightly wilted and sautéed about 8 ounces of fresh spinach in 1 tablespoon of olive oil, then moved it out of the skillet to a large cutting board. I added a bit more olive oil and sautéed 2 sliced green onions and about 1/4 cup of diced Vidalia onion until translucent and slightly caramelized. I moved that out of the skillet and wiped it clean.  I placed the sautéed spinach on a large cutting board and blotted the excess liquid out by pressing it with several paper towels, then I coarsely chopped the spinach. I chopped a few springs of fresh dill and set it aside.

I picked up a dozen Vital Farms pasture raised eggs this week and decided to give them a try this morning. They were beautiful large brown eggs with the deepest golden yolks that I've seen. I would definitely buy these eggs again. We each had a 2-egg omelet that I prepared one at a time. I added a pat of butter to the hot nonstick skillet and poured 2 beaten eggs (beaten with 1 teaspoon of water) into the sizzling butter and rolled the pan around to evenly spread the eggs in the bottom of the pan. I cooked it over medium heat until done, then scattered half of the cooked spinach and 2 to 3 tablespoons of crumbled feta cheese, half of the chopped dill, a few grinds of black pepper, and folded it over in the skillet before sliding it onto our plates. I added the cooked onions to my omelet only since hubby isn't a huge fan. I served his omelet with turkey bacon and mine with 2 Applegate chicken sausages. It was delicious and should hold us until dinner. I snapped a few photos below. Enjoy! 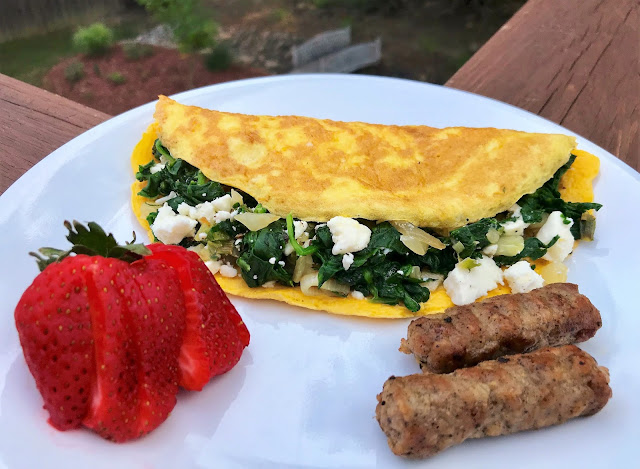 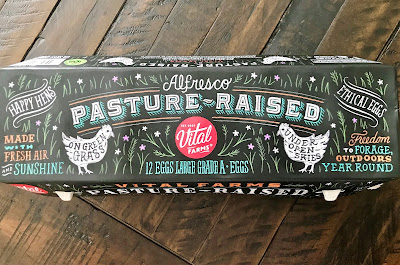 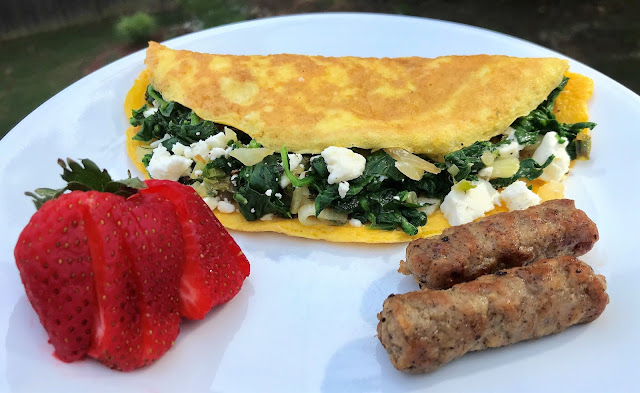 Posted by Gourmet Girl Cooks at 11:31 AM