This evening I was in the mood for tacos. Originally, I had planned to use the pound of ground sirloin in my fridge to make them, but unfortunately when I opened the package, it smelled off...so I tossed it and used the pound of ground chicken breast instead.  I cooked the ground chicken in my wok (instead of skillet) in extra virgin coconut oil until it was cooked and then added the taco seasoning and water and simmered it until the liquid was almost gone.  I then added a few tablespoons of fresh salsa to the taco meat and continued simmering, uncovered, until there was no liquid left in the pan...just concentrated flavorful taco meat.  I used Boston lettuce leaves as my taco shells and filled them with taco meat, shredded cheddar cheese, diced tomatoes, diced avocado and topped them with a little more salsa and a dollop of sour cream. They were absolutely delicious and I couldn't have enjoyed them any more if they had been in traditional taco shells instead.  I snapped a few photos below for you to see as well as the recipe for my taco seasoning to make the tacos linked here -----> Tacos. Enjoy! 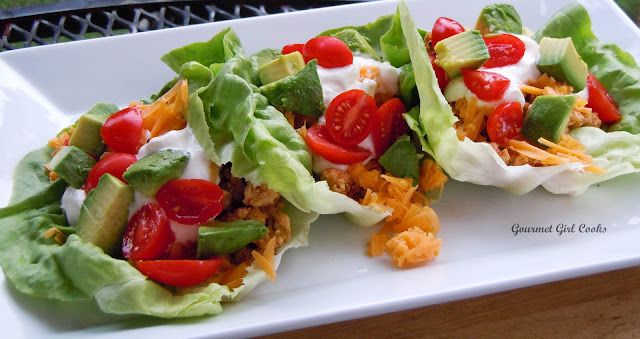 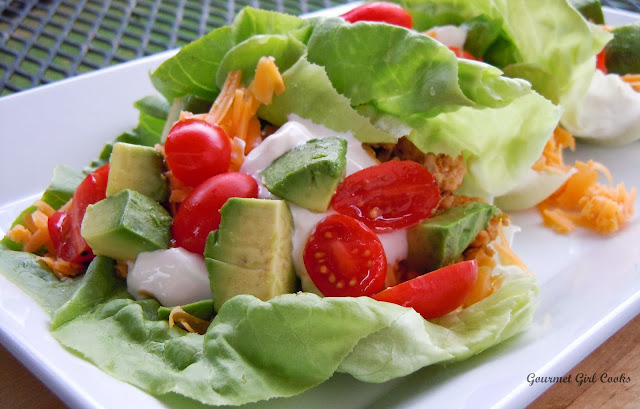 Beautiful! I love your method of cooking the chicken to get it to absorb maximum flavor!

Hi Kath! Thank you. It really does help -- rather than have all that flavor left in juice that will roll out of your taco, I prefer to cook it down and concentrate it so it stays with your chicken and keeps it moist. :-)

Looks great. Is there a way to sort your recipes by breakfast, lunch, dinner, dessert, etc.

Hi Carol...thank you. At this moment, the only way I know is to do it by typing in the "search bar" on the right side of my blog. Now that I have so many recipes and posts, I am working on a way to better organize them to make them easier to find...I hope to do that -- I just need a few more hours in my day! LOL I just wish I had started 6 months ago! Stay tuned for an easier way to find different categories in the future! If there is ever something in particular that you can't find...please ask me and I will gladly locate it for you. :-)