With the sudden drastic drop in temperature this weekend and the dark, rainy, gloomy weather as well...I found myself thinking about one of my longtime (decades) favorite "comfort soups" that I always enjoyed making this time of year. The only problem is that it is full of carbs since it's a super cheesy creamed potato soup, and full of other unhealthy things as well, like processed cheese (Velveeta) and regular wheat flour that is used to thicken it. It is called "Golden Cream of Potato Soup." I found the recipe many years ago in one of my old Southern Living Annual Cookbooks. It quickly became a regular staple in our house when my kids were growing up and I continued making it and surprising them with it even after they grew up -- you know, one of those "my Mommy loves me meals". We really love(d) that soup! Since I no longer eat wheat and like to eat low carb as well, I have been contemplating "de-carb-onating" it for a while...and finally decided to bite the bullet and give it a try this weekend with the cold ugly weather we are experiencing. It turned out AWESOME, and better than I expected...so much so, that hubby actually thought that there were potatoes in it!!! Now how is that for successful?

My secret ingredient was the good old "faux-tato"...called cauliflower! I actually picked up a 2-pound bag of raw cauliflower florets this weekend at Costco which yielded about 3 cups of pureed cauliflower after it was cooked. It worked superbly as a replacement for the potatoes and I used cream cheese in place of the flour to help thicken it...and cream in place of the skim milk...REAL cheddar cheese (instead of Velveeta) that I freshly grated so it wouldn't have any starches on it (like pre-shredded cheese has) to hinder it from melting smoothly into my soup...and I used chicken stock instead of bouillon cubes called for in the original recipe. Otherwise, it was essentially the same as the original version...just better! When I cook my cauliflower, I prepare it the same way I do when I make my cauliflower mash -- I cook all the liquid out of it until the pan is essentially dry on the bottom -- not scorched at all, but just until there is no wetness left on the bottom of the pan. Getting all the moisture out of the cauliflower is the key to making it "potato-like" in texture since cooked potatoes tend to be a bit drier inside because of the starch and since potatoes are what we are trying to substitute...it helps if the cauliflower is not waterlogged after cooking it. I garnished our soup the same way I used to garnish the original version...with extra shredded cheddar cheese and crumbled bacon. While my soup was cooking, I oven roasted some Maverick Ranch Applewood Smoked Bacon and crumbled it on top of the soup when I served it. This soup is rich, creamy, cheesy and decadent...just like the original version. If I hadn't made the soup with my own two hands...I could have easily tricked myself! LOL Below are a few photos as well as the recipe. If you are curious in seeing the original version of this soup...here is the post, recipe and photos when I made it almost 2 years ago, before I went wheat/grain free and low carb...so you can compare the 2 versions for yourself. ---> "Golden Cream of Potato Soup". Enjoy! 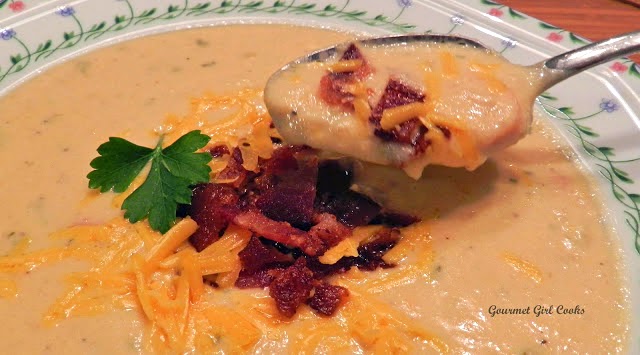 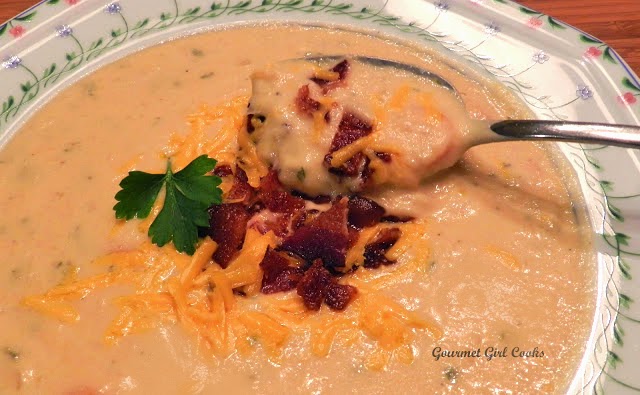 Place cauliflower and 1 cup of water in a large pot or Dutch oven; cover and bring to a boil and cook about 10-15 minutes or until tender. Remove lid and continue cooking until no water remains in bottom of pot (watching closely and careful not to burn or scorch) and cauliflower is not waterlogged. Puree cauliflower with an immersion blender or regular blender until smooth (yields approximately 3 cups of pureed cauliflower); transfer puree to a bowl and set aside

In same pot, add celery, carrots, onion, parsley, chicken stock, salt and pepper; bring to a boil over medium-high heat; cover and reduce heat to low and simmer until vegetables are tender, approximately 10 to 15 minutes. Return and add pureed cauliflower back to pot and stir into soup mixture; heat thoroughly until hot; add cream cheese and stir until melted throughout. Stir in cream and heat over medium heat; careful not to boil. Stir in the shredded cheddar cheese, half at a time, stirring frequently until melted and well blended. Taste for seasoning and adjust salt and pepper, as necessary. Do not boil soup; heat just until it begins to simmer (stirring constantly to keep from burning or sticking to bottom of pan).  Remove from heat. Ladle into bowls and garnish with shredded cheese and crumbled bacon, if desired.

Posted by Gourmet Girl Cooks at 10:02 AM

Your blog is quickly becoming one of my favorites! I am adding this recipe to my to-do list! :)

I am french, and I keep having to correct your English :-)

Words like desired or optional are never needed when describing butter and especially bacon :-)

Or maybe it is some kind of guilt over eating such tasty food and loosing weight :-)

Oh and by the way, this soup is just amazing and definitely desired!!!

Thanks, Luc -- or should I say "Merci"...LOL. You are probably right about the bacon and butter! Thanks so much! :-)

Love this soup, GGC! Perfect for a day like today. I see a few snow flurries starting ... not many, mind you, but you know how they add up!

Hi CyberSis -- Oh, wow -- snow flakes already -- I hear they already have about 6 inches and counting on the ground in the western Maryland area. I would like to see a few flakes here, too, this winter! :-)

Looks wonderful. You are correct that cooking out the water is the trick to making cauliflower act/taste like potatoes. It takes a bit more time, but worth it.

Thanks! It really does make a difference (cooking out all the excess water in the cauliflower). I do that when I make my cauliflower mash too -- and it is hard to tell the difference between that and real mashed potatoes! :-)

I made this on the weekend and it was super delicious. Will definitely make it again. Thanks for yet another great recipe.