This morning we slept in and awoke to a very dark, rainy cold morning here. We have lots to do this weekend with decorating and Christmas shopping. I am a bit behind schedule this year -- I'm usually better organized. We did our Costco run last night after work so we just had "sandwiches" for dinner last night. I used one of my grain free tortillas and layered it with Boar's Head Cracked Black Pepper Turkey and their sliced muenster cheese and just rolled it up. When I woke up this morning I was in the mood for a good breakfast, so I sliced up a little over a pound of brussels sprouts into 1/4" slices and steamed them for about 4-5 minutes in a couple tablespoons of water covered in the microwave just to soften and wilt them a bit, but not cook them. I diced some applewood smoked bacon into large dice and cooked the diced bacon in a non-stick skillet on the stove, removing the rendered fat as it cooked out so it would become nice and crisp (I just tilted the pan and spooned it off into a bowl). In another skillet I sauteed a diced small onion n a bit of oil until translucent. I transferred my crisp bacon bits over to a paper towel lined plate to drain and left a tablespoon or 2 of the drippings in my skillet and added the sprouts and cooked them on medium-high heat, turning them frequently until browned and caramelized. I added my crispy bacon and onions to the sprouts, seasoned with sea salt and black pepper and tossed them around and set aside. I fried an egg in the empty skillet my onions cooked in and then arranged my Brussels Bacon Hash in a "wreath-like" pattern around the edge of my plate, leaving a spot in the middle to place my fried egg. I served it with an Easy Cheddar Black Pepper Biscuit that I pulled out of the freezer and then lightly toasted. It was a delicious pre-holiday breakfast with the slightly sweet flavor of the caramelized sprouts and onions combined with the salty crispness of the bacon, and of course a rich cheddary biscuit. I snapped a quick photo below and the recipe for the biscuits. Enjoy! 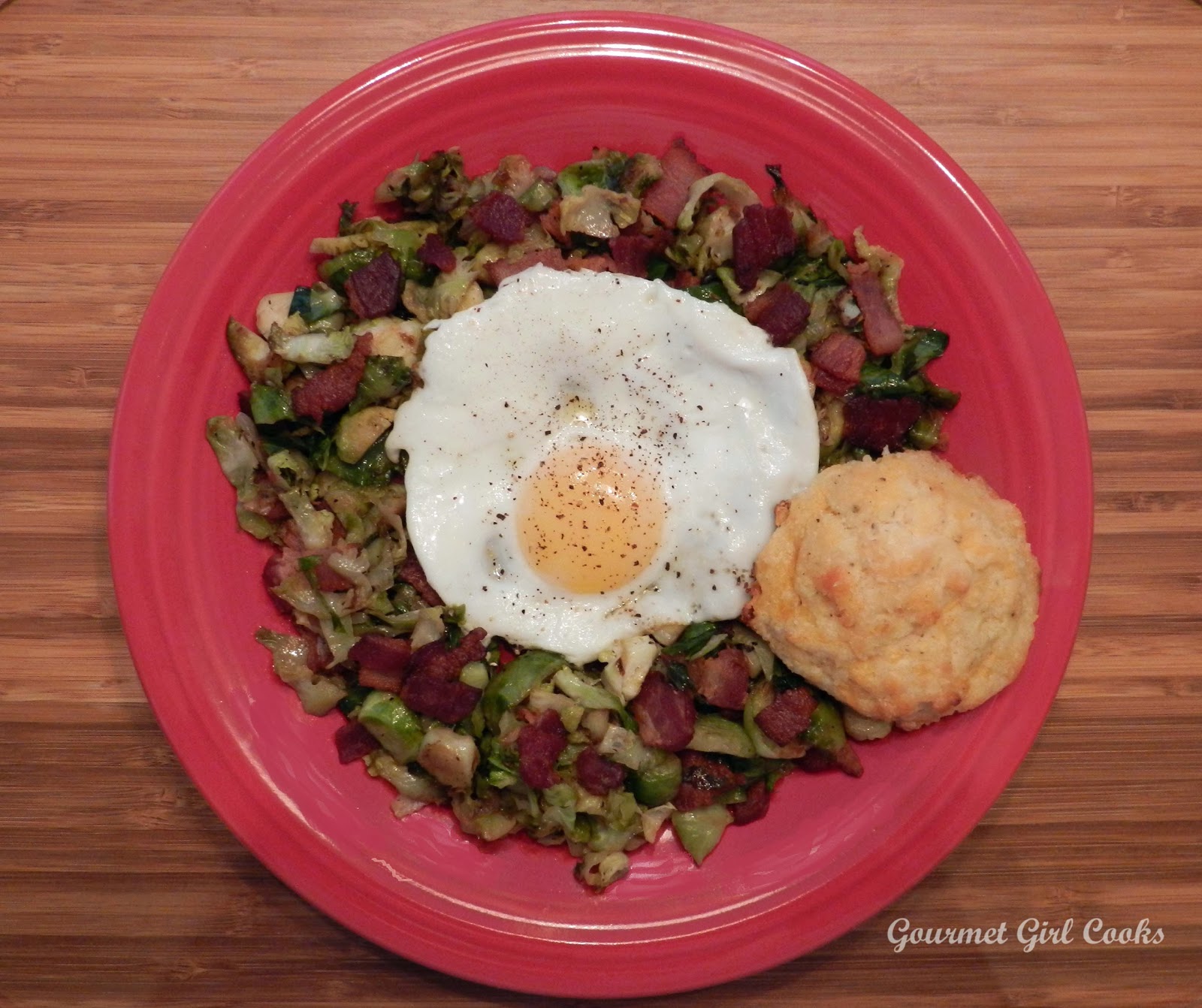 Posted by Gourmet Girl Cooks at 11:59 AM

Another beautiful "Christmas wreath"! Brussels sprouts caramelized in bacon fat sounds super yummy. Bacon is another thing I avoided for years, until discovering nitrite-free bacon at Costco. We usually microwave it in paper towels (to avoid the messy cooking and clean-up) but you don't get any of the lovely bacon fat to save in the fridge that way.

Another thing my mom used was lard ... years ago, when the only kind was the "real" stuff. Of course, there eventually came a time when we all thought Crisco was healthier (even my grandma started using it!) I wouldn't mind using lard once in a while, but the naturally rendered kind seems to have disappeared from store shelves and replaced by the hydrogenated kind. Would that be "lard-flavored" Crisco ... sort of like "butter-flavored" Crisco?

Thanks, CyberSis! LOL on the "lard-flavored" Crisco! But, you are right -- they even went and ruined lard, didn't they! :-)