This evening we had Moussaka for dinner. It's one of my absolute favorite dishes. I grew up eating this since early childhood. It was one of my father's favorites and my mother made the best. If you don't know what Moussaka is, it's basically a casserole layered with fried or sauteed eggplant, ground meat, tomato sauce, onion, garlic and spices such as cinnamon, black pepper and allspice. The eggplant and meat layer is topped with béchamel sauce and then baked. There are numerous variations (Greek, Turkish, Bulgarian, Serbian, etc.), but this is probably one of the more classic variations. I've also eaten a version topped with thinly sliced potatoes...but this version is my favorite.

Rather than fry or saute the eggplant, I usually grill, broil or bake my eggplant. It's much less messy to prepare it that way than cooking it on the stovetop (and I'm all for less messy). Also, when frying or sauteing eggplant, it sucks up olive oil like a sponge and you need to constantly keep adding oil to your frying pan. I grilled the eggplant for this evening's version. I sliced it in 1/4-inch thick slices and brushed it with olive oil, seasoned with a little salt and pepper and then grilled it for a few minutes on each side until tender. The most important tip is to make sure you don't add lots of tomato sauce. This isn't Italian food...you don't want "tomato sauce with meat"...you want "meat with a little tomato sauce"...just enough to moisten and flavor. The flavors in this dish are unique if you aren't familiar with middle eastern food. I like adding a dash of allspice to my meat mixture, but hubby finds the taste of cloves (in the allspice) a bit too much...so I just add cinnamon, salt and black pepper. The béchamel sauce has a touch of nutmeg.

Traditional béchamel sauce is made with butter, flour and milk. The flour and butter is combined to make a roux and the milk is added and cooked until thickened before adding cheese, etc. In my grain-free moussaka, I created my own grain-free version of béchamel using ricotta cheese, eggs, Parmesan cheese and a bit of heavy cream. It's amazing how much the taste and texture is spot on. I've also made the sauce without adding cream for a thicker béchamel, particularly when I make my "Mini Stuffed Moussaka Boats" because I need the béchamel to be super thick so it stays on top and doesn't run off. Cinnamon and nutmeg are not spices commonly associated with flavors used in savory dishes...but its actually quite popular in many Mediterranean type dishes. I like to serve Moussaka with a fresh green salad. I used to eat it alongside rice (pilaf), but these days, I just stick with the green salad and really don't miss the rice (or the carbs). I snapped a few photos below as well as the recipe. Enjoy! 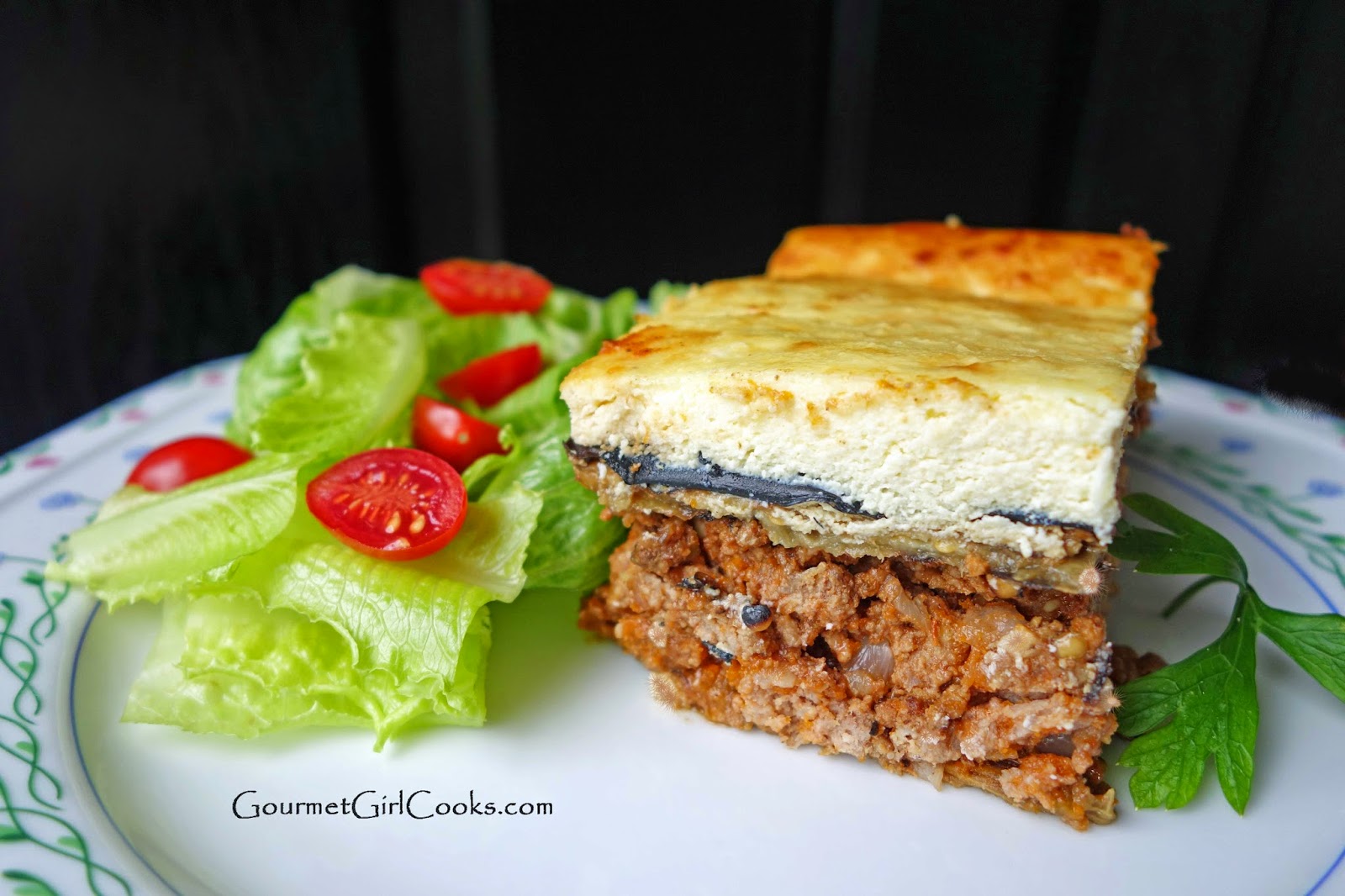 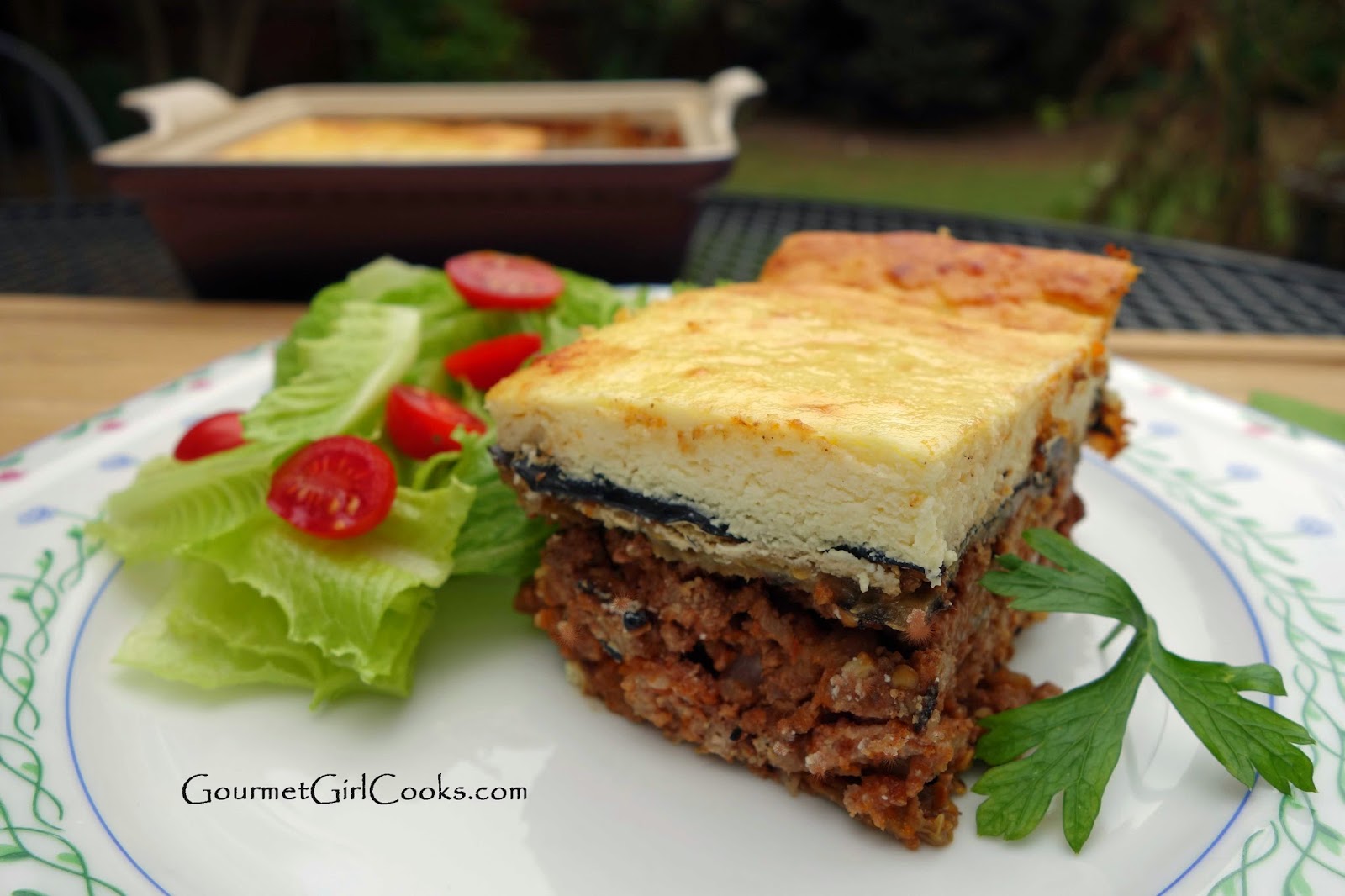 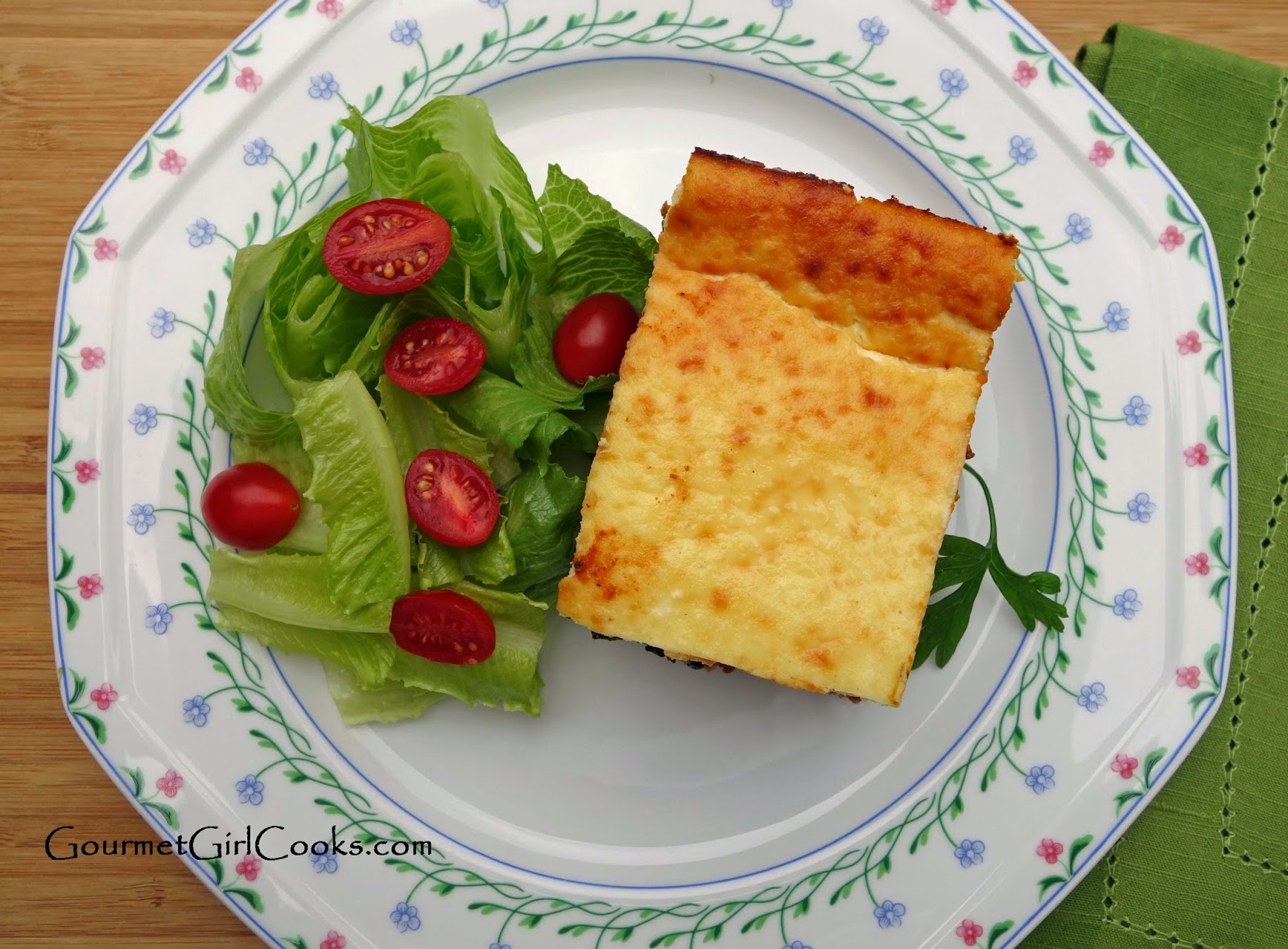 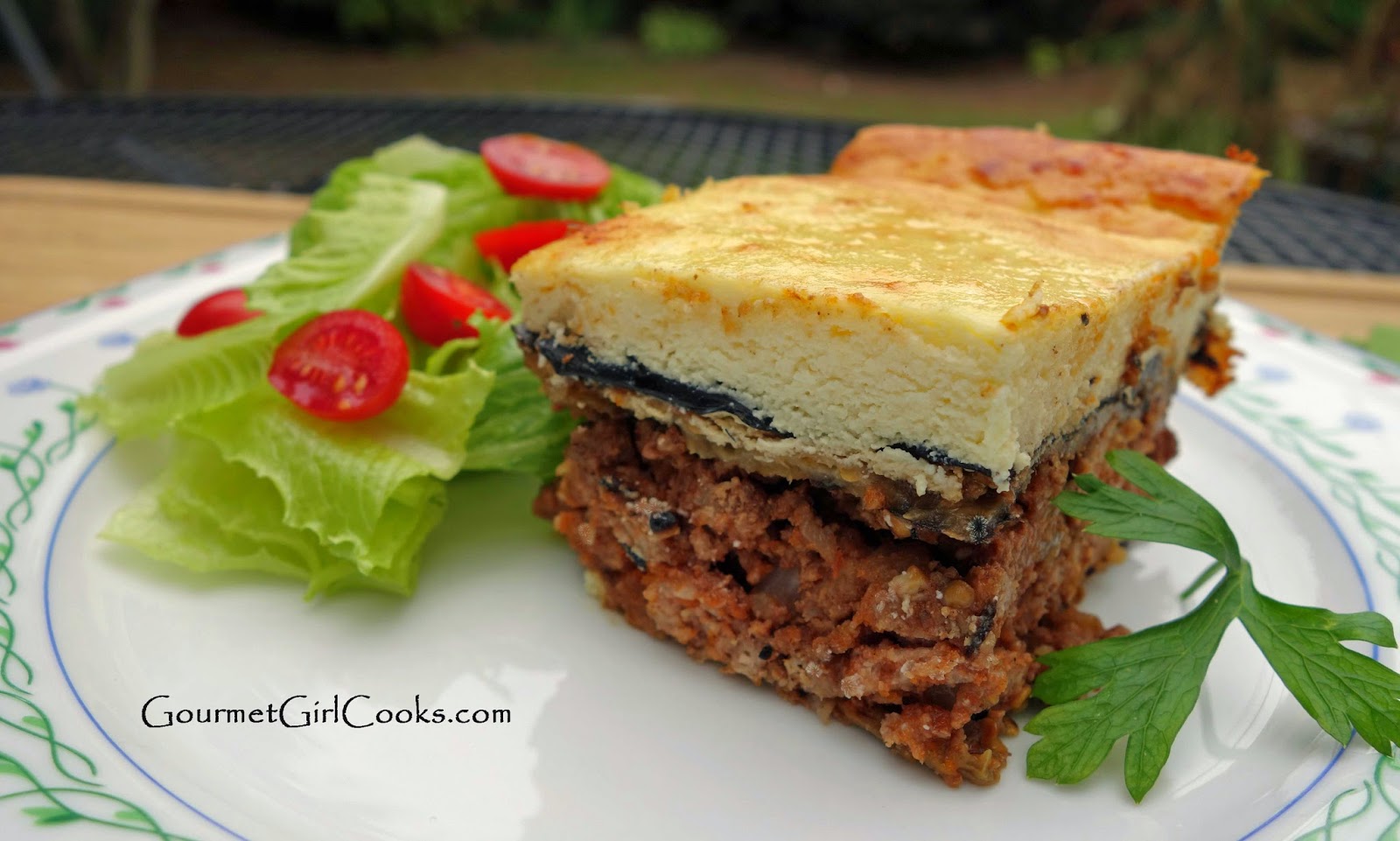 Brush each side of sliced eggplant with olive oil and sprinkle with salt and freshly ground pepper. Place the eggplant slices in a single layer on cookie sheet; broil until lightly brown; turn and broil the other side, brushing with additional oil, if needed until fork tender (alternatively, eggplant can be grilled). Arrange half the eggplant slices in the bottom of prepared baking dish; set aside.

While eggplant is cooking, in a large skillet, brown beef and onions; breaking beef into small pieces as it cooks. Cook until the beef is no longer pink and the onions are soft and translucent; add garlic and cook a few minutes more. Add tomato sauce, oregano, cinnamon, 1/2 teaspoon salt and black pepper (to taste); simmer uncovered about 10 minutes (there should not be much liquid left). Pour meat mixture over eggplant slices. Arrange the remaining eggplant slices over the beef mixture.


To make the bechamel/cheese sauce, in a medium bowl, whisk ricotta, eggs, 1/2 cup Parmesan cheese and dash of nutmeg until smooth and well blended; add salt and pepper to taste (careful not to over salt). Whisk in cream, to desired consistency. Pour the cheese sauce over the top of casserole and spread evenly. Sprinkle additional Parmesan cheese on top, if desired. Bake in a 350 degree F oven for 45 minutes. If desired, run casserole under the broiler for a few minutes to lightly brown. Let sit about 15-20 minutes to set before cutting into squares. Serves approximately 4 to 5.


***Note:  Even though 8 ounces of tomato sauce is not much, the tomato sauce is only used to flavor the meat and keep it moist; it isn't supposed to be like lasagna meat sauce.  If you prefer not to add cinnamon to the meat mixture, you may omit it; however it is the unique flavor that "makes this dish" and gives it authentic flavor. Be sure to cook eggplant slices until completely tender (this is not a vegetable that is pleasant undercooked unless you like chewing on erasers).

Ayla,
This was a very delicious dish. I really enjoyed the flavors of the cinnamon and nutmeg!!
Thanks

I just made this today.
Very delicious!

Thank you for the recipe.

This is a great recipe. My family loved it! The only thing I changed was cooking the meat with the onions and waiting for the liquid to be absorbed. Well that grease finds its way into the moussaka when you eat it. Cook the meat and take it out of the pan onto paper towels then cook your onions in olive oil and then mix the two together. Enjoy! Making it today for the second time. Will be making this a lot!