Today was a busy day. Breakfast was easy though because I just heated up a slice of my Roasted Tomato, Vidalia & Bacon Frittata leftover from last night's dinner. I do believe that it was even more delicious today than it was last night. Hubby said the same thing. Not sure if the flavors just had a chance to mingle overnight or what...but it was really good.

For lunch, we decided to try a new restaurant that was having it's "soft opening" today. I just happened to stumble upon that in my Facebook feed and immediately made reservations to have lunch there today. It was really good and a beautiful place, too. It felt like we were eating in a midtown (Atlanta) eatery instead of a place in the outlying suburbs. We enjoyed it and will definitely try it again for dinner once it is in full swing. For those of you that may live in the Atlanta area, it was called Parkside District. I had their "Double District" which was a double gourmet bacon cheeseburger made with dry aged beef, topped with Applewood smoked bacon and it had cheddar cheese and Vidalia confit in between the burgers. I had them hold the brioche bun it came with. Hubby had a Pork Belly BLT served on a ciabatta bun and they served hand cut fries alongside of which I admit to sneaking a few. I can't wait to go back and try it for dinner.

We also went shopping to Costco (big shock, right)? I wanted to let all you Costco folks know that I was pleasantly surprised (actually shocked) that they had fresh WILD Alaskan Sockeye Salmon for $9.99/lb. It was the exact same price as their farmed. I must say that I was quite shocked to find a number of people putting the anemic colored farmed salmon in their carts instead of the wild because obviously price was definitely not a factor. I do believe that there are still many out there that equate the word "farmed" with 'farm fresh" as in eggs, milk, etc. instead of farmed in overcrowded cesspools filled with toxins and wastes. I wanted to stop each of them and say something but I know it's none of my business so I just walked away stunned. Now, back to the wild salmon...I picked up 3 large packages that had 2 fillets in each package. Did I mention how excited I was??? I prepared it  for dinner this evening and kept it very simple. I decided to add an old favorite from my past to the lemon and butter...I used Old Bay Seasoning (the 30% lower sodium version). It turned out AMAZING! I didn't overdo the Old Bay because I wanted to enhance the salmon not mask it. It was perfect and I will definitely make it this way again. I guess it was sort of like the Cheseapeake Bay met Orca Bay in one delicious dish. I roasted two large fillets on the grill for about 11 minutes. I snapped a few photos and included the easy peasy recipe below. Enjoy! 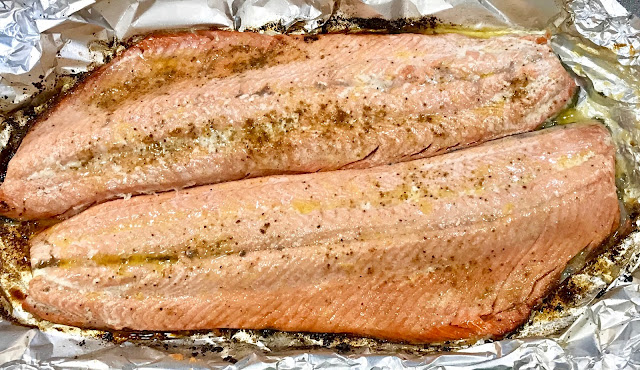 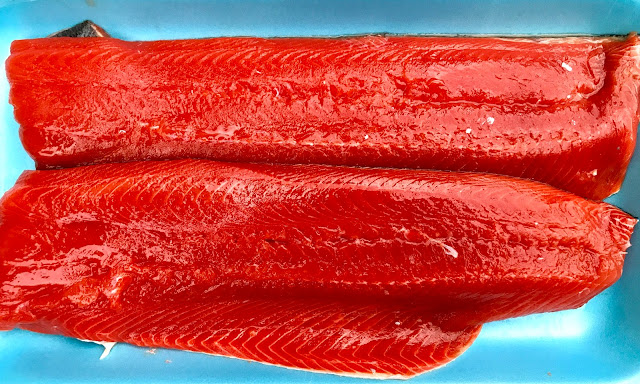 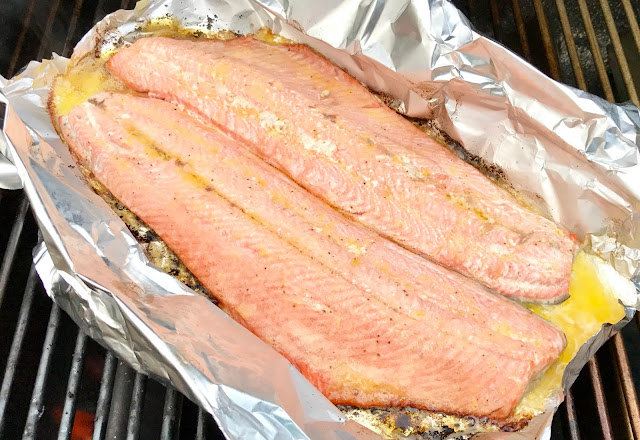 Place salmon fillet in center of large sheet of foil. In a small bowl, combine butter, lemon juice, and lemon zest. Stir in Old Bay Seasoning, to taste (I used a scant 1/4 teaspoon or less). Brush seasoned butter over top of salmon. Gently crimp and form foil into a packet around salmon fillet to hold butter and juices as it roasts (keep packet open on top while roasting). Place on hot grill and close lid. Try to maintain grill temperature between 425 and 450 degrees F. Cook for 10 to 12 minutes, depending on thickness of fish. Remove and transfer foil packet to a platter or baking sheet. Crimp and close packet tightly to allow salmon to continue cooking gently off the heat for about 5 minutes. Dust lightly with a pinch of additional Old Bay Seasoning, if desired.

I never would have thought about Old Bay + salmon. It sounds delicious and I'm going to prepare it that way next time.

Yup. What people do is a constant source of amazement, for sure. I couldn't believe my eyes a while back when they would by-pass beautiful Gulf shrimp in favor of "farmed," especially when they were exactly the same price. Go figure.

Hope you enjoy it CyberSis! I just picked up a large Coho salmon fillet last night and hope to make it this weekend. I think I'm going to use the Old Bay again! Hope your summer has been nice. It's been quite hot and humid here. Of all things...our upstairs a/c went out last week. It was actually 93 degrees on my 2nd floor...UGH. We found out a couple days ago that we need to replace the entire unit. Not fun! Hope you've had better temps than we have had. :-)

I feel for you this summer with your unbearable heat & humidity. We've lucked out pretty much this year. We've been using the A/C most of the summer but it's not been too awfully awful this year. We've been enjoying lovely unseasonably cool weather this past week, with another week to go. Temps next week are expected to be in the high 70s to low 80s with low humidity. :-) I imagine we'll get at least one more heat wave before fall comes.

What a time for your A/C to go out ... how miserable! Good luck getting it back on line SOON!

We actually had a few cool "teaser" mornings this past weekend with temps in the 50s in the morning. We can finally see that fall isn't too far away! Hoping our a/c gets fixed this weekend. Then it won't get used until next summer! Lol