I found this recipe MANY years ago from my Better Homes & Gardens "1976 Second Printing" Cookbook and over the years, I've adapted it to suit my family's tastes.  I have used this particular recipe for more than 20 years now...wow, that made me sound old for a split second!  I guess this recipe really qualifies as sort of a "retro/throwback" kind of recipe!  It also happens to be one of my oldest son's absolute favorite "comfort food" meal.  He likes to eat the leftovers cold too...and I must admit, I think it is really great cold as well!

I know that there are as many versions of tuna noodle casserole out there as there are stars in the sky...but this one was good enough to stick around for a really long time in our family!!!  It is pretty simple and I have modified it only slightly over the years to suit our tastes.  The original recipe called for pimentos, which we don't like so I removed them from the recipe.  I also add more noodles than the original recipe called for.  The original recipe called for mayo, but I like to use Miracle Whip (salad dressing) in recipes where tuna is used to help cut out or counter any potential "fishiness"....but you can use whatever you and your family prefer and it will be sure to turn out great.  I would describe this particular recipe as kind of like a "hot tuna noodle salad".  The veggies (celery, onion and green pepper) are still slightly crisp-tender after it is cooked.  If you don't like any crunch or bite to your veggies, then I would recommend you lightly saute them before adding them to your casserole (my youngest son hates "crunchy things" in his food, unless of course it is cookies)....but I personally like the texture that this recipe produces.  This recipe is simple...and I always double it when I make it....so below you will find the "already doubled version" which you can easily cut in half for less servings.  Enjoy!  ***(P.S. - even though the recipe states that the toasted slivered almonds on top are "optional"...in my opinion, it is actually what I like most about this recipe...so unless you have a nut allergy or absolutely hate almonds or nuts...give it a try with the almonds, I promise you will love them on there too!)

Below are pictures of the ingredients that go into this recipe -- most are items that you probably already have in your pantry and fridge.  I will add a photo of the actual cooked casserole later! 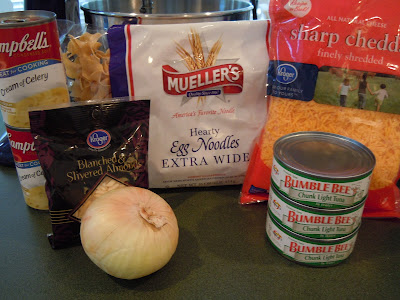 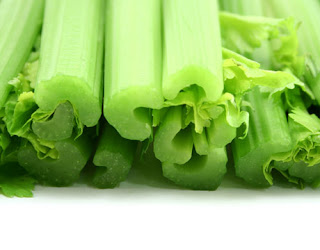 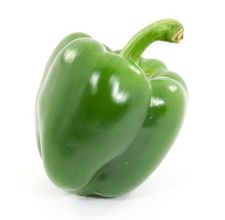 Directions:
Cook noodles in a pot of boiling salted water per directions (do not overcook); drain noodles and return to the pot and combine the noodles with the tuna, Miracle Whip (or mayo), celery, onion and green pepper; set aside.

In a medium sauce pan, blend together cream of celery soup and milk; heat through. Add cheese to the heated soup/milk mixture; heating and stirring constantly until the cheese melts (do not boil). Add the sauce to the pot with the noodle/tuna/mayo/veggie mixture and combine thoroughly.

Turn the mixture into an ungreased 3 to 4 quart casserole, spreading evenly.  Sprinkle with lightly toasted almonds (you can lightly toast them in the oven as it preheats but make sure they don't burn -- they will continue browning on the casserole as it cooks).

Bake uncovered at 425 degrees about 20 minutes or until hot and bubbly. Makes about 10 servings.
Posted by Gourmet Girl Cooks at 3:21 PM

That is sounding pretty darn good!