Today was a beautiful day here -- it got up to about 85 degrees.  This evening I was in the mood for something different for dinner and I was in the mood to cook.  Last night I didn't cook, because we had leftovers from earlier in the week for dinner, but I made up for it tonight, though!  I was in the mood for pizza, but not traditional sauce, cheese and "normal" toppings.  I hunted around in the fridge and found 1/2 of a bag of brussels sprouts (about 1 pound), a package of uncured bacon and a Vidalia onion (my favorite kind of onion...they are from Vidalia, Georgia). The wheels in my head began to turn...and I decided to go "off the grid" a bit.  I diced about 3 slices of bacon and browned them in a skillet, then poured off all but about a tablespoon or so of fat.  I tossed in about 1/2 of a sliced medium Vidalia onion and the brussels sprouts that I thinly sliced.  I browned and caramelized the onion and sprouts, seasoned them with some Celtic sea salt and lots of freshly ground black pepper...and then poured in about 1 tablespoon or so of apple cider vinegar for a little "twang".  I cooked the vinegar off for a minute and removed it from the heat.

I prepared my Almond/Flax/Parmesan/Herb Pizza Crust and flattened it between parchment paper to make it nice and thin...and baked it until golden and crisp and then layered a little provolone and gruyere cheese on it and popped it back in the oven to melt for a minute...then piled on half of the cooked sprouts, bacon and onions...then a little diced fresh mozzarella cheese...the remaining half of the sprout mixture and topped it with a tiny bit of Parmigiano Reggiano cheese. I layered the cheese in different stages to serve as a little glue to hold my sprouts together as it melted. I popped it back into the oven and cooked another 5 minutes; then ran it under the broiler for about 3 minutes to lightly brown. It was really, really good....and different, which is what I was in the mood for this evening!  The link to my pizza crust recipe is embedded above (in the different colored text). But...the exciting news is the dessert that I made when I got home from work. I made Pecan Tassies...one of our favorites, but converted the recipe to make it wheat/grain/sugar free! If you have never had them before, they are easy peasy little mini pecan pies (tarts). These turned out awesome! I am going to post their recipe and photos either later this evening after I write it up....or first thing in the morning....but I'll post one picture of them below, along with my pizza pics....stay tuned for the Pecan Tassie recipe in my next post (sneak peek below)! Enjoy! 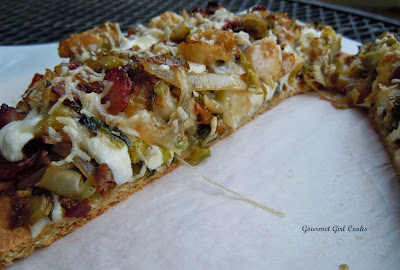 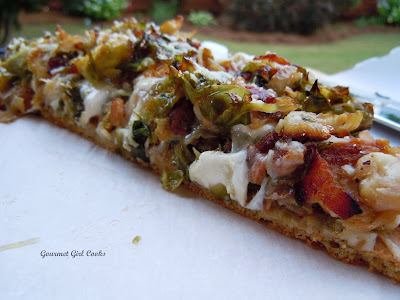 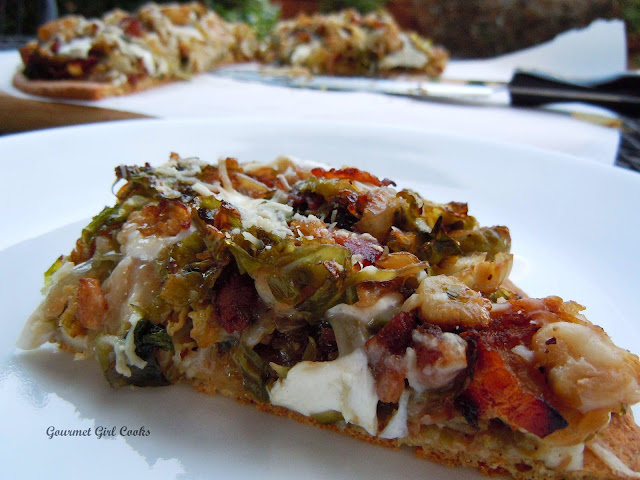 Hi GG, Got my pecans from Costco and I am ready to make these little beauties. Can you please tell me how many inches your molds measure across the top?
By the way Costco now carries a lot of "stuff" for our way of cooking. I went through every isle there, which I usually not do, and discovered so many things, even coconut milk and almond milk in 6-packs. Chia and golden flax seeds,
hemp nuggets, organic coconut oil etc.
Now I am forced to use the wine cellar to store all the finds. Hubby not happy!
Be well and safe, Barbara.

Hi Barbara! My 12-mini muffin pan is 10" x 7-3/4". The top of each mini-muffin "mold" is about 2" across. Does that help? Yes, I have noticed that they are carrying more things for our way of eating. I buy my golden flax there all the time -- it costs $7.99 for a 3-lb bag here -- is your price about the same? I've bought the hemp too and only used it once -- I know this is weird, but I am afraid to use it? LOL Is the coconut milk the canned kind or in the refrigerated section? Don't know if I have seen that yet. LOL about the storage -- I feel your pain! By the way -- if you have ever made these before with regular flour...you will notice that the dough is softer with the almond flour (make sure you chill it well -- at least an hour -- you want it stiff. I wondered when I pushed it out into the muffin cups if it would bake up the same -- and as you can see by the photos, it did! So don't worry if it seems softer than the regular dough -- it bakes up beautifully. Be careful not to put too much coconut in them since it is dry, you don't want it to soak up too much moisture in them. I'm even thinking that a few little chocolate chips could make them sort of like "German Chocolate" with a little pecan, coconut and chocolate! Maybe next time I'll try that. :-)

GG, thanks for the info, that size is great . 2 inches in Dia. is just right.
I was sick when I saw the prices at Costco, simply unbeatable. I ordered a 4 pack (25oz each )0from Amazon ,shipping was free and I paid $26.88 , so for 3 pounds it would cost $13.44.So you got a bargain! I should shop alone, I would save a bundle, but my husband is sooo focused, no browsing allowed. His famous remarks: that is not on the list!" We are total opposites .LOL.
I put the hemp seeds in my yogurt and did not care for it!
The coconut and Almond milk are sitting on a shelf, not in the refrigerated section

LOL, Barbara -- he sounds like a typical man -- shopping to them means...get in and get out...for me, it's like "what can I find here today"...and I tend to go up and down almost all the aisles (except for the tools/car stuff) regularly! LOL I somehow managed to spend $188 yesterday at Costco...and I am not sure how!!! But, when I look at the receipt (for a possible addition error...lol)...somehow it is always right! Maybe your hubby saves you money by wanting to stick to the list! ;-)