Since I had plenty of "Stuffed Eggplant Florentine" left from last night, I didn't need to cook dinner this evening. Instead, I tried to help recreate an old memory for one of my special followers, Elizabeth (a true WB cheerleader). When I recently posted one of my test creations of "Churro Chips" (still under construction)...she mentioned that when she saw the picture of them, they reminded her of the delicious leftover pie scraps her mother would roll in cinnamon and sugar and bake into delicious treats. Until she reminded me of those, I had forgotten all about those not-too-sweet little goodies made with leftover pie dough. While the "chip" recipe I'm working on has the same flavors...it doesn't have the texture of pie crust...so there was only one way, as I saw it, to make something close...and that was to start by making PIE CRUST!  So, this evening, Cinnamony Pie Crust Squares were born! They don't have many ingredients and they don't take long to make...as a matter of fact, you could make the dough ahead of time or days beforehand and refrigerate it and then simply take it out of the fridge and roll it out and make them quickly if you wanted. The full recipe makes about 4 dozen little 1-1/2" squares. If you want to make a half-batch first to see if you like them, all the ingredients can be halved easily, except for the egg...in which case you can just use 1/8 cup of egg substitute (like Egg Beaters) to equal 1/2 of an egg.  Since these cookies are made with pie crust, they need to be rolled out between sheets of parchment paper...and while you could cut them into cute little shapes with cookie cutters if you wanted to, I tried to keep these more rustic and reminiscent of a simple cookie made with "scraps" so I just used my pizza wheel cutter to cut them into little squares. I rolled the dough to about 1/4-inch thick so they would be "crust-like" as they baked. If you want them more dense and less crisp, just roll them a bit thicker -- if you want them more crisp, bake them a bit longer. I hope you enjoy these simple little not too sweet "cinnamon-sugar" treats. These are for you, Elizabeth -- "almost as good as Mom's"...but I'm not fooling myself, because I know nothing is ever quite as good as when "Mom makes it." Enjoy!   :-) 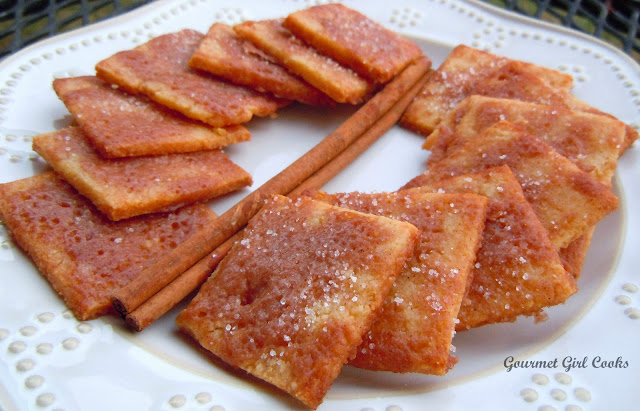 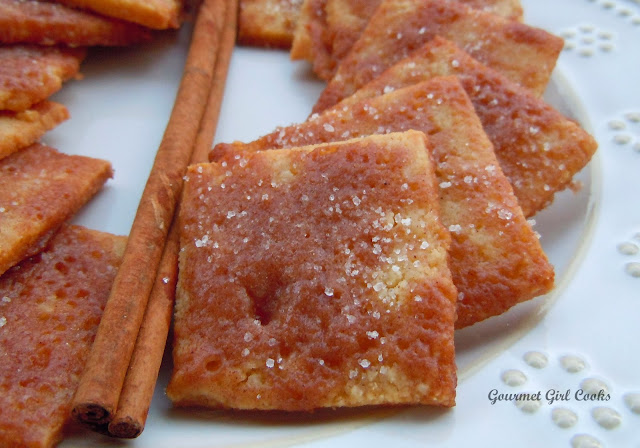 To make the dough, place almond flour, egg, 4 tablespoons diced butter, salt and 2 tablespoons Swerve Sweetener in a medium bowl and cut in using a dough cutter/blender until butter is uniformly cut in and a stiff dough forms. Form dough into a ball and place on a sheet of parchment paper; cover with another sheet of parchment and roll dough out to about 1/4-inch thickness. Using a pizza wheel cutter, cut rolled dough into approximate 1-1/2 inch squares and place in the refrigerator for about 30 minutes or in the freezer for about 15 minutes to chill (this will make the squares easier to transfer to the baking sheet). Preheat oven to 350 degrees F. and line a large cookie sheet or baking pan with parchment paper and carefully lift and transfer the dough squares to the pan (I used a small spatula); spacing the cookies about one inch apart.

To make the buttery cinnamon topping, in a small bowl mix melted butter, 5 tablespoons Swerve Sweetener, cinnamon and dash of salt until blended. Using a pastry brush, brush the buttery mixture evenly on top of each square. Sprinkle cookies with additional Swerve (preferably granular) by pinching with your fingers and sprinkling each cookie. Bake at 350 degrees F for 13 to 15 minutes or to desired crispness (do not burn).  Let cookies cool about 5 minutes, then transfer to a rack to cool. If desired, sprinkle cookies with additional Swerve immediately after removing from oven. Makes about 4 dozen cookies.

Oh, aren't these fun! My grandmother and mother made pie scraps into pinwheels with cinnamon, butter, and sugar. I loved them. Little cinnamon short breads. I'll have to give these a try.

Hi Kathy! Yes...I remember pinwheels, too -- but figured making simple squares would be easiest for most to make -- but the pinwheels are definitely prettier! Hope you enjoy! :-)

Yes ... these are bunuelos! (re: comment on Monday's post.) Or maybe more accurately, "bunuelo-ish"? :-) Only this is baked pie crust instead of fried. Thank you for bringing them back into my life without the toxic ingredients and deep-fried free radicals! I will love these baked crispy!

I love anything crispy, so these would be just the thing to bit into! And with cinnamon too, heaven! I will give them a try this weekend. I made your crustless Feta & Spinach pie and loved it.

Just came across your blog thru the Wheat Belly post. Looks like you have lots of good recipes. Can you Stevia for the sweetener? That's my sweetener of choice.

My mom used to make cheese straws with leftover pie crust and parmesan cheese. I might try that too - but after I make these; they look amazing!

What a great idea! I bet with just a tiny bit more sweetener, they'd taste like a cookie?

This is going to fulfill my yearning for Churros (mexican pastry!) Can hardly wait to try out your recipe tonight. On another note, will you please work up some Thanksgiving Dinner recipes in time for me to try them or test them, before the big day. I am super eager to see what you come up with for stuffing/dressing. LUB, LUB, LUB your daily "Gourmet Girl Cooks" emails. gotta admit, my all time favorite recipe since I've been following you for 3 months now....is your cauliflower mash. Blessings

Those are perfect -- I would need to eat the whole darn plate full! Cute!Thanx for posting :)

Hi CyberSis! Really? I had no idea! LOL If you want them real crispy without burning them, you could maybe bake them at a lower temp, like 325 and cook them longer. I hope you like them -- let me know if you have any suggestions for making them more "bunuelo-ish"...LOL ;-)

Hi Sami! So glad you enjoyed the crustless spinach-feta pie! I hope you enjoy these too -- to make them even crispier (sort of cracker-like) you can cook them at 325 for a little longer so they crisp without burning. Besides the taste of cinnamon, I love the smell when it's baking -- makes the house smell so "homey". :-)

Hi henny penny! I think you could use stevia added to the melted butter and cinnamon mixture...you would just need to determine the correct amount since there is so much variation with brands, format (liquid, powder, drops, etc.). Let me know how they turn out if you make them with stevia -- I hope they turn out great! :-)

Hi Rhonda -- my hubby said the same thing -- his Mom used to make a savory version with cheese like cheese straws. I hope you enjoy these -- and I bet a savory version would turn out great, too. I told my hubby that next time I might try that, too. :-)

Hi Luana! Yes, if you added more sweetener, they would definitely be more "cookie like". Hope you enjoy them if you decide to try them out. :-)

Hi unknown...thanks so much for the kind words. I actually have a stuffing/dressing recipe on my blog from last Thanksgiving -- I will have to pull it out and give it another look to see if I can make it even better -- after all, I've had another entire year of wheat and grain-free cooking experience! Glad you enjoyed the cauliflower mash -- it's one of my faves and will definitely be on my Thanksgiving table! ;-)

Hi Patricia...LOL on eating the whole plate full! I try really hard to make them last! :-)

My mom used to make these when we were growing up! Oh how these bring me back. Thank you for this recipe so I can now share them with my little ones and still stick to a healthy way of eating. Baking season here we come! :)

Hi Donna -- you are right about getting to share a revised "old favorite" with your little ones. I love the smell of cinnamon baking -- it is one of my favorite "baking season" aromas. I hope you (and your little ones) enjoy them! :-)

Hi, Thanks for all the recipes. You usually post the "nutrition" for your recipes. Do you happen to have that info.? I'm being lazy and not calculating it myself. :-)
Teri