This evening I put together a quick and fairly simple meal. I seasoned 6 chicken breast cutlets with salt and pepper and quickly sauteed a few minutes on each side in a bit of olive oil and then transferred them to a platter. I melted a couple tablespoons of Kerrygold's Garlic & Herb Butter in the hot skillet and scraped the little brown bits int he pan as it melted and then squeezed the juice of half of a lemon in with the butter and then tossed in a few tablespoons of capers. I put the chicken cutlets back into the pan with the lemon butter caper sauce to keep warm while I prepared the Brussels Sprout, Bacon & Babybel Gratin. It was super simple to put together. I cleaned, trimmed and halved a little over a pound of brussels sprouts and then steamed them in a couple tablespoons of water in a covered casserole dish in the microwave for about 7 minutes until tender (but not mushy). I drained them and tossed them with some butter, salt and pepper and placed them in a shallow baking dish and poured cream over top of them. I diced 5 mini Babybel cheese rounds and scattered those on top and then made a crumbly topping using almond meal cut in with butter, salt and pepper. I topped the casserole with the crumb mixture and baked it for about 20 minutes until it was rich, thick and bubbly. It was so good, yet so simple. It was a great combination of flavors, too. 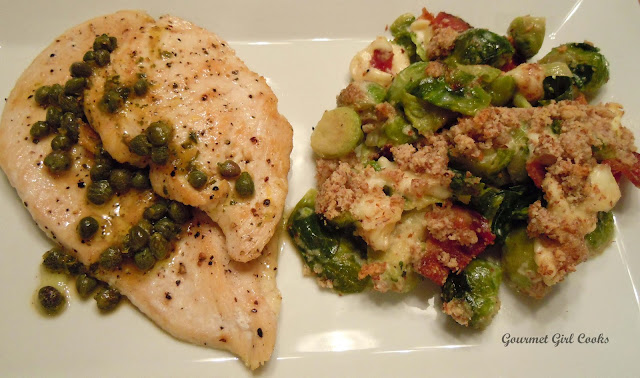 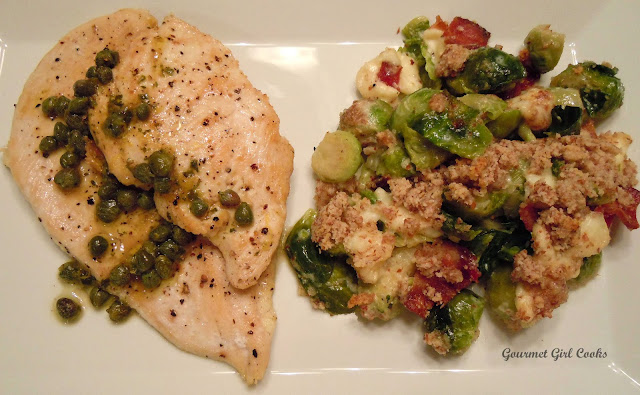 Directions:
Preheat oven to 350 degrees F. In a covered microwave-safe casserole, steam brussels sprouts in 2 to 3 tablespoons of water for 5 to 7 minutes until tender; drain. Toss the brussels sprouts with 2 tablespoons of butter and stir in bacon; season with salt and pepper, to taste. Place buttered brussels sprouts in a shallow 1 quart casserole; pour cream evenly over sprouts and top with cheese.  In a small bowl, cut remaining 2 tablespoons butter into almond meal using a dough cutter/blender until crumbly; season with salt and pepper. Sprinkle buttered crumbs evenly on top of casserole and bake for 18 to 20 minutes or until bubbly and lightly browned.
Posted by Gourmet Girl Cooks at 10:31 PM

Email ThisBlogThis!Share to TwitterShare to FacebookShare to Pinterest
Labels: Side Dish Recipes, Vegetables and Sides Recipes

Hi GG, I am back!
You have been busy , so many nice recipes to try- so little time!
I wanted to tell you that Swerve has a sale on their * BULK 22 pounds* for $ 154 . However the granular swerve is sold out and only the confectioner version is still available. Could I use the latter one for baking, or does it have to be granular? Your help is appreciated!
Barbara.

Hi Barbara! Welcome Back!!! Yes, the confectioners version works well for baking -- as a matter of fact, that's the one I use now most of the time. You know sometimes, granular erythritol can get a little gritty textured after you refrigerate it (like in a pumpkin pie, for example). I've found that the confectioners version doesn't do that much or it isn't noticeable. If you have granular you can grind it and powder it in a Magic Bullet type of small blender -- rather than do that, I mostly use the confectioners. I think I have a bag or 2 left of granular, but I mostly use confectioners. Hope that helps! Hope you had a nice visit with your grandchildren! :-)