This evening I had lots of errands to run after work so I needed dinner to be super quick and easy. While hubby was on his way home I threw together 2 ingredients (3 if you count the butter) and literally made our dinner in less than 15 minutes. We ate as soon as he walked in the door and then headed back out to run all our errands without feeling pressured to eat out instead for convenience.

I had a package of Aidell's Smoked Chicken & Apple Sausages (nitrite/nitrate free) that I simply sliced and tossed into a large nonstick skillet with a little butter and browned them until nice and caramelized on both sides. Then I opened up a large 2-pound bag of coleslaw mix (by Taylor Farms) and dumped about half of it on top of the sausages and stirred it around, added about 1/4 cup water, covered and cooked over medium-high heat to allow the cabbage to steam and cook down until tender-crisp. The coleslaw mix consists of mostly green cabbage but also had shredded red cabbage and some grated carrots in it as well. I added a little more butter and uncovered the skillet to allow any remaining liquid to completely cook off. Voila...dinner was ready in 15 minutes.

I frequently make Stir-Fried Sausage & Sprouts...but this version was even easier to prepare since I used a bag of coleslaw mix which didn't require any prep like necessary when I make it with sprouts. I snapped a couple quick photos below. It's nice to have food available to put a quick dinner together when you're in a pinch, and believe it or not, something this simple turned out so tasty. I can't wait to have leftovers for tomorrow's lunch. I included the easy peasy recipe below. Enjoy! 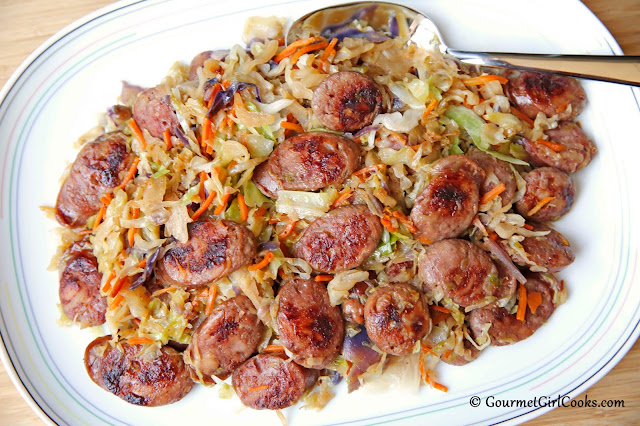 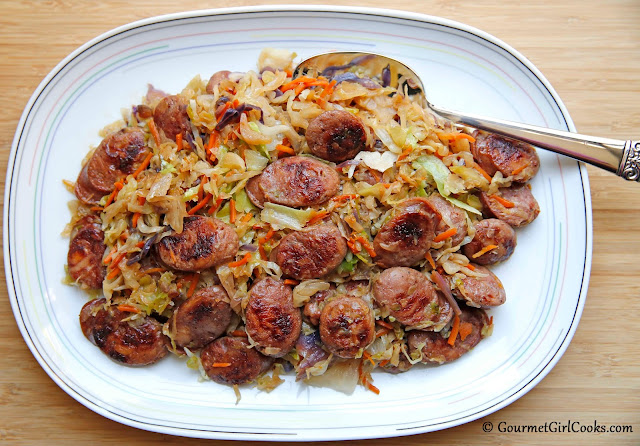 In a large 12-inch nonstick skillet or wok over medium-high heat, melt 1 tablespoon butter and add sliced sausage links. Cook, stirring frequently until browned on both sides, about 5 to 7 minutes. Stir in coleslaw mix and about 1/4 cup water; cover and cook until cabbage is tender-crisp or desired doneness, about 5 to 7 minutes. Uncover and add remaining butter and cook another minute or until all liquid is cooked off.

This looks so delicious. Never would have thought I would want anything with link meat. It does look yummy!

Thanks! I know, I was never really wild about link-type sausage but I really do like these Aidell's smoked chicken sausages. They have a variety of different flavors to choose from. :-)

I am cooking this right now for our lunch today. Your blog is my go-to for wheat-free ideas and low carb. I already know just by testing, I am going to keep this one in a weekly rotation. Thank you for your great ideas and culinary expertise. I love your photography, too.

Hope you enjoy it. I love when something this simple tastes so good, too. So happy you are enjoying my blog (and photography). Thanks so much for all the kind remarks! :-)