This weekend was a busy one -- I've been working on a number of different projects around the house as well as trying to do some behind the scenes work and house cleaning on my blog (when the truth is my house probably needs it more than my blog does...LOL). I didn't even get around to my Costco run until late this afternoon...so rather than stress about what I was going to make for dinner, I kept it super simple. My youngest son came for dinner tonight but said he wasn't going to stay long...and he wanted to try my lasagna that I had made Friday night. I reheated a piece for him (he had already read my blog post that night about wanting to secretly spring it on them without telling them...LOL).  Most of the time they don't read my blog posts -- they see the pictures in their Facebook feeds...what are the odds that he read THAT post???  Well, even knowing that they weren't regular lasagna noodles, he still liked it -- and he is the one that isn't crazy about beef. His only remark was..."I can't tell the difference" (between this and regular noodles) and "there sure is a lot of beef in here"...LOL. But, he ate every single speck of it! Hubby had the lasagna as well and said it was just as good reheated. While I was at Costco late this afternoon...I picked up an "emergency rotisserie chicken"...and it was an emergency chicken in the fact that I wanted to have it as a back-up plan "just in case". I love having my kids over and cooking for them...but they are notorious for waiting to let me know they are coming until 5:00 or 6:00 in the evening when they are already on their way! I guess they assume that my favorite kitchen gadget is my "magic wand"!  LOL  You have no idea how many YEARS I continued cooking for a family of 5 when there were only 2 of us here much of the time (because they were either away at college or living on their own). I continued cooking for a family of 5 up until the last year or so "just in case" one of them came by. Anyway, I pulled some of the chicken breast meat off of the "emergency rotisserie chicken" and placed it in my little artisan romaine lettuce leaves, topped it with some fresh salsa, shredded cheddar cheese, tomatoes and then added a little sour cream and avocado as I ate them. While these weren't "official tacos" in that I didn't simmer the meat in taco seasoning...they were super simple and quick to make and I didn't freak myself out trying to pretend I had time to make a meal that I didn't have (since youngest son arrived shortly after I returned from Costco and had to leave within a couple of hours so he could rush back home to watch a Braves game)!  I snapped a quick photo of my super simple meal below. Enjoy! 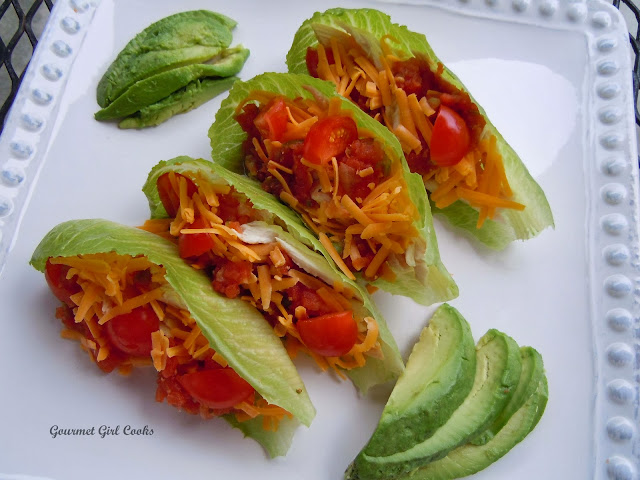