Wow...long time no see, right? It has been a few days since I last posted anything. I have gone Christmas shopping after work every single night this past week and not gotten home before 10:00 p.m. totally exhausted. My menu for the past few days has consisted of leftover pizza one evening, turkey and cheese roll-ups another evening and scrambled eggs with cheese & bacon bits last night. Basically enough to sustain...but certainly not very enjoyable after being on the go for a total of 16+ hours for 4 nights in a row!!! So, while I do plan to do some shopping this evening, too...I decided that I could not go another night without a REAL meal. I wanted vegetables...I wanted something on a plate that I ate with a fork...that tasted good and had COLOR (festive color at that)!  LOL Since I got home about 30 minutes before hubby this evening...I decided to  make a quick dinner that would be ready when he walked in the door and we would eat, walk the dog and then continue our holiday shopping. I am doing a quick post of our dinner this evening while hubby walks the dog. It was so good to have a sit down meal...I can not even tell you. It was also nice to eat before getting worn out rather than after. I had a bag of fresh brussels sprouts in the fridge and a package of Aidell's smoked chicken sausage links with habanero and pepper-jack cheese. I had part of a red bell pepper and a wedge of onion in the fridge...so I sliced 4 sausage links, thinly sliced about 1/2 cup of onion, thinly sliced about 1/4 of a large red bell pepper and sauteed the pepper and onion in a bit of olive oil until translucent and the onion began to caramelize and brown. While that cooked, I trimmed and quartered about 1 pound of brussels sprouts (I quartered them because they were larger than I usually buy). I put them in a covered glass casserole dish with a couple tablespoons of water and steamed them in the microwave on high for about 4 minutes until bright green and "crisp-tender". I added the sliced sausage to my cooked onions and peppers and browned it together a bit (the sausage is fully cooked) and then added the sprouts and stir-fried everything together until the sprouts cooked a few more minutes and were cooked but still had some bite. I seasoned it with salt and pepper and added a few pats of butter and tossed it around...it was delicious...it was dinner...it was colorful...and I realized how much I missed having a real DINNER! It took me less than 30 minutes. Tomorrow I am planning to make cheesecake...I made it last Christmas and never posted it -- it is still in draft and I don't have any pictures since I was so sick with the flu last year. I am making it again and tweaking it a bit this year...I can't wait! So...be on the lookout for my cheesecake post this weekend. Check out the pictures of my dinner below (and my office pizza lunch). Now...I'm off to shop until I drop.  Enjoy! 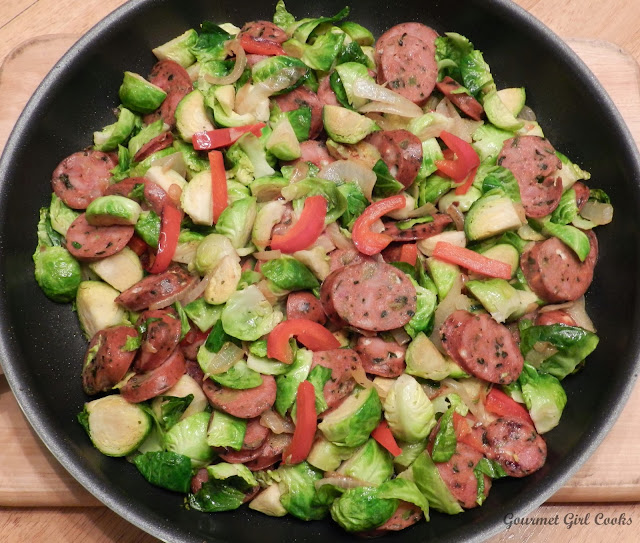 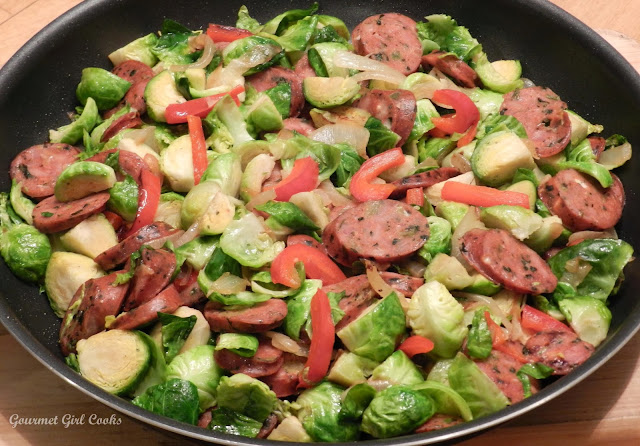 P.S. -- I mentioned earlier in the week that we had an office pizza lunch -- and I told you that I made my own little wheat/grain free pizza to enjoy along with the group -- check out my pizza among the two 28-inch and 20-inch pizzas. Can you guess which one was mine? The pretty one, of course!   ;-) 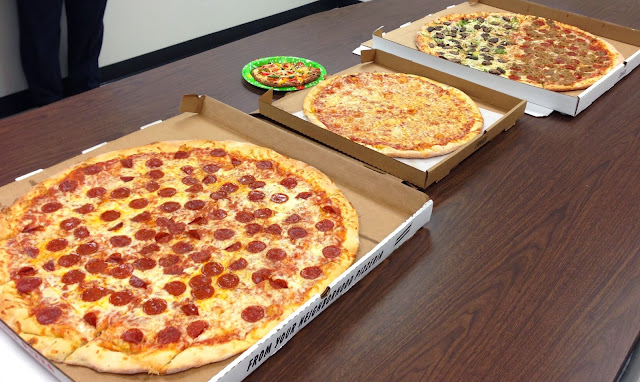 I will try this. I have been eating this kind of sausage , except with brown rice - I am wheat free, but going grain free is more difficult for me. Thanks for the recipe. You have become my go-to girl for wonderful eating. Really looking forward to your cheesecake recipe. I want to share in some of the yummies of Christmas time...just made cookies with my kids and didn't try any of them - that's hard - old habits want to creep back lol (I've been wheat free since June)

I'll bet that when you ate yours you were satisfied instead of being full, bloated but still wanting to eat more! I'll take yours any day of the week!

Thanks! You are right -- I ate half of my pizza and felt great -- while some of the others had indigestion! I didn't miss anything and enjoyed mine! :-)

Hi Nicole -- When I first went grain free, it was difficult in the very beginning...but after a period of time (a few weeks) it became easier once I lost the cravings that come with eating carbs, sugars, etc. Congratulations on being wheat free for 6 months! I bet you could go grain free more easily than you think once you decide you are ready. I have an awesome chocolate chip cookie recipe that uses almond flour and Swerve sweetener if you have those ingredients. I am getting ready to make my cheesecake here shortly -- got back late from Christmas shopping this afternoon. :-)

Well, I modified your delicious recipe by adding chopped pieces of grilled pork loin leftovers instead of sausage, something I had on hand - and lightly steamed fresh Brussels sprouts cut in half - then all was stir fried in coconut oil with a large clove of chopped garlic, a bit of chopped onion and a sprinkle of red pepper flakes. Delish.
You are an inspiration. Thank you for coming up with such wonderful combinations.

Thanks, Linda. Your version sounds delicious! It's amazing how something so simple can taste so good, isn't it? I love brussels sprouts and like finding different ways to enjoy them...glad you like them, too! :-)