It was a beautiful bright and sunny spring day here today. When I got home from work this evening I wanted to make something fairly simple for dinner. I had some leftover cooked chicken breast in the fridge (from a rotisserie chicken). I decided to make chicken salad (which I love), so I began chopping the chicken up along with some celery, onions and red bell pepper. I took out some mayonnaise and proceeded to make basic chicken salad. As I mixed it together I wondered if there was a way to make a cross between chicken salad and a burger. I continued on and mixed about 3 cups of chopped chicken with my diced celery, onions and red bell pepper. I mixed it with a little mayonnaise and seasoned it with salt and pepper. I decided to experiment a little to see if I could transform my chicken salad into burgers. I added a lightly beaten egg to the mixture as well as about 1/4 cup of blanched almond flour to serve as a binder to make it easier to form into patties that would hold together. At this point I was really hoping and praying it would turn out half way decent considering I had just put a raw egg into my chicken salad...LOL. To make them a little zippy I started to add some cayenne pepper to the mixture but stopped and added about 1 tablespoon of my spicy garlic and red pepper infused olive oil instead (either would work fine). To my surprise, I was able to make beautiful patties with this mixture. I heated a mixture of olive oil and coconut oil in my skillet and browned the patties until golden brown on both sides. They turned out beautiful and delicious. I served them topped with some fresh lemon zest and diced raw red bell pepper to add a little extra crunch and natural sweetness. I really love the fresh hint of citrus flavor that the lemon zest added. It balanced the spiciness of the Chicken Salad Burgers beautifully. I initially steamed some broccoli to have alongside these burgers but instead opted for a second burger in place of the broccoli...they were too good to stop at one which is very unusual for me! I am already looking forward to having a leftover burger cold for lunch tomorrow! I snapped a few photos and included my easy peasy recipe for the burgers below. Enjoy! 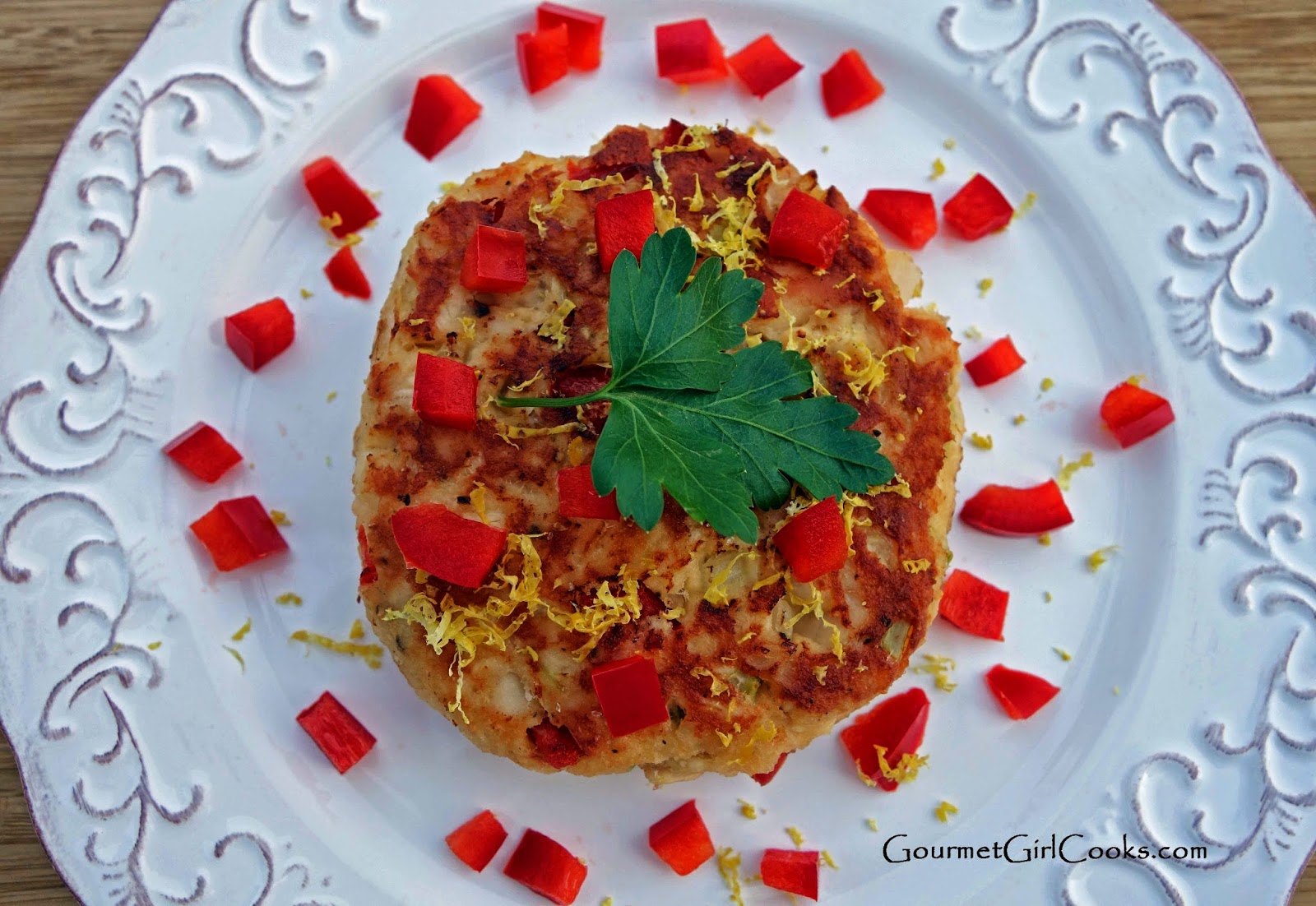 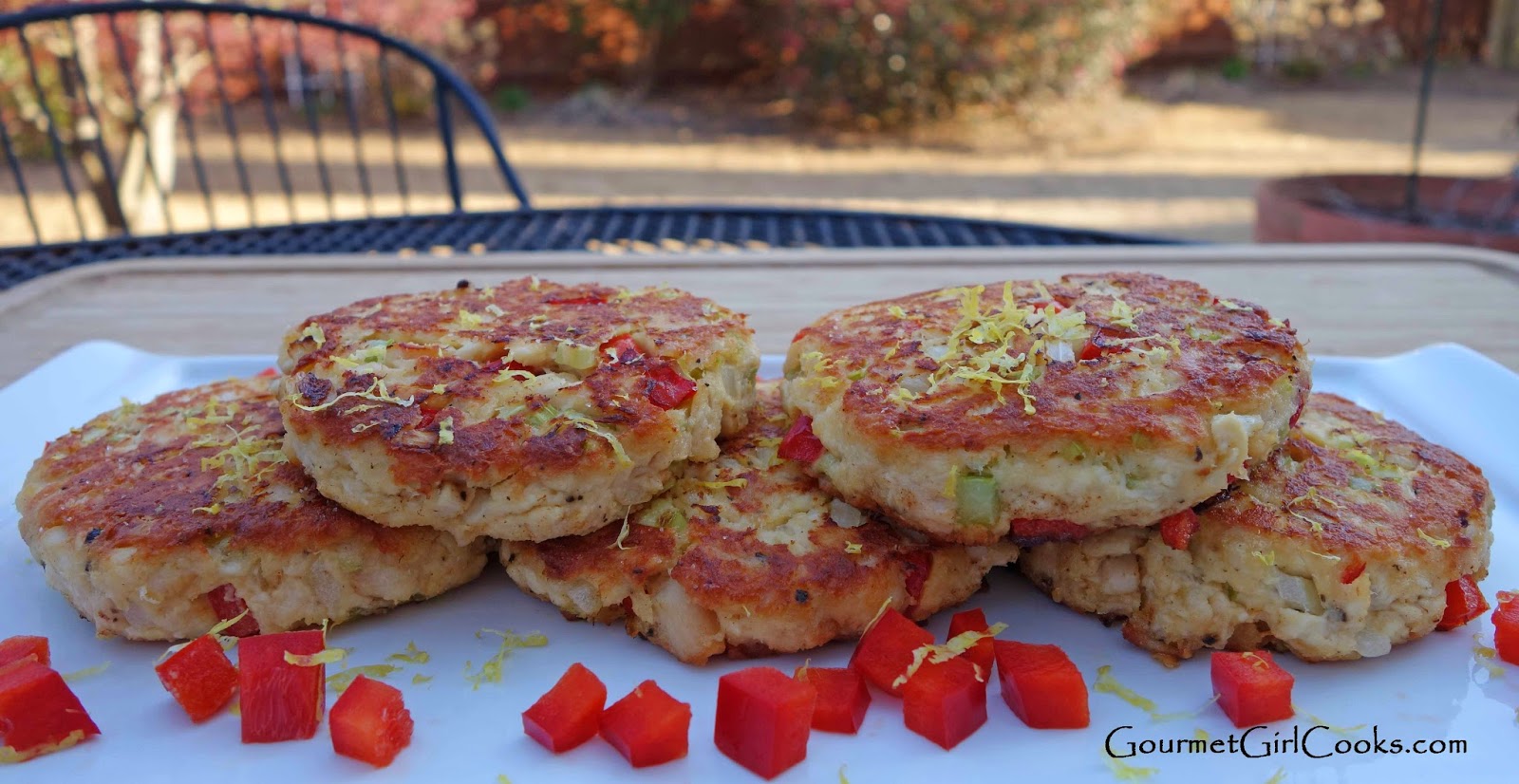 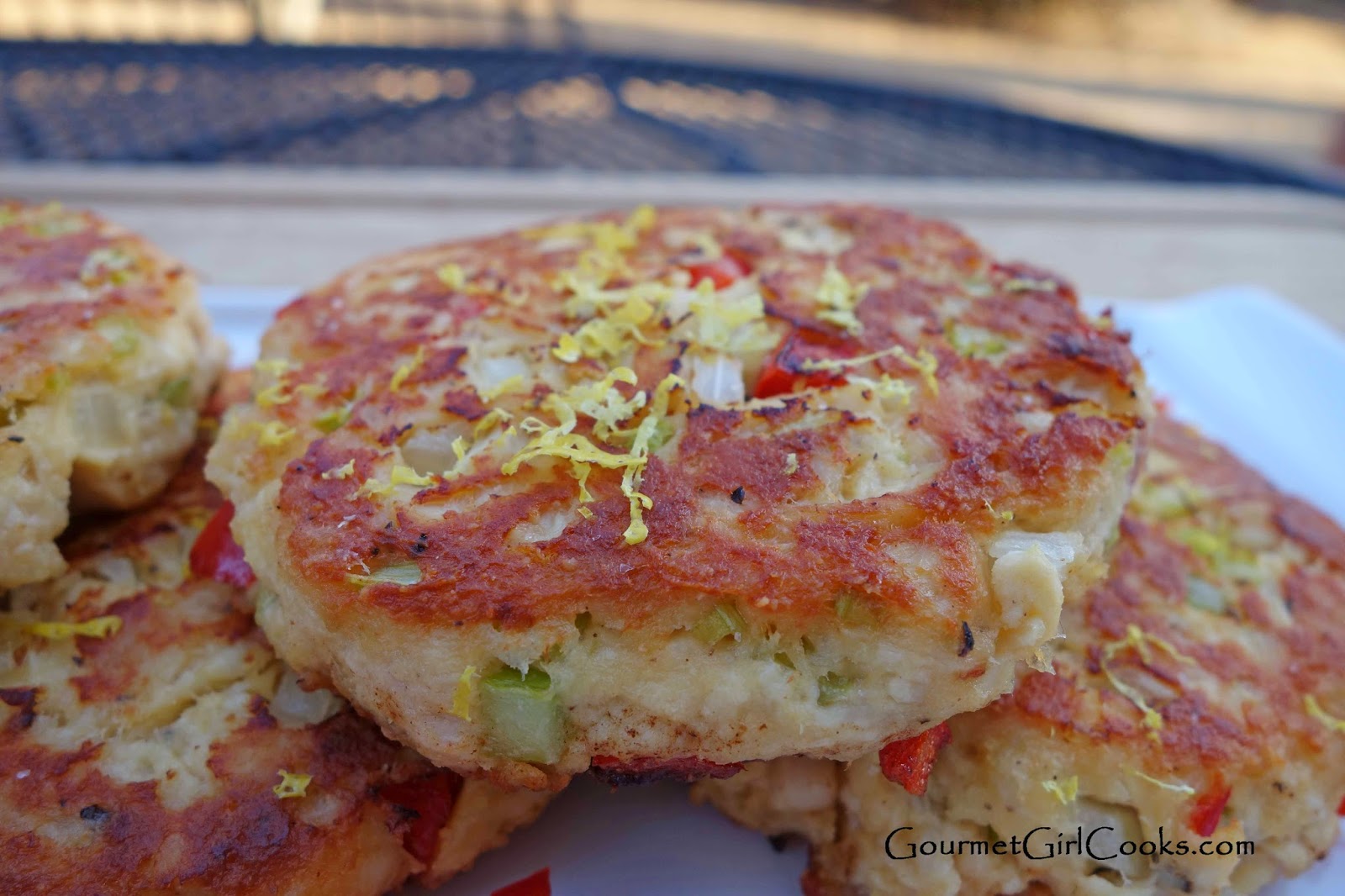 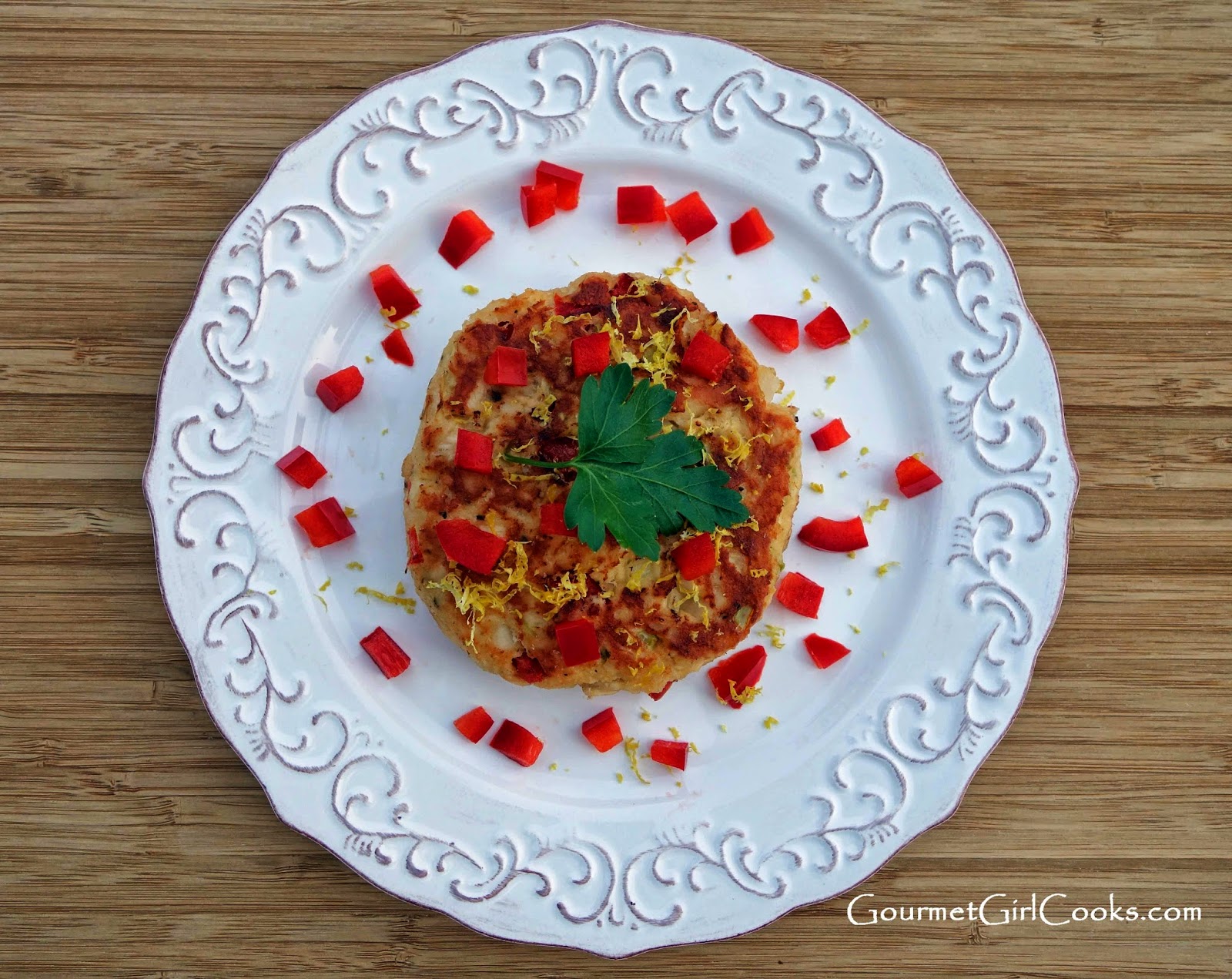 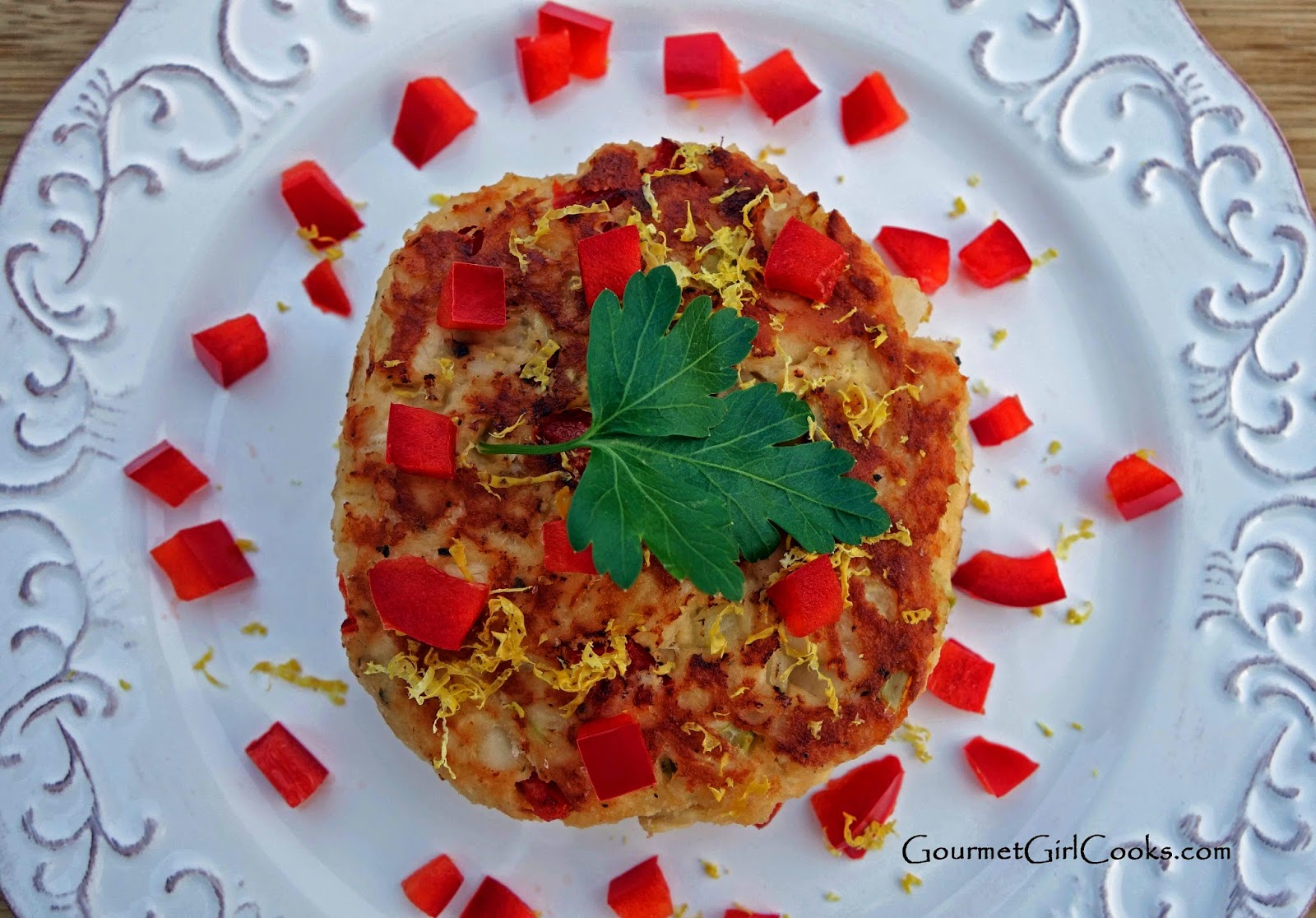 In a large nonstick skillet, heat 2 to 3 tablespoons oil over medium-high heat until hot. Carefully place patties into skillet and cook until golden brown, about 5 to 6 minutes; flip and cook an additional 6 minutes or until golden brown. Transfer burgers to a platter or plate. Serve topped with diced red bell pepper and lemon zest, if desired.

What a brilliant idea! Sometimes leftover chicken breast can seem a little dry to me, even in chicken salad. Turning it into chicken burgers with the addition of an egg sounds perfect!

Thanks, Kath -- I agree (about it sometimes being dry). I enjoyed using it this way and really enjoyed eating one of the leftover burgers cold for lunch. :-)

Wow! I have often thought about cooking my chicken salad, especially this winter when it has been sooo wintery, but I just had to have my chicken salad anyway. Well, thank you for your courage to go ahead with this idea. I am going to make some tomorrow!

Hi Erica! I guess great minds think alike, right? ;-) Hope you enjoy it -- I am looking forward to having another leftover burger for lunch tomorrow! :-)

This recipe is delicious! I have made it four times this past month :) I've been having trouble with it binding and my burgers rarely look as nice as yours. Do you have any tricks for getting it to stay together better?

Thanks, Mariah! Hmmmm...is your mixture not binding well because you think it might be "too wet" or possibly "too dry"? Do you get an idea for which it might be? If too wet, either slightly reduce the mayo or add an extra tablespoon or so of almond flour. Also, are you chopping your chicken fairly small? I did - larger chunks might not hold together as well as smaller chunks. Let me know what you think is keeping them from binding as well and maybe we can figure this out. :-)

I'm a home chef, I made a boatload of chicken salad from some freshly poached chicken salad - gonna knock out a few burgers tonight. Thinking of adding some crushed panto and curry.

I made this tonight while looking up a similar idea and it's so good! Thank you! I put them on pretzel buns!