Happy Sunday! Today's dessert recipe is one that takes me down memory lane. Years ago when my 3 children were younger and I lived out in the suburbs of Washington, DC, I used to have a really big garden. It was full of many different varieties of tomatoes, zucchini, yellow squash, green beans, eggplant and other veggies. I was never very successful at growing watermelons or cantaloupes for some reason. I even grew corn one year. Besides tomatoes, one of my yearly bumper crops was always zucchini. It grew like crazy and if you turned your back on it for just a second, you literally had "big green baseball bats" in your garden where the zucchini was just a day or two before! LOL We always had tons of fresh produce that we gave away by the bagful. I think neighbors ran when they saw my kids pulling their loaded little red wagon down the street.

I found all kinds of ways to use zucchini. I made tons of zucchini bread and froze it to pull out throughout the fall and winter months. I even found ways to sneak it into almost everything so my kids wouldn't notice it. I diced it and browned it with the meat when I made meat sauce for spaghetti or lasagna. I tossed it into chili and quiche...pretty much everything you could think of. One of the sneakiest ways I used to use it was in a simple "snack type cake." I used to make a Chocolate Zucchini Walnut cake which was a chocolate cake that was topped with chocolate chips and walnuts instead of frosting (baked in a 9" x 13" pan). They loved that cake and I loved that it had veggies in it and they had no clue! I had come across the recipe in a magazine one day and tore it out to try. Yesterday I revamped that old cake recipe to make it grain free and without added sugar. The only sugar contained is in the 1/2 cup of 70% chocolate chips that I scattered on top. If you wanted to, you could swap out Lily's chocolate chips that are sweetened with stevia to remove all sugar. It turned out amazing! It's nice and moist and chocolatey just like I remember. I did not make it as sweet as I used to. The original recipe had 2 cups of sugar. I used 1-1/2 cups of Swerve sweetener instead and it was plenty sweet enough for me. I snapped a few photos below as well as included the easy peasy recipe. Enjoy! 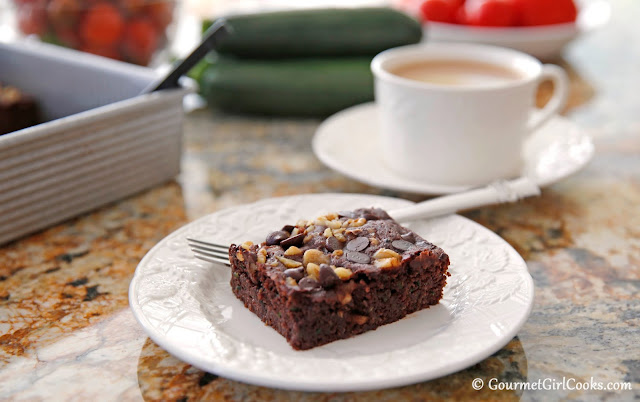 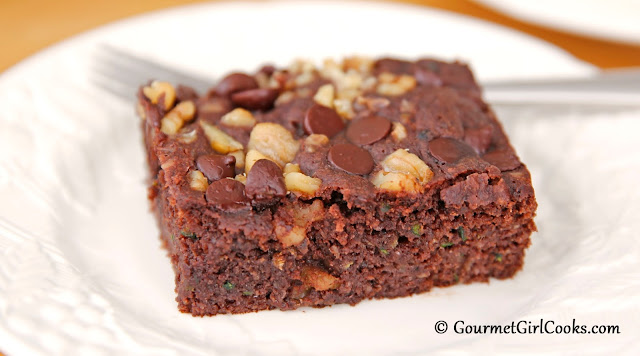 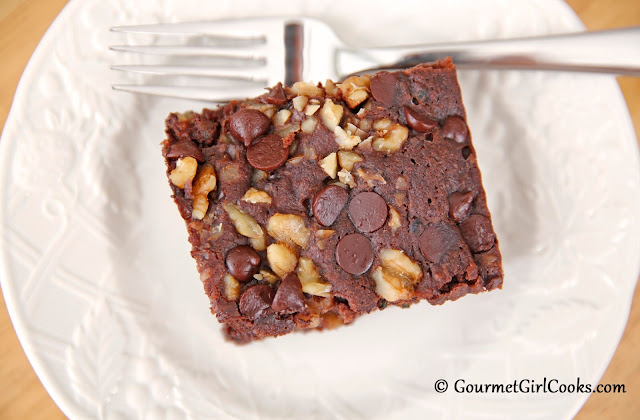 Whisk almond flour, ground flax, cocoa powder, sweetener, salt, baking soda and cinnamon together in a bowl to break up any lumps.

In a separate bowl, beat eggs, vanilla, buttermilk and oil together. Add wet ingredients to dry ingredients and beat well. Stir in zucchini. Pour batter into prepared pan and spread evenly with a spatula. Sprinkle top with walnuts and chocolate chips.

Bake for 35 to 40 minutes, or until toothpick inserted in center comes out clean. Cool in pan. Serve topped with a dollop of whipped cream, if desired.

*Note: If desired, sugar free chocolate chips can be used (like Lily's). If a sweeter cake is preferred, increase the sweetener by 1/4 cup, or to taste. 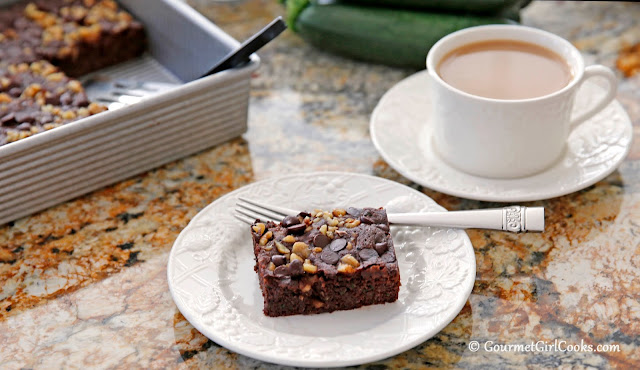 Do you not have a garden now? Sounds like you were almost a farmer. HA!!!

Oooooh, a "Just in Time" recipe! We have zucchini galore right now! I'm trying to find new ways to use it up. I even looked up zucchini pickles on Pinterest today (I found one that sounds really good).

LOL I remember sneaking vegies into food so my kids wouldn't know. I remember doing a spaghetti sauce with eggplant that I blended up so it didn't have any texture. I remember my son loving that sauce (and now 25+ years later I've never "spilled the beans"). Hey we do what we have to do, right? :-D

When I was reading your email I had a "duh" moment and wondered why I'd never thought to freeze some zucchini bread, muffins, cookies to be able to enjoy in the winter. You are a GENIUS! Thank you for the wonderful idea.

Your picture of the Zucchini Walnut Cake looks wonderful and is definitely going to go into my week's baking.

No, I do not have a garden now. The most I've done is grow tomato plants and herbs in pots but I don't even have that this year. I really miss have them too. LOL Well, not quite a farmer but I had a very nice garden. :-)

I do remember those days with zucchini coming out of our ears it seemed. I kind of miss it though. The zucchini bread froze so nicely and it was so nice pulling it out when the weather was chilly. It's basically a nice moist nutty spice bread so I loved it year round.

LOL on blending eggplant into your sauce, too. GREAT idea. What you realize with kids is that oftentimes it is the "idea" or "name"...like eggplant that turn them off but when they don't know what they are eating but simply like it...well, that's the telltale sign that it's good.

Both of my grown sons came for dinner tonight and LOVED this cake...just like they did when they were younger. They each had 2 pieces BEFORE dinner! :-)

LOL ... "big green baseball bats"! :-D
BTW, the best defense against neighbors bearing zucchini is to grow your own! ;-)

Thanks. Very true about growing your own to defend against the neighbor's zucchini. Although, I'd be lying if I didn't admit that I wish I had one of those neighbors bearing zucchini now! ;-)

Yes, the golden flax seed meal should be the same (ground up golden flaxseeds). Should be powdery like a flour instead of like a bunch of little sesame seed like things. Hope you enjoy it! :-)

What is the suggested serving amount please. I can't wait to make it. As usual you have given us a wonderful recipe. Thanks for all your hard work.

Approximately 16 servings. I hope you enjoy it! :-)

Did you know that August 8th is the "National Sneak-Some-Zucchini-onto-Your-Neighbor's-Porch Day"?

LOL...I can't stop laughing!!! To think that all these years I have missed that special day! And now, I'd give anything for a neighbor to sneak some onto my porch! ;-)

Great cake made it yesterday and shared it with my neighbor we all loved it.

Thanks so much! Glad you and your neighbor are enjoying it. I've been enjoying it this week as well. :-)

This sounds so good. Chocolate zucchini cake was my younger daughter's favorite cake when she was little. We all loved it, but it was loaded with canola oil and sugar!!!I

I'm curious. Did you wring out some of the liquid before you added the zucchini to the other ingredients?

We had this tonight after supper and we both loved it! Moist, chocolatey, and the perfect amount of sweetness. I love the chocolate chips and toasted walnuts on top, too. I made half a recipe in a 6-cup rectangular Pyrex dish and baked it at slightly less than 350 for 35 minutes. Our Egg Lady's eggs usually come with different sizes in the same carton. I really like the variety because I was able to use 2 *small/medium* eggs in my half-recipe. It worked great.

I have a theory that will be put to the test tomorrow ... that this cake would be fabulous for breakfast! I may even have to do further research to see how it would be for lunch, too! :-)

I just saw this comment a few minutes ago. Not sure how I missed it??? Glad you both loved this cake. Great idea on using the smaller eggs for "halving" recipes, too. I say if people eat coffee cake, danish, donuts and other "sweets" for breakfast...at least this one has some redeeming nutritional value (veggies, antioxidants, protein, etc.)...LOL. Now, how is THAT for justification to "have your cake and eat it too!" I need to make it again soon. Some of these goodies that are a little "too good" to keep around on a regular basis I try not to make so regularly. This one is one of those but I think enough time has passed since I last made it. ;-)

I need to start doing that more often as well (half recipes). :-)

My hubby's birthday was a few days ago and he actually asked for this cake! I made your vanilla frozen yogurt (with chocolate chips added in) to go with it. It was perfect! :-)

Too funny, huh? Who ever thought anyone would request a "zucchini cake" for a special occasion...but my son did the very same thing last month!

Great idea making the frozen vanilla yogurt and adding chocolate chips to serve with it. I should have thought of that too! I just bought them vanilla ice cream and I didn't eat the ice cream. I feel like we have so much variety now with grain free eating that it's hard to remember how daunting it seemed when we began years ago.

PS - Happy belated Birthday to your hubby! He has excellent taste in cakes! ;-)

Do you know the nutritional info? I saw 16 servings.

Is there anything that can be substituted for the flax seed? I can't tolerate it and I hate to miss one of your recipes, because EVERY one that I have made has been WOND
ERFUL! The last one was the Irish Soda Bread. I was waiting for it to cool and my son wanted to know what smelled so good. I told him what it was and offered him some, knowing if I told him that it was gluten free he would say, "No thanks, I've had that gluten free bread you've made before." He cut a slice and LOVED it. My 4 year old grandson came in later and seeing the bread, asked for a "hunk". He said, "Yummy, I want to take some home with me, enough for Daddy, Mommy and me." My husband, hearing both comments said (after they left the room), "They really ate gluten free BREAD and LIKED it?" So .... he said, after swallowing his second slice, "Looks like you're going to have to make more. There is only a small slice left." Before all the "snarfing down" and I had not tasted it yet, I thought I would be several days in eating it myself. HA Thank you!!!!