Well, the heat has finally arrived in the Atlanta area...we have officially hit 90. Yuck! The first thing I thought about with our impending heat wave was making a frozen treat to enjoy. Earlier in the spring, Costco had these super cute little pop molds. They had 2 boxes of 6 each packaged together; 6 "rocket" pop molds and 6 "sailboat" pop molds. Today I decided to break in the rocket molds (I actually made them last night to freeze overnight). If you have young kids, these molds are especially cute. For one, they aren't too big. I have a set of pop molds that are nice, but quite large and sometimes I just want a little frozen treat, not a meal! Anyway, these are smaller (probably hold around 1/3 cup or so) and the pop mold stick has a little spaceman that gets inserted into the pop so when you get to the stick, voila...a little red space man is there to greet you. The handle of the pop stick is actually the "flame afterburner" like when it's taking off. They are just cute and fun. By the way, if you belong to Costco, they have these on sale now. I paid $13.99 for a double package (12 pops total) and they were on sale now for only $9.99.

I decided to keep these pops simple. I thought about pulling out my Vitamix and whipping up something different or unusual, but decided that most of us just want to keep things as simple as possible, particularly in the summer...so I kept it simple. I made Lemon Chia Frozen Yogurt Pops. I literally only used my 2-cup glass measuring cup as both the measuring cup and the "bowl" along with a rubber spatula to fold things in as well as measuring spoons and a zester to make the lemon zest. Not much to clean up afterward. Now, I still may whip up something special another time...but for now, keeping it simple just seemed right. Below are a few photos as well as my easy peasy recipe.

You will notice that the recipe lists "sweetener to taste" because it really varies so much depending on what type of sweetener you use and since this isn't a baked good where you need a specific type for bulk and texture, you can really use any sweetener. If you want to use a dry sweetener, I would recommend using powdered (like Swerve confectioners) instead of granular. Granular erythritol based sweeteners (such as Swerve, Truvia or plain erythritol) can sometimes feel a bit gritty textured when used in recipes that are chilled or frozen, so powdered works better if you want to keep it smooth and creamy textured. Granular sweeteners can be powdered by grinding in a small blender (just make sure to let the dust settle before opening your blender container).

I used stevia to sweeten this batch of frozen yogurt pops. Stevia is such a unique sweetener because it varies so much from brand to brand and between liquid and powdered versions. Some liquid versions are pure stevia, some have food grade glycerin added, and some have alcohol added. Powdered versions can be pure or have fillers added like dextrose (which is glucose/sugar), so it's important to read labels. Some stevia is blended with other sugar alcohols such as erythritol (like Truva, for example). I have lots of different brands and types of stevia; more than any human should have...LOL. I used NuStevia simple syrup this time, but you can use whatever you have available and whatever happens to be your personal favorite. A number of bloggers have rated stevia at one time or another and will tell you that "this one is best" based on their own personal taste tests...but truthfully (and unfortunately), it doesn't really work that way with stevia. What one person thinks is awesome, another person thinks is awful. Stevia is a very personal choice and there is a fine line between sweet and bitter if you use too much of any kind of stevia. There are certain types and brands that I prefer more than others, but none that I am totally over the moon about at this moment. Simply find one that you like or can tolerate and if you keep using it, you find that "sweet spot" of how much to use and you eventually get used to it. Now, like with most anything, there are always exceptions though. I've known folks that just plain do not like stevia of any kind or brand. If you happen to be one of those folks that no matter what kind of stevia you try, it tastes bitter, you may just be what is considered a "super taster" which is someone who has more taste buds than some of us do, and therefore are more sensitive to sweet, bitter, salty, etc. No worries though, because any type of sweetener will work for frozen yogurt; just use what you like best. I snapped a few photos and included the easy recipe below. Enjoy! 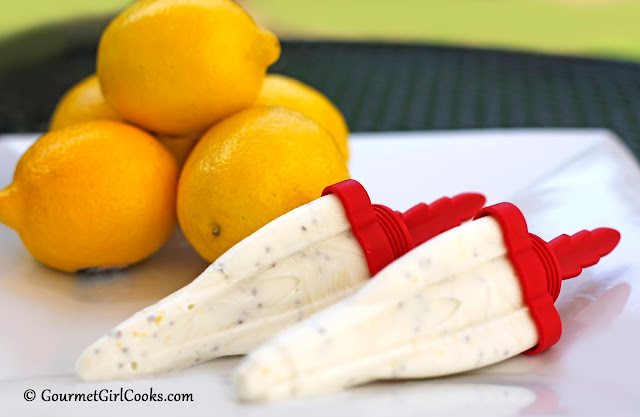 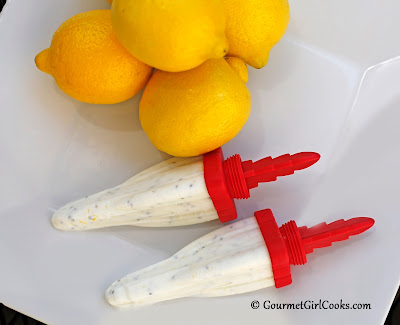 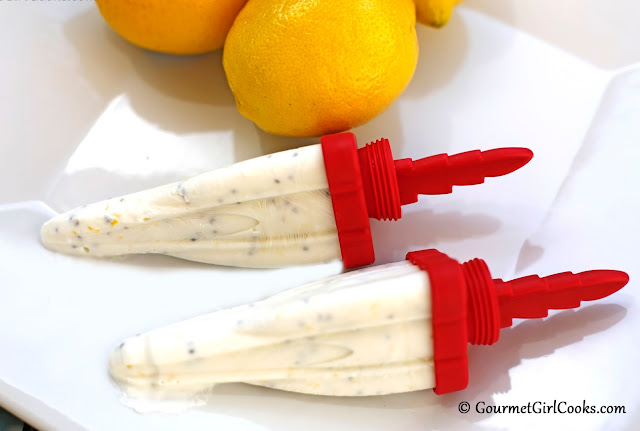 Blend all ingredients together until smooth. Add and adjust sweetner, to taste. Note that the level of sweetness tends to decrease when frozen, so slightly over sweeten and make them a little sweeter than you think they should be. Fill 6 pop molds and freeze until solid. Freeze any remaining excess yogurt in small dixie type cups for an extra little treat to scoop and eat. To remove from molds, simply run warm water from the sink over the outside of the molds until they just begin to loosen. Remove and enjoy!

*Note: If using narrow molds with intricate designs or grooves, a less messy way to fill molds is to scoop thick yogurt mixture into a large Ziploc type bag (or piping bag), cut the corner, squeeze and fill. Tap molds on counter or other flat surface several times to release any air bubbles or pockets so all cracks and crevices are filled. Leave about 1/4" space at top of molds so they don't overflow when inserting pop sticks.

You must be psychic, GGC! It's 90 here in central Ohio, too, and these pops seem perfect for a light summer treat. I bought Fage today, brought up a bag of chia from my freezer this afternoon, have some whipping cream I need to use up, and discovered a new bottle of lemon extract in my pantry. I think I'll whip them up right now. Do they taste as good as I'm thinking they will?

I really liked the one I had this afternoon. I will make them a wee bit sweeter next time (like I mentioned in my post, the sweetness level is less after freezing for some reason). I noticed that with other ice creams I've made in the past. I hope you enjoy them. Just make sure you mixture tastes good and then make it a little sweeter knowing it will reduce a bit when frozen. It was the perfect treat. Any that you have leftover after filling your molds can simply be frozen in other containers or just enjoyed "as is" (which is what I did). :-)

These look great. I was wondering what the chia adds to this recipe?

They are not required or necessary...they simply add a little crunch (and are supposed to be healthy, too). You know how everyone pairs lemon with poppyseed...this is just a healthy little twist on that. You can leave them out or if you want a little "bite" you can mix in unsweetened flaked coconut. :-)

I made the pops, but had to sub tangerine zest--my lemon looked past its "best by" date--lol. That was OK, tho, tangerine has an amazing flavor. I tasted before freezing and was not crazy about the pops. But when I had one the next day--wow, what a difference the freezing made! This will be a go-to recipe for sure!!!

Now I won't have to improvise with Dixie cups anymore! Kroger's had the other shape, too (more like a "regular" ice-cream-on-a-stick shape) but those are all attached at the base. The Flute Pops are separate, so it looked like they'd be more convenient.

We haven't quite reached your scorching temps yet, but the humidity has been brutal the last few days! Ugh! Looking for that to resolve *soon*! Friends of ours were in your area on vacation last week and I think they noticed the heat! :-)

Oh, how CUTE! Nice and colorful, too. I'm with you about purchasing pop molds that are separate from each other. I won't make THAT mistake again...LOL. I'm going to try making some popsicles with fresh fruit as well. We got to 95 today and then had pounding thunderstorms and hail late afternoon and evening. The news said the Atlanta area had over 2,000 lightning strikes in a 15-minute period at the height of the storm. At least your friends were here last week and not this week where it's about 10 degrees warmer! The forecast doesn't look promising for next week either - I heard it might get close to 100! Might have to make a batch of sandwich buns and resort to sandwiches if it gets like that.

Stay cool and just be glad you are where you are and not here! :-)