This evening I made mini Stuffed Eggplant Boats. For the filling, I used ingredients found in two of my favorite Greek/Middle Eastern dishes; Spanakopita and Moussaka. I had 4 beautiful small eggplants that I picked up at Costco this past weekend. I halved them, brushed them with olive oil, seasoned with a pinch of salt and roasted them until tender and then scooped out the pulp and set it aside.

I kept the filling easy and fresh. I browned ground beef, onions and garlic and then added fresh baby spinach, fresh tomatoes, crumbled feta and the roasted eggplant flesh I scooped out of the eggplant shells. I seasoned it with salt, pepper and a touch of cinnamon. I filled the little boats with the meat and veggie mixture and nestled them in a baking dish and then topped each boat with my "grain free bechamel sauce", then popped them in the oven to bake. They turned out delicious...sort of a blend between Moussaka (because of the eggplant, beef, tomato and bechamel) and Spanakopita (because of the spinach and feta). I love eggplant and love stuffing them with other things that I like, too. Hubby and I both enjoyed them. If there are any ingredients that you don't like, just omit them or swap them out...like use cheddar cheese instead of feta, etc. I snapped a few photos below (as well as a couple more from my visit to Cordova). Enjoy! 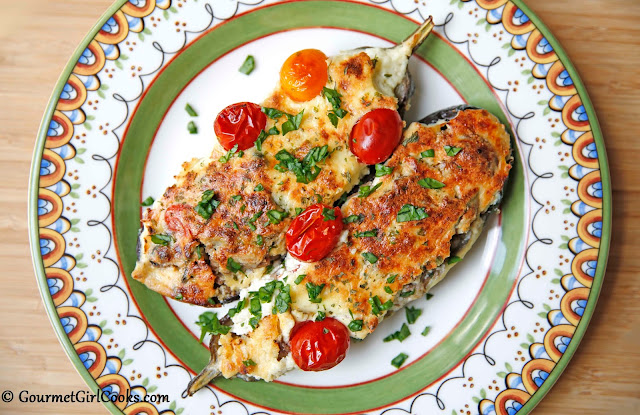 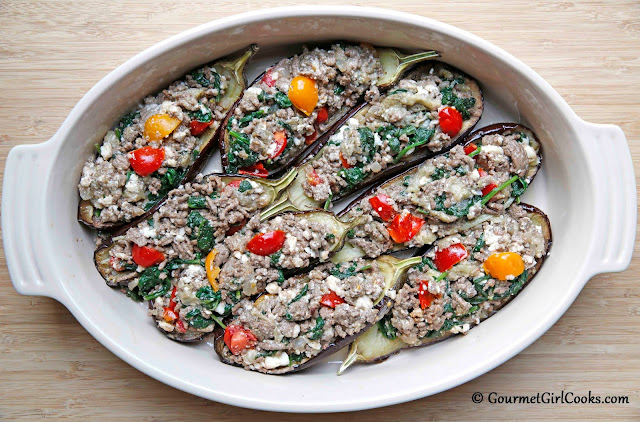 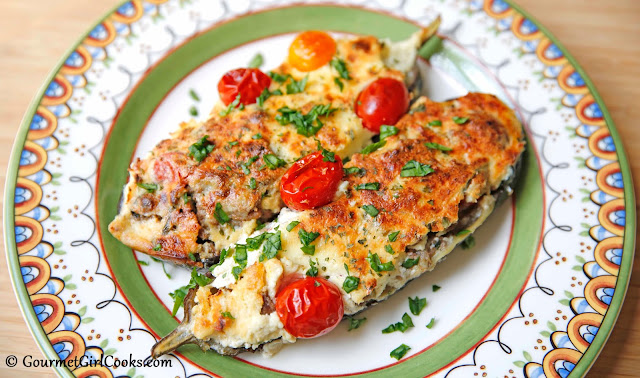 Preheat oven to 400 degrees F. Lightly brush bottom of a 9" x 13” baking dish or similar sized casserole dish with olive oil and set aside. Place halved eggplants on a baking sheet, cut side up; brush cut side with olive oil and season with salt to taste. Roast for 20 minutes or until flesh is fork tender. Let cool for a few minutes until cool enough to handle. Using a spoon, scoop out eggplant flesh, leaving a thin wall of flesh against the eggplant's skin so they maintain their shape and can be stuffed. Chop the eggplant flesh and set aside (it will be added to the cooked meat mixture later). Reduce oven temperature to 350 degrees F.

While the eggplants are baking, brown beef in a large skillet; add onions and cook until beef is no longer pink and onions are soft and translucent; add garlic and cook a few minutes more. Turn heat up to medium-high and cook off any juices that have accumulated in pan; add fresh spinach to beef mixture and cook just until wilted. Add tomatoes and cook a couple of minutes. Remove pan from heat. Stir in cinnamon and season with salt and pepper, to taste.

To prepare bechamel sauce, whisk ricotta, eggs, 1/2 cup Parmesan cheese and dash of nutmeg together in a medium bowl until smooth; season with salt and pepper, to taste (Parmesan cheese is salty, so be careful not to over salt).

Stir the feta cheese and chopped eggplant flesh into cooled meat mixture. Using a large spoon, divide the filling evenly between the eggplant shells and fill until slightly mounded. Place filled shells in prepared baking dish, nestling close together. Spoon bechamel sauce on top of each eggplant half; lightly spread to cover meat filling. If desired, top with additional Parmesan cheese. Bake at 350 degrees F for 35 to 40 minutes. If desired, run under the broiler for a few minutes until golden brown. Let sit about 10 minutes before serving.

I love eggplant, but my husband isn't a fan. But I'll give this recipe a try, maybe because it's "hidden" hopefully he'll like it.

I know the feeling. My husband doesn't hate it but isn't a big fan either which is why I try to stick to the smaller more tender and less "seedy" smaller eggplant when possible. That seems to help! :-)

Hi......I love eggplant and want to try this.....except I'm not a big fan of feta cheese. Do you think goat cheese might work instead? Thanks in advance for your help.

This looks GREAT! I'm not sure where to get the little eggplants in my area, though. I'll check at the farmer's market tomorrow and see if I can find some. Are they purple on the outside or white? From the pictures, it looks like they're purple.

Thank you. They are purple on the outside. Some places refer to them as "Italian eggplant". I find them frequently at my Costco but have seen them other places, too. Occasionally they are purple with some white streaks. Hope you find them. :-)