This evening I made a Greek Style Spinach-Feta Pie for dinner.  The crust was made with almond flour.  The filling was rich and tasty and chocked full of spinach, feta, seasonings, eggs and a little half-n-half.  It was absolutely delicious.  It is probably one of my favorite wheat/gluten free recipes so far.  I poured over numerous quiche recipes and just didn't find exactly what I was looking for, so I put one together myself.  It reminds me of the flavors of Greek Spanikopita (only richer because this one has eggs in it and almond crust instead of flaky phyllo pastry crust).  I snapped several photos of the preparation and finished product as well as the recipe for you to see below.  Enjoy! 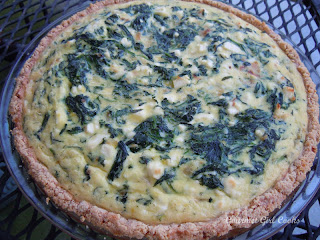 Preheat oven to 325 degrees F.  Place all crust ingredients in a medium bowl.  Cut butter and egg into flour with a pastry cutter until mixture resembles small pebbles and the flour is thoroughly moistened (the same way you prepare a pie crust).  Press crust mixture into pie dish or tart pan (I used a 10" pyrex pie dish).  Bake for approximately 15 minutes or until lightly browned; remove from oven and set aside.

Increase oven temp to 350 F degrees.  In a non-stick skillet, saute onions and garlic in olive oil until translucent; remove and set aside.  In the same skillet, saute spinach just until wilted.  Drain and press as much of the liquid out of the spinach as possible (I use a mesh strainer and press it with the back of a spoon).  Place well drained spinach in a medium bowl; add cooked onions and garlic, feta, dill, lemon peel, pepper, eggs and half-n-half.  Mix until well combined.  Pour mixture into the lightly baked crust and bake at 350 F for 15 minutes; lower oven temp to 325 F (so edge of crust doesn't over brown); bake for an additional 15-20 minutes or until filling and eggs are set and cooked .  If center still seems a little jiggly, cook an additional few minutes.

This was fantastic! I'm making it for the second time tomorrow for dinner. Served it with a Greek Salad. This will be our weekly meatless dish; so delish! Thanks for the recipe.

Can you sub margarine for the butter?

Hi Ali -- yes, you can substitute margarine for the butter (if you follow Wheat Belly though, butter is preferred over margarine). The recipe will work as well though with margarine.