This morning I decided to try the almond version of the new Paleo Bread (by Julian Bakery) that I purchased recently.  Last weekend I tried their coconut flour version and posted my review for it (basically stating that it was okay...no cartwheels or anything).  I found the almond version, in addition to being darker in color than the coconut version, to be a bit more dense.  I had one slice of the almond bread toasted and buttered alongside my omelet (that was filled w/ red bell peppers, onions, finely diced Applegate chicken apple sausage, and Dubliner cheese).  At "first bite"....it was "alright".  Again, not much in the way of flavor -- almost as if it might have needed a little pinch of salt or something.  I continued eating it, alternating a bite of omelet with a bite of toast...and I found it a suitable substitution for toast to serve alongside a flavorful omelet.  Again, this one didn't win any flavor awards or make you want to do any cartwheels and scream 'yippeeeeee"...but it was acceptable.  It is quite filling because of the density and would be great on those mornings where you want a heartier breakfast.  At some point in the future, I will sample these breads toasted and topped with some peanut butter (seems like they would make a good base to hold something like that).  I also want to try using them to make French toast as well.  So, if you are looking for the exact taste and texture of regular bread, you might be disappointed.  If you are looking for something that would give you the ability to enjoy toast or a grilled sandwich or panini, or simply just something to spread your peanut or almond butter on...then you just might find this bread worthy of at least a cartwheel or two!  :-)  Enjoy! 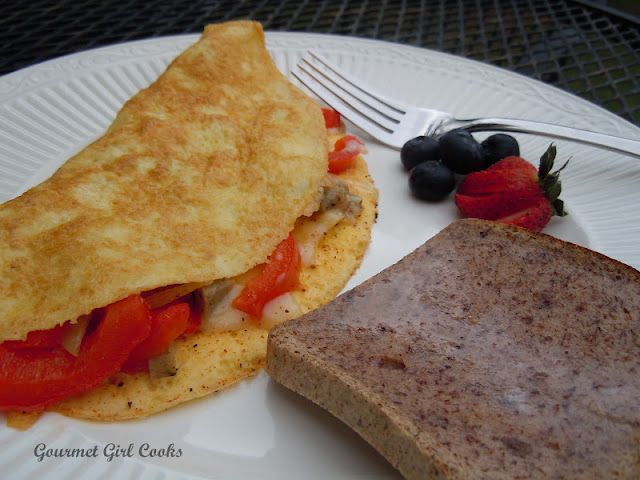 Posted by Gourmet Girl Cooks at 10:00 AM

Thanks for reviewing this. I have been curious to know how it is, but I can't order it due to where I live. Given the ingredients, it's probably very similar to the almond flour bread I make at home anyway.

I agree Anna. The fact that it cost $9.99 per loaf in my health food store makes me think, based on my taste test...that I could probably make just as good, if not better than this one. But I do understand that everyone doesn't like to bake -- so for those folks it might be worth it.