This evening we ate the leftover brisket meal from Sunday night.  It was just as good reheated.  However, even though I "halved" the crushed tomatoes in the recipe I used as a guide (found in Gourmet Magazine)...I think they need to be reduced further next time.  It was delicious, don't get me wrong...but just more tomato flavor than I personally like with a brisket.  Next time I will use a 14-oz can for 8 pounds of meat, or reduce it accordingly to the size of roast I make.  Since I didn't have to cook dinner tonight, I decided to finally try making "chia pudding" that is supposed to be very similar to tapioca pudding.  Tapioca pudding is by far my absolute favorite kind of pudding...but of course, tapioca is a starch.  I decided to give these little chia seeds a try to see if they really do resemble tapioca as reported.

I still had leftover pumpkin puree in the fridge from the Chocolate Pumpkin Brownies I made over the weekend...so I decided to make "Pumpkin Pie Chia Pudding".  I put all the same spices in it that go into a pumpkin pie -- cinnamon, ginger, cloves, nutmeg and a splash of vanilla.  I used mostly unsweetened almond milk for the liquid and a little half-n-half to give it a little richness and creaminess.  I used liquid stevia to sweeten it and added the chia seeds in last so I could taste the pudding mixture until it had the right amount of spices and sweetness.  I used Nutiva's Organic White Chia Seeds (instead of the black chia seeds)...after all, who ever ate black tapioca before???  I like the fact that you just whisk your ingredients together and let it do its thing in the fridge -- the chia seeds expand and quadruple as they swell in the liquid, thus resembling tapioca.  The chia seeds are packed with Omega 3, protein, antioxidants and fiber.  They have no sugar and the 5 grams of fiber cancel out the 5 grams of carbohydrate making them "0" net carbs.  Sounds amazing if in fact it really ends up being like tapioca!  You are supposed to refrigerate them for 2 or 3 hours to allow them to "gel and swell".  I want them to just hurry up -- I found myself constantly wanting to peek in the fridge to see if I could actually SEE them puff up.  Now, if I wake up tomorrow and have chia plants growing out of the top of my head while I sing "Cha Cha Cha Chia"...then you'll know that this wasn't a good thing.  :-)

I finally got to try the pudding around 11:00 tonight.  It really does look exactly like tapioca pudding -- no question about that.  For the most part the texture is similar, although I still detect a tiny bit of crunch from some seeds that aren't thoroughly done swelling.  I topped it with some chopped walnuts that helped mask the crunch somewhat.  As of tonight, I rate this a 6.5 out of 10.  I will re-rate again tomorrow after it has sat overnight in the fridge -- and I'm hoping the tiny bit of crunch will be gone (as of this post, the jury is still out...to be continued tomorrow).  Flavor wise, it's good -- I purposely did not make it real sweet knowing that I could easily squeeze a drop or two more stevia into the pudding, if needed, while eating it.  Below is the recipe as well as a couple of photos.  Enjoy! 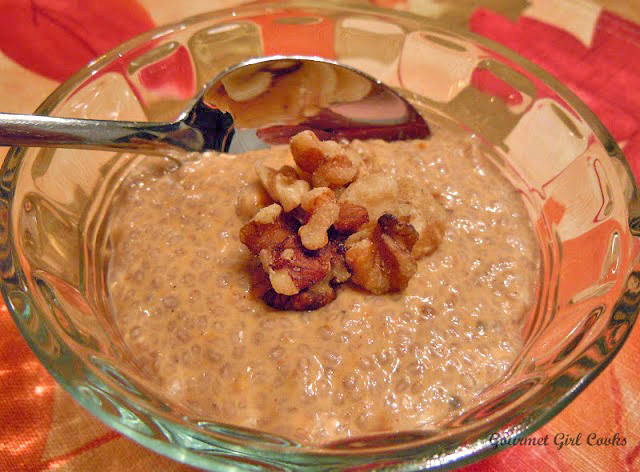 Blend all ingredients together (except stevia and chia seeds) in a bowl or large glass measuring cup (I used a 4-cup glass measuring cup), whisking until smooth.  Add stevia or Swerve to desired sweetness, tasting until it is to your liking.  The liquid stevia I used was a little less than 1/2 teaspoon.  Stevia brands and types vary so much that you really need to adjust it for the specific type and brand you use as well as the level of sweetness you prefer.  Once you have it taste the way you like, whisk in the chia seeds; cover and refrigerate for a couple of hours.  This makes approximately four 1/2 cup servings.