This evening I was in the mood for something different -- something "fast food-like". Not just fast as in quick to make, but something reminiscent of what we used to eat at Chick-fil-a. I never really ate a lot of fast food before going wheat free, but occasionally, we liked to go on a weekend morning for a Chick-fil-a chicken biscuit for breakfast. This evening I made my Sweet & Spicy Peanut Dusted Chicken using chicken cutlets. Since I was putting the chicken on biscuits to make little sandwiches, I cut the chicken cutlets before cooking them so they would fit on the biscuits. I placed a couple small pieces of the lightly browned dusted chicken cutlets on each biscuit and topped them with sliced Muenster cheese. I made roasted brussels sprouts to go with our meal and dusted them with chipotle chile powder and sea salt to give them a little spicy kick. I snapped a few photos below as well as the recipe for the Sweet & Spicy Peanut Dusted Chicken. The recipe for the biscuits is in this link: Easy Cheddar Black Pepper Biscuits. Enjoy! 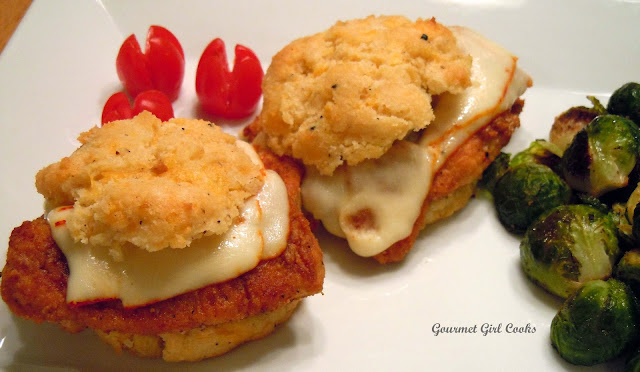 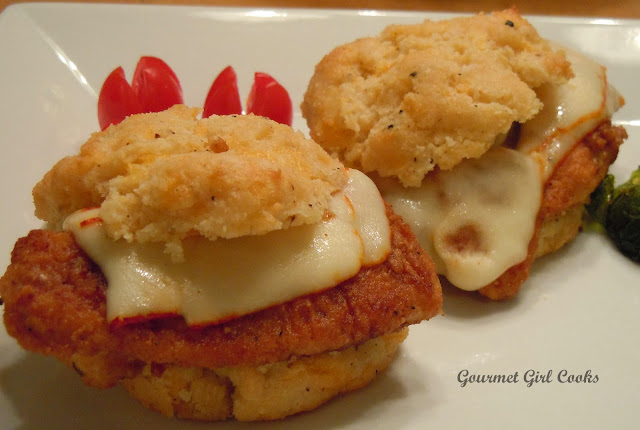 For the egg wash:
1 large egg, beaten
2 tablespoons cream or milk
Salt and pepper, to taste
Dash of cayenne pepper

Where do you get chicken cutlets? Do you pound them flat yourself?

Hi DrLFRoberts -- Usually I buy them in the store that way -- do they sell Perdue chicken where you live? They always have Perdue cutlets in my stores. The local store brands frequently carry cutlets, too. If not, I make them myself. If you are making them for these small biscuit sandwiches, you can cut them on a slant (diagonally) into medallion type pieces before breading and cooking. I cut them about 1/4" thick (I actually cut these myself this evening). If you want, you can pound them even thinner after cutting with a meat mallet, but it isn't necessary. Hope that helps! :-)

Oh, thanks! I think those chicken biscuits are yummy

Thanks, DrLFRoberts! I hope you enjoy them. :-)

Wow, those look and sound yummy. I don't think I've ever heard of using peanut flour, or even seen peanut flour before. Is there an advantage over almond flour for frying and breading? We love every recipe of yours that we make. Thank you.

Hi Anonymous -- thanks for the kind comments! Is there an advantage of using peanut flour over almond flour for breading you asked? Well, they are completely different. Peanut flour is along the lines in consistency of cornstarch -- extremely fine (like talc). It is better for dusting where you don't want a crust per se, but more of a coating. You can taste peanut flour more than almond flour which is mild. I am going to experiment more with peanut flour -- I am going to use it in a dish where I normally used cornstarch, but where a peanut flavor is okay, even desirable and see how it turns out. Thanks, again! :-)

I made this tonight, and it was the first time for your biscuits. All I can say is you are a genius! The peanut flour really made the chicken taste like great Southern style to me. This is a winner that I will make again and again!

Hi Kathleen! I'm so glad you enjoyed the biscuits -- I have made a number of different biscuit styles/recipes over the past 1-1/2 yrs and this one is my favorite, by far. Glad you enjoyed the peanut flour dusting on the chicken, too! It gives it a completely different finish than using almond flour or flax does. I'm glad you tried the biscuits and hope you enjoy using them! Thanks for the kind comments, too! :-)

OH MY GOD YOU ARE A GOFDESS