This evening I wanted to make a fairly quick and simple dinner. It was a bright, sunny and cold day here in the Atlanta area and a rare snowy morning. The Atlanta area was socked with a storm yesterday and last night that brought sleet, ice and a few inches of snow. Unfortunately, it also brought treacherous road conditions with it since we are not prepared for winter weather and most of us don't get the opportunity to ever really learn how to drive in it either. There were people stranded along the roads trying to get home from work, school, etc. and there were some that were stuck in their cars for up to 24 hours. It has been a frightening and stressful time for so many Atlantans and their families -- because families got trapped apart from each other rather than trapped at home together. Parents were separated from their kids, many kids got stuck having to sleep at school overnight, people were stuck in their cars on slippery interstates unable to move, hundreds of accidents, people running out of gas after sitting for 16+ hours and many forced to abandon their vehicles and walk for help or shelter in 11 and 12 degrees temps last night. The timing of the storm couldn't be worse because it happened while people were at work and kids in school all were desperately trying to get home to each other and to safety. About 1,000 kids had to spend the night at school and there were so many folks unable to get home and people that were forced to give up and abandon their vehicles and walk for miles to get home or to shelter. I have never seen anything like what we experienced here. While I have seen more snow n my lifetime, I have never a bigger mess than what we just endured. I am glad that it is now behind us.

Dinner tonight was simple -- lightly steamed brussels sprouts (trimmed and halved) sauteed in butter tossed with sliced Aidell's Smoked Chicken & Apple Sausages and thinly sliced onion. It was easy and delicious and a great combination of flavors. I snapped a few photos below. Enjoy! 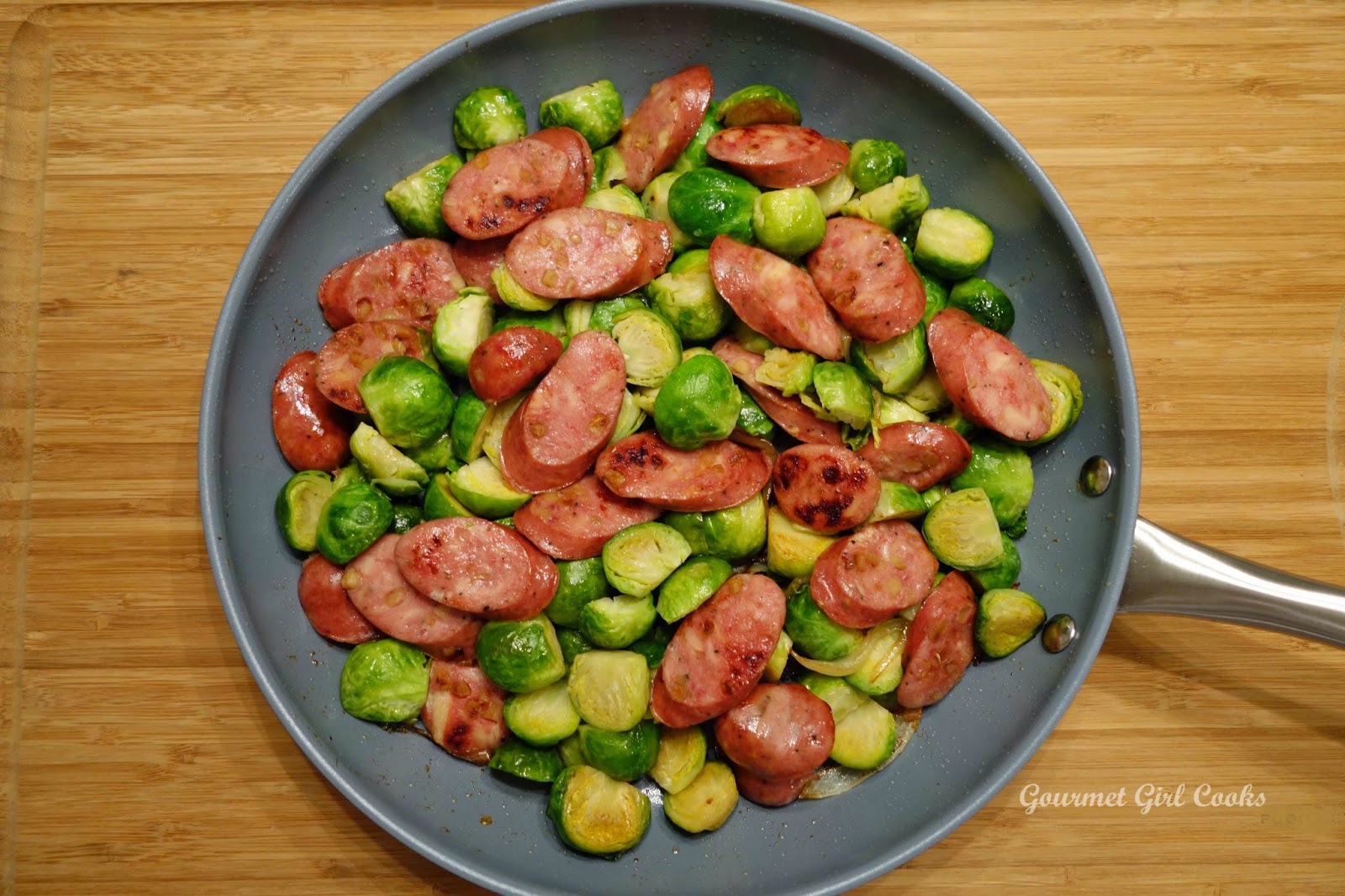 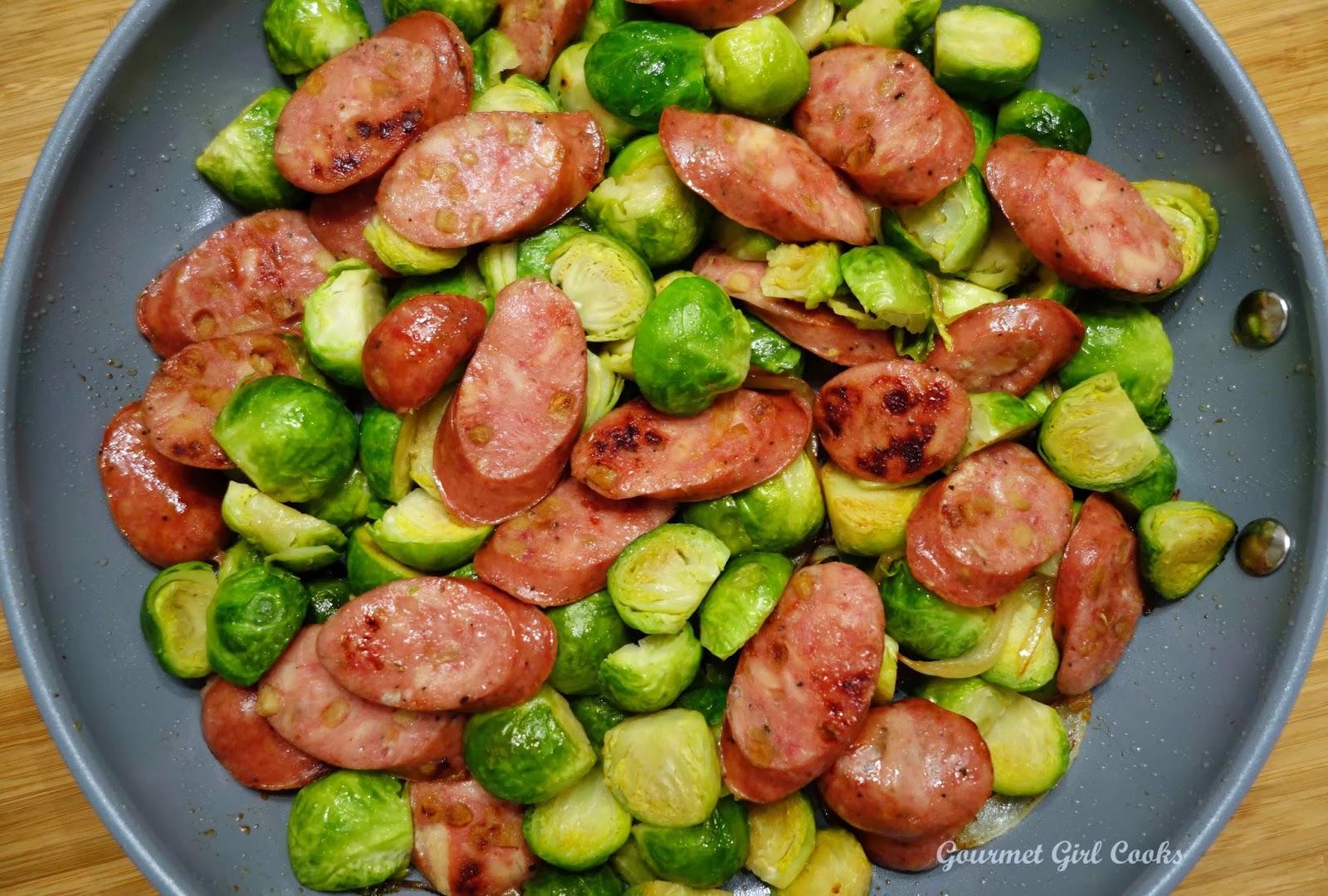 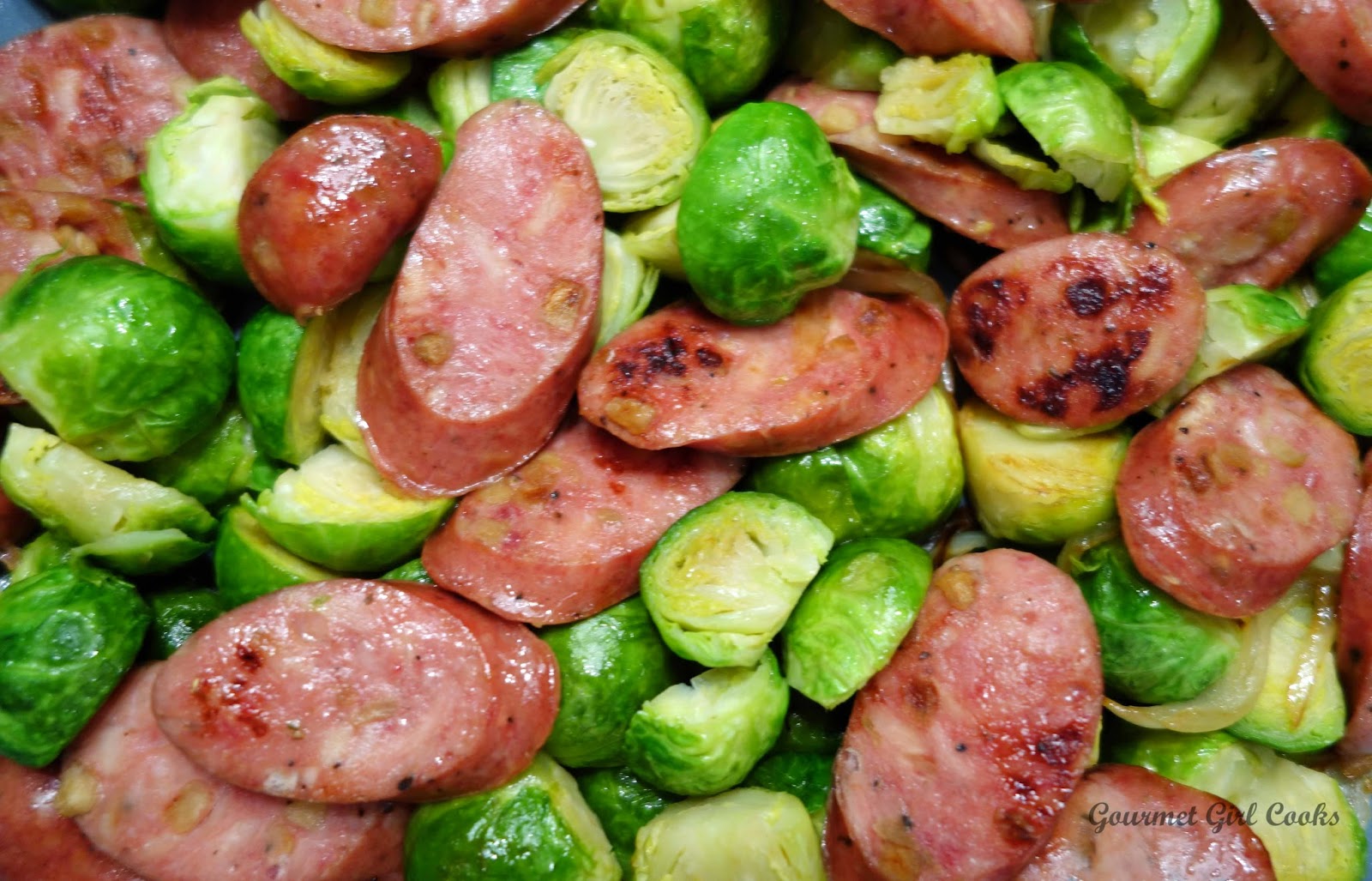 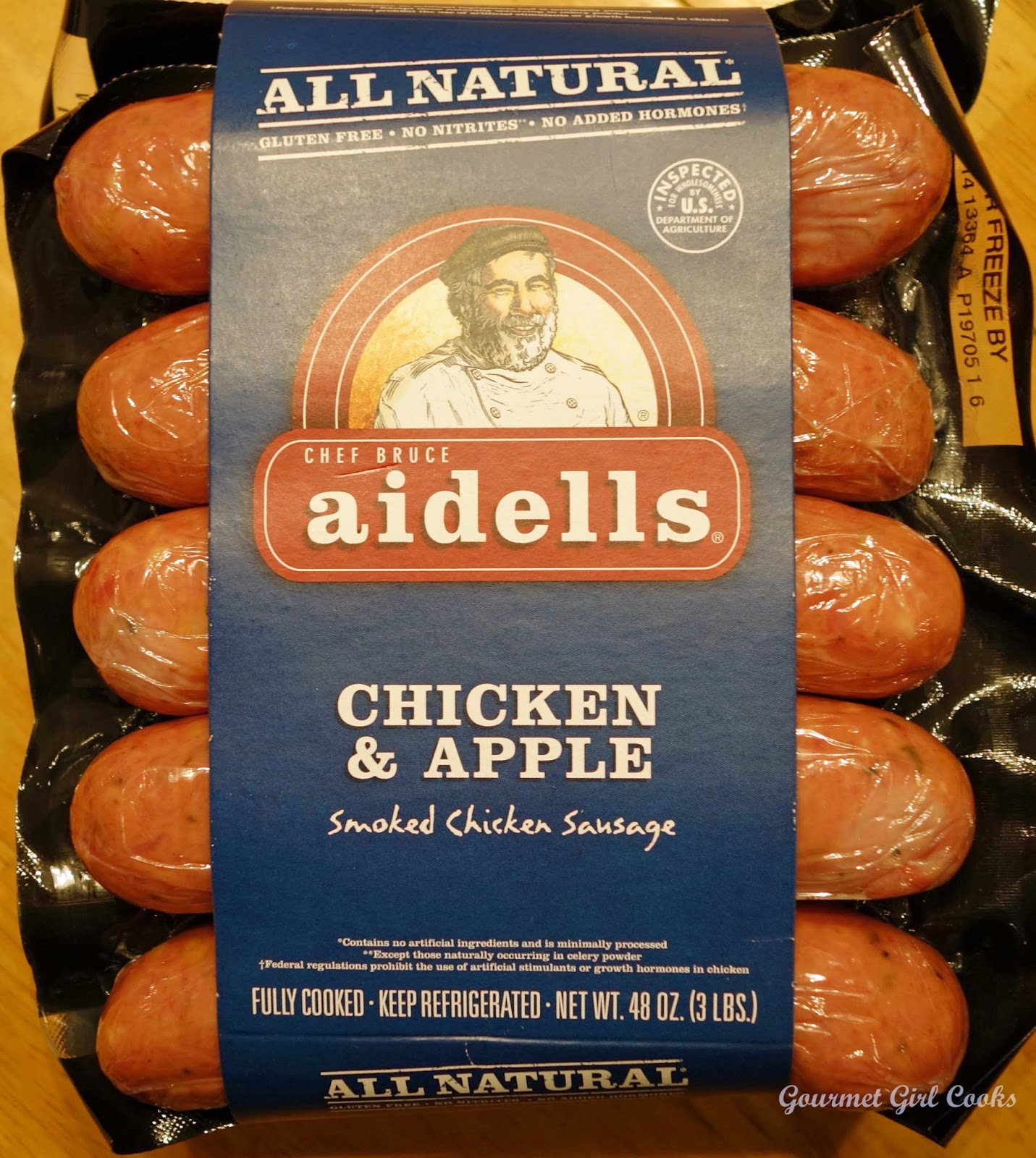 GG, I am glad that you stayed home, I suppose you really had no choice! Thank God for phones, at least families could communicate. I hope that the stress did not kill some people!
Walking in snow(when deep) is quite a feat, especially when one is overweight, as so many people are these days.
Let us hope that the worst is over!
Be warm and safe! Bis bald Barbara.
P>S> I just bought the same sausage at Costco! I appreciate that it has no Nitrate!
I was thinking that the bloggers in Atlanta only have to hang out at Costco to meet you, since you visit there like clockwork. LOL.
That is what I would do!!!!

Thanks, Barbara! It was pretty ugly here. Too funny about meeting me at Costco. Maybe I should start a "Saturday Shopping at Costco with GG" LOL Nobody likes shopping with me -- I look at everything and am super picky! Bis bald ;-)

We would be 2 peas in a pod! I go through every isle and take a long time to get out of there. I shop alone also-I thing it is the best way-no pressure!
I heard that the cold spell is over in Georgia.
One of my favourite movies is *Steel Magnolia*, is that depicting Georgia?

Did you go back to work today?

If so I hope that you reached your destination safely!
Bis bald ! Barbara.

I thought of you when I heard about that horrible storm in Atlanta! OMGoodness that was just awful; been watching it on the news a lot.
Glad your okay! My local Costco got the AMYLU andouille sausages in again! I'm so happy - they are my favorite. Take care.

TV "news" continues to show video of the mess in Atlanta. It's incomprehensible and I'm sure the pix only give us a tiny idea of how it was. Hopefully things are getting back to normal. Tomorrow we're getting more snow ... actually it's beginning right now. Before the end of the month we will definitely break the record for the snowiest winter *ever*! Already in January we've surpassed the average snowfall for the entire winter! I'd gladly give it all to Calif, who needs it desperately! I think we're all ready for spring, but right now it seems a long way off.

You cooked up some beautiful "comfort food" for your dinner. Just what the doctor ordered, I'd say! Stay safe and warm.

GG I'm so glad you are safe and warm. I know that you folks in Atlanta are not ready to deal with this type of weather. I'm in Colorado so we are more able to cope with the cold, snowy and slippery conditions (not that I like any of it!). Hopefully all families have been reunited and are also safely at home.

Gosh I wish we had a Costco (the nearest one is about 60 miles away--not cost-effective).

Anyway thanks for all you do and keep those recipes coming.

Thanks so much, Peg! Today should be the final thaw -- supposed to get up into the 50s and the 60's tomorrow?? How is that for some crazy weather, all within the same week! No, even I wouldn't drive 60 miles for Costco! Thanks for the kind comments! I will keep the recipes coming! :-)

Thanks, CyberSis -- It has been an interesting winter so far -- and with the temps in the 60s this weekend, it just makes our extreme temps go in the opposite direction! Now, as long as that doesn't spawn tornadoes, I guess it's better than the ice and freezing temps of earlier this week. Hope you stay safe and warm, too. Sounds like you have already had your fill of snow. :-)

Hi Patricia. Thanks! Oh goody -- I will look for the Amylu sausages this weekend when I go to Costco. I like them a lot, too! Thanks for your concern! :-)

Hi Barbara! Yes, I am back to work. I love to go up and down every aisle, too -- I consider it my "power shopping" -- like power walking! I will have to pay closer attention to the scenes on Steel Magnolias to tell you how accurate it is. Georgia varies so much depending on what part you are in. I love that movie, too! Take care... Bis bald :-)