It's a cold, dark and damp rainy day here today. I typically don't eat lunch on weekends since we sleep in a bit and have a more substantial late breakfast/brunch than we do during the week. However, this afternoon I was in the mood for something rich, warm and chocolatey. A little over a month ago, before I got sick, I picked up a carton of Silk's new unsweetened cashew milk and thought it might be nice to make hot chocolate with. It has 25 calories per cup, 1 gram of carbs and no sugar. Well, it had gotten pushed to the back of my fridge and I really hadn't thought much about it since. This morning I noticed it had a "use by date" of 3/9/15...so I decided this afternoon would be a good time to give it a whirl.

I started out with the idea of making hot chocolate and decided I didn't want to fool around with incorporating dry cocoa powder into the cashew milk. While it's possible to do, it can be such a pain getting dry cocoa powder blended smoothly into liquid and I was looking for rich, thick, creamy smooth decadence in a mug! LOL So, I decided to chop some of my organic Endangered Species 88% cacao dark chocolate bar up and melt and whisk it into the hot cashew milk I had heated up. Well, it could have been so simple but I couldn't help but make it SUPER special! I made 2 servings...one for me and one for hubby, so I used 2 cups of the cashew milk and heated it up on the stove until it just began to simmer and then cut the heat and then whisked in confectioners style Swerve, a little vanilla extract, a pinch of pink Himalayan sea salt and then the chopped dark chocolate. I whisked vigorously to get it a little frothy...and then the little switch went off in my head. I wanted it to be RICH...THICK...CREAMY and chocolatey. I remembered how nicely cashew butter thickened my stir-fry sauces (instead of the cornstarch I used to use). I was already using cashew milk...so, why not give it a try. I stirred in some cashew butter and whisked until it began thickening...and then the next little switch went off in my head...why not pull out my little stick blender and make it super thick and FROTHY! I whizzed away and before my eyes, my simple little pot of hot chocolate morphed into a decadent hot chocolate MILKSHAKE!!! It was amazing...it was filling...it was decadent...and it provided us with the "got milk" mustache...only ours was CHOCOLATE!  Make it...shake it...you don't have to bake it. Recipe and photos below. Enjoy! 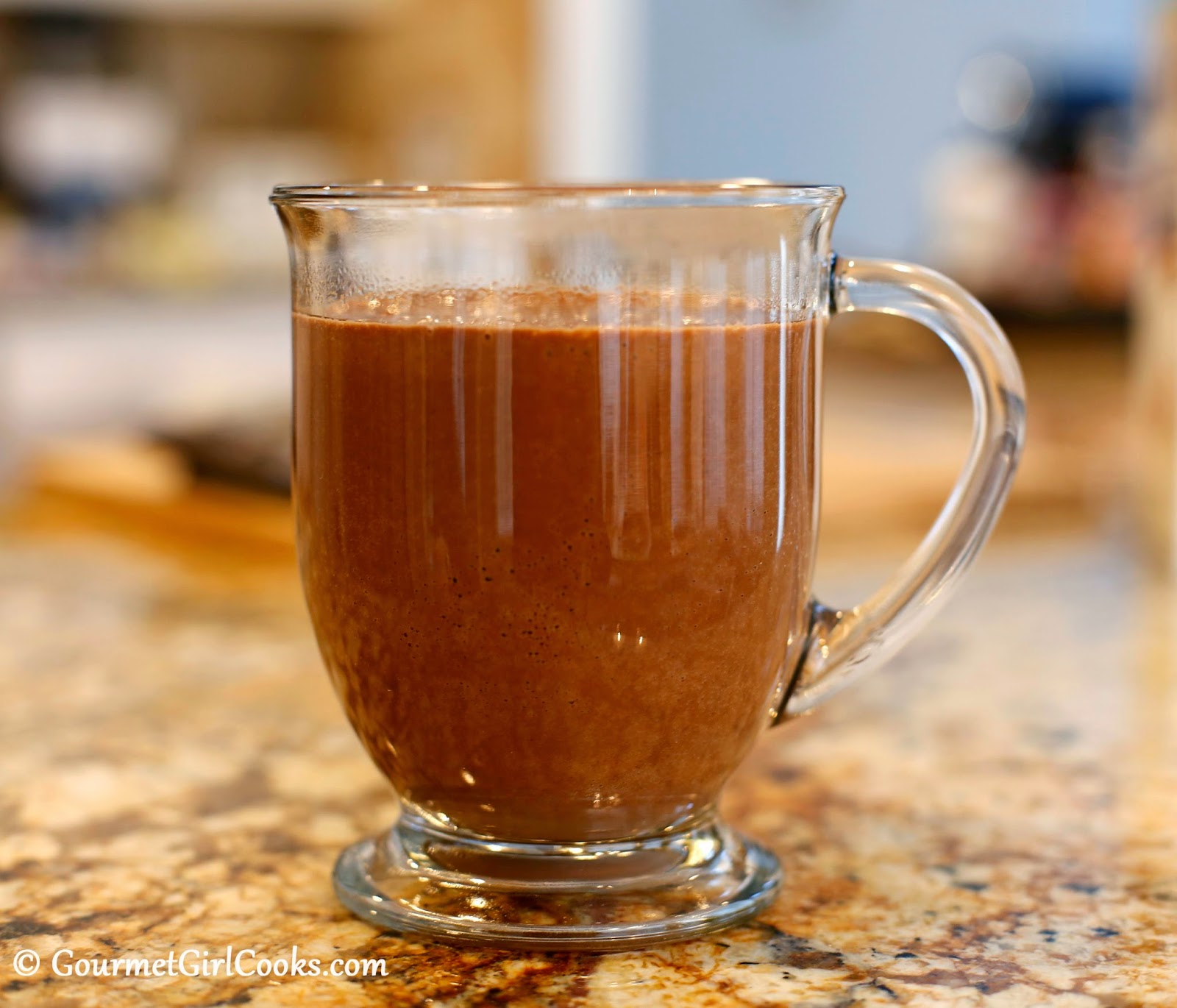 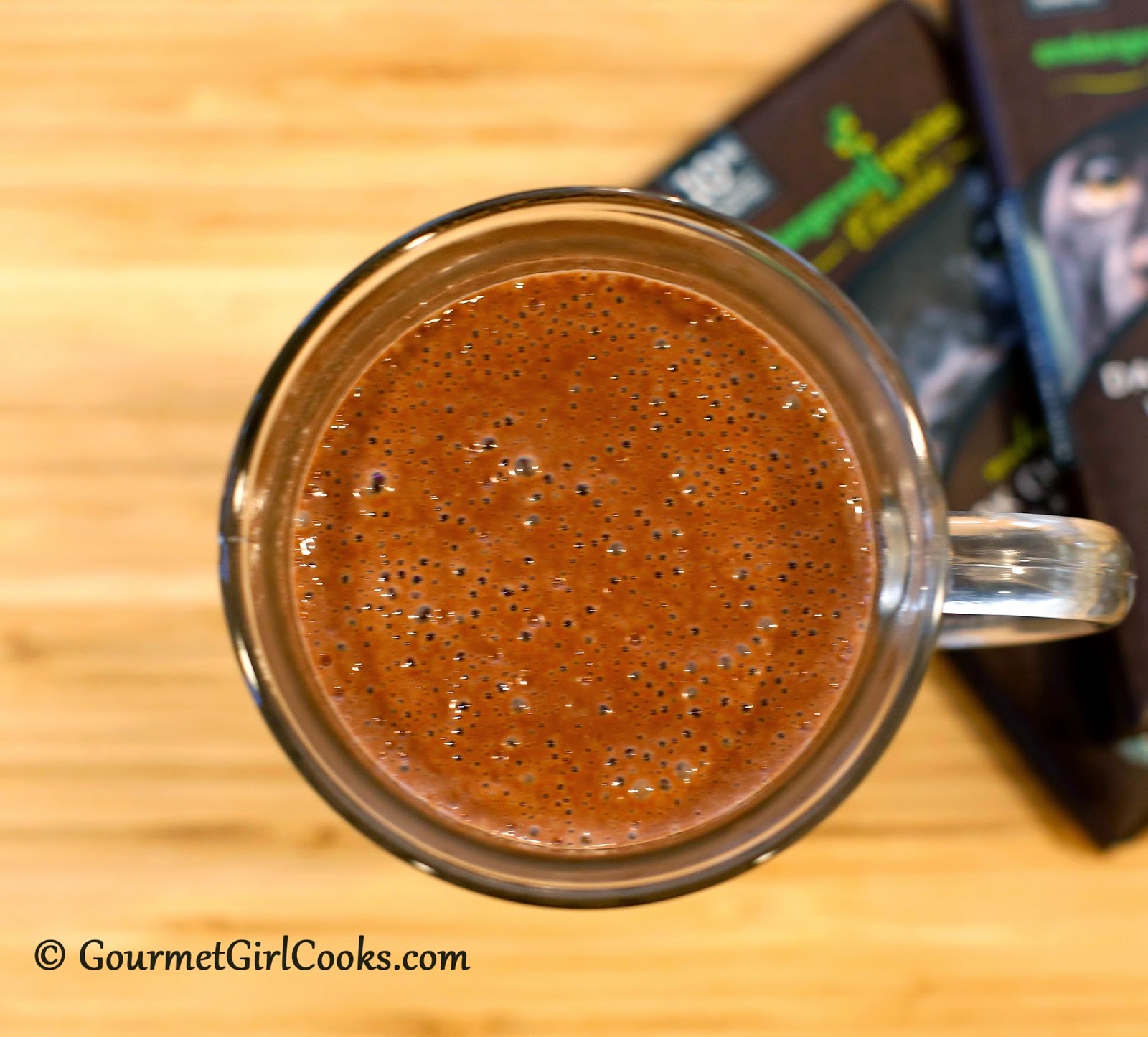 Heat cashew milk in a saucepan over medium high heat until hot. Remove from heat. Whisk in sweetener, vanilla and salt. Add chocolate and whisk until melted and blended in. Add cashew butter and stir until melted in and thickened. If desired, blend with a stick blender until frothy and thick. Serve piping hot in mugs.

Wow ... this looks and sounds so wonderful ... Cocoa with an Attitude! I haven't had hot cocoa for at least a year, and the other day I really wanted some. Last time I made it with almond milk and was underwhelmed. I didn't feel like buying a whole 1/2 gallon of full-fat milk just for a couple of cups of cocoa, so I decided to go ahead with almond milk and see if I could tweak it. I even cooked it on the stove and everything. Same result ... underwhelming. Now that I see your recipe, I think the chopped chocolate and the cashew butter would improve it substantially!

I *love* cashew milk and think it would make perfect cocoa. I saw it in the store for the first time recently (So Delicious brand) but didn't get any because I want to avoid carageenan ... although having it once in a while probably isn't going to do anyone in. ;-) Every now and then I'd look at the "milk" labels at the store to see if by some miracle they'd gotten rid of it. Lo & behold, I discovered recently that So Delicious coconut milk, which I used to *really* love, is now carageenan-free, as is their almond milk. Now, if they'd only do that to the cashew milk! Cashew milk is so easy to make. It's not gritty like homemade almond milk is, so you don't even have to strain it. It's just getting around to putting the cashews and the water into the Magic Bullet and turning it on ... that's the hard part! :-) For the present time I'm excited that my new old-favorite coconut milk is back (maybe it'll even make decent cocoa.)

BTW, Kroger's "Simple Truth" unsweetened almond milk is non-carageenan and it's very good by itself ... it just doesn't do much for my taste buds in cocoa. :-)

Hope you are on the mend!

I've never tried making nut milk before. I was actually surprised at how dark 1-1/2 ounces of chocolate made 2 cups of cashew milk. I think I could have gotten away with less and had it be plenty enough "chocolatey"...but the added cashew butter gives it that little extra rich body so it isn't thin.

I will have to check the labels again for the carageenan. I didn't realize they had removed it and will look at the carton of So Delicious cashew milk in my pantry to see if it is in there. I'd like to try the cashew milk chilled with maybe a faint hint of stevia/sweetness to see how it is like that. I am feeling better each day and keeping my fingers crossed that it continues. :-)

I recently made hot chocolate with Almond Milk for the first time. WOW! Nut milks add a great taste dimension to the hot chocolate. I didn't think of adding almond butter to it. Now I am thinking maybe a bit of peanut butter -with the chocolate would make a lovely taste treat.

This recipe is delicious. After seeing the recipe posted, I knew I'd have to try it. My husband liked it as well. It is a keeper.

Thank you for such a great recipe!

I wasn't hungry for dinner tonight, but it is so record- breakingly cold that wanted warmth and comfort and I had read your recioe earlier in the day, so I made your recioe up with a few changes.

I couldn't find Cashew Milk, so I used Silk Almond Milk unsweetened. I use Stevia as sweetener, and instead of a chocolate bar added used dark cocoa, which whisked in beautifully. I suppose it was about a tablespoon's worth

Your version sounds great, too! There's just something so comforting about hot chocolate isn't there! :-)

I just found Silk unsweetened cashew milk at our local Meijer's. It contains no carageenan so I picked up a container to try. It'll have to wait till tomorrow, though, because the "bone support" supplement that I take at night isn't supposed to be taken within a couple of hours of calcium (which is added to the milk.)

I would have preferred the smaller size of So Delicious, rather than the 1/2 gallon of Silk, but SD still has carageenan. It looks like it's disappearing from more and more brands, though, so maybe one of these days ... and as I mentioned in an earlier comment, SD has already removed it from most of their other products. That's progress, I guess. :-)

Glad you were able to find it. I, too, wish that they would sell it in 1-quart containers opposed to the 1/2 gallon cartons.

Like you said though, at least they are making progress and removing the carageenan from more and more of their products. It becomes harder for companies not to respond and change when their customers are increasingly more informed and aware of the health impact of ingredients they add to their products. Hope you enjoy it!:-)