This morning I actually slept in until after 10:00. I can't even remember the last time that happened, but it has been years for sure. I wanted to make a hearty brunch that would hold me until dinnertime. I had a plateful of my Sesame Seed Sandwich Buns on the counter staring me in the face. I thought about reheating a burger from last night's dinner but I was feeling more breakfast mode than burger mode. Then the idea crossed my mind; a Hash Brown Omelet Breakfast Sandwich...caramelized red bell peppers, Vidalia onions, eggs, bacon, and cheese on a lightly toasted bun. While I could have easily cooked and stacked those items together, I knew they'd be sliding all over the place, falling out of my bun as I ate it and this morning, I just wasn't in the mood for sloppy.

I thinly sliced about 1/4 of a red bell pepper and a small wedge of Vidalia onion and sauteed them in a tablespoon or so of olive oil in my 10-inch nonstick skillet. I cooked them over medium-high heat to soften and then begin caramelizing. After a few minutes, I added 2 strips of diced bacon to the peppers and onions and continued cooking the bacon, peppers and onions until they were softened, golden and the bacon crisped. I made sure everything was evenly spread across the bottom of my skillet, then poured 2 beaten eggs over them and cooked it until the eggs were done and the peppers, onion and bacon mixture was embedded in the eggs and everything was a beautiful rich golden brown. I topped the entire hash browned omelet with diced bits of red hoop cheddar cheese and a few grinds of black pepper. I cut the omelet into 4 wedges and then stacked each of the wedges on top of my lightly toasted bun. Cooking everything that way kept it all together and nothing fell out or slid around on my bun when I bit into it. My Hash Brown Omelet Breakfast Sandwich was amazing! I snapped a few photos below. Enjoy! 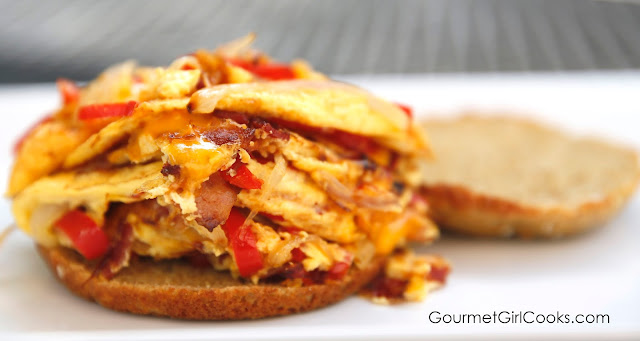 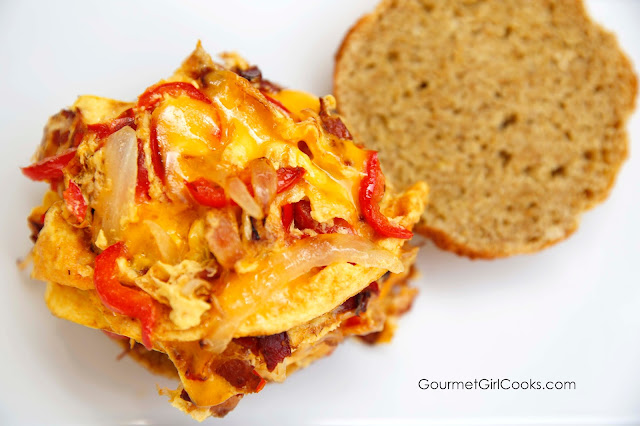 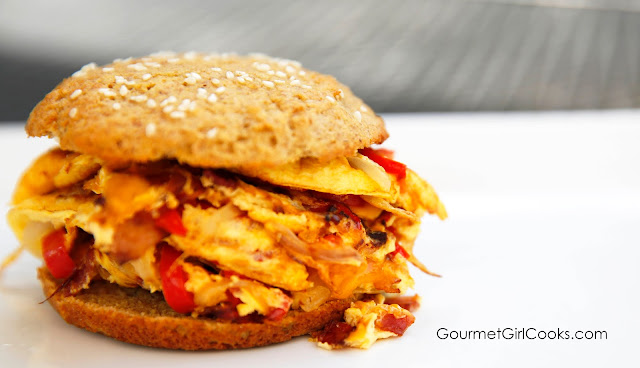 I see my husband liking that combo.

I hope he enjoys it! I made one for my brother, too, who after seeing mine thought it looked pretty good too. He loved it as well. :-)