This evening I made the BEST pizza ever. I know I've said that a lot, but this evening's pizza knocked it out of the park! We needed something to cheer up an otherwise gloomy week after Hurricane Irma came through Atlanta. I know many folks had it so much worse than we did, so I'm so thankful we had no serious damage...just lots of limbs down and a big mess in our yard; we lost power for a day and night and had no cable, internet or phone for 2+ days. We also lost some food in our 3 refrigerators but thankfully our frozen stuff stayed frozen! I did NOT want to have to throw out all the wild salmon I had frozen and stashed for the winter! LOL!

This pizza, as silly as it sounds just brightened up our week with all the colors and delicious flavor. I haven't done much cooking this week with everything that went on. So, tonight when I got home, I decided it was time for a comfort Friday night meal. I had a large 2 pound container of multicolored tomatoes; red, green, yellow, orange, maroon, etc. I halved about half of them (about 1 pound) and tossed them with olive oil and seasoned with sea salt and pepper, then spread them out on a parchment lined baking sheet and roasted them at 400 degrees for about 30 minutes. After they had roasted for about 10 minutes, I added 2 thinly sliced large shallots that I tossed in olive oil and spread them out with the tomatoes to roast along with them. I diced some pepperoni and sautéed it in a small skillet on the stove to begin crisping it and rendering off some of the excess fat (I don't care for greasy pizza). Rather than use traditional pizza sauce like I usually do, I spread my freshly baked Cheese Head Pizza Crust with half of a jar (about 3 ounces) of Mezzetta's Sun Dried Tomato Pesto, then topped it with shredded mozzarella cheese, then the roasted tomatoes and shallots, then scattered the pepperoni on top and popped it back into the oven for about 7 to 8 minutes. The flavors were unbelievable. There is just something about roasting vegetables that brings out their deep intense flavor. The shallots crisped like mini onion rings. Hubby who had initially turned his nose up when he found out I added shallots (he hates onions so I convinced him these technically were not onions), ended up loving it and saying it was one of my best pizzas ever! I snapped some photos below and included the easy peasy recipe for my Cheese Head Pizza Crust. If you haven't made it yet...what are you waiting for? Try it...you are going to like LOVE it!  Enjoy! 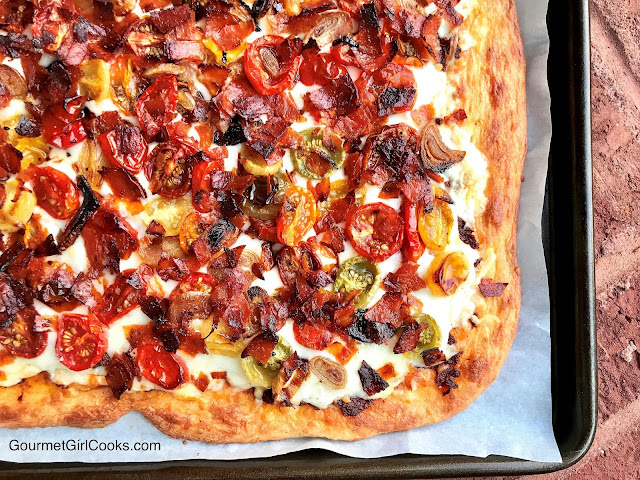 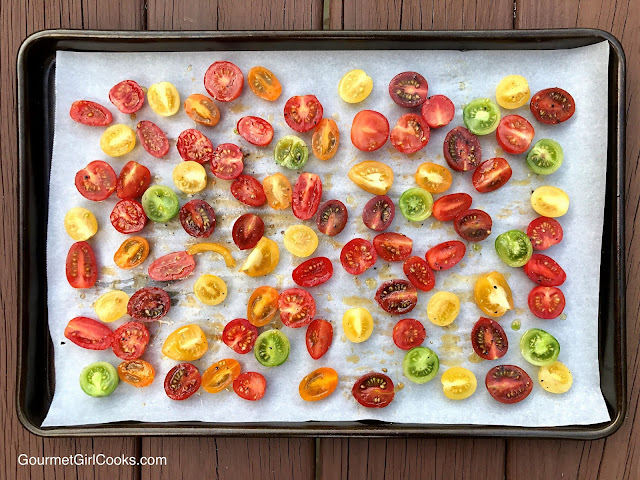 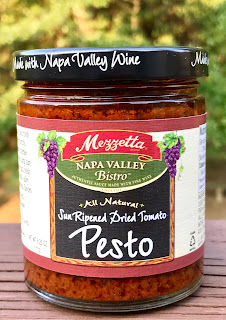 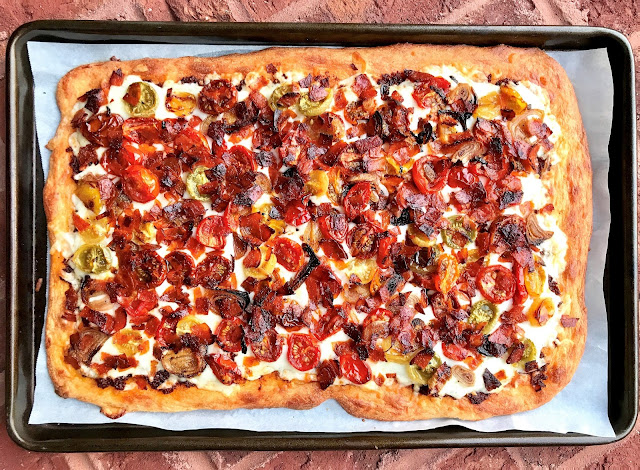 Place mozzarella and cream cheese in a medium bowl. Heat cheese in microwave on high for 45 seconds; stir and heat an additional 30 to 45 seconds or until a hot melty mass of cheese is formed.

While cheese is melting in microwave, stir almond flour, Parmesan, salt, garlic powder and Italian seasoning together in a small bowl. Add flour mixture and egg to bowl of hot melted cheese. Working quickly, fold and stir mixture together with a rubber spatula until a ball of dough is formed (make sure cheese mixture is hot before adding flour and egg).


Place ball of dough in center of parchment lined baking sheet. Press dough out with oiled hands or pour the 1 tablespoon of olive oil on top of dough to help press and smooth dough out using the rubber spatula into the desired shape (round, oval or rectangular) until about ¼-inch thick. Prick holes all over crust surface with a fork to prevent crust from bubbling up. Bake for 10 to 12 minutes or until lightly golden (be careful not to overbake so it doesn't burn when returning to oven to bake with toppings). Remove crust and top with pizza sauce, additional cheese, and any desired toppings. Reduce oven temp to 400 degrees F and bake an additional 5 to 7 minutes or until cheese is melted and heated through.

I'd been thinking about you when the weather map had Irma heading straight for Atlanta. I'm so glad to hear that you're safe and relatively unscathed ... although quite inconvenienced, to put it mildly. The heat must have been Truly Awful without power... and that's not even the first time in recent memory that you've been without A/C! We have a number of relatives scattered throughout Florida (& one in the Atlanta area.) Everyone seems to have survived with minimal effects, although temporarily without power, as you were. Not exactly "dodging a bullet," but as close as you can come to that, I suppose, Thank Goodness! Glad to hear that your Alaska salmon stash is intact, as well! :-)

Wow, what a pizza! Perfect comfort food for such times. I really need to try that with the shallots. Instant crispy little onion rings ... how about that! :-)