This evening I started out with the intention of grilling chicken for dinner, but as luck would have it when I went out to put the chicken on the hot grill, apparently our gas ran out and it was only registering 200 degrees. I already had a big sheet pan of tomatoes and garlic roasting in the oven that I planned to top the chicken with, along with sliced fresh mozzarella..so I had to improvise and pull out a skillet and pan sear the chicken on the stove instead. No big deal. Fortunately I had pounded my boneless skinless chicken breasts into 1/4-inch thick cutlets so they took only minutes to cook. This meal was so very simple yet so unbelievably delicious. I had half of a large container of Mucci Farms multicolored small tomatoes that I halved, tossed with olive oil and seasoned with salt and pepper and then roasted for about 25-30 minutes. It's amazing how much deep rich flavor roasting the tomatoes brings out. I also added some sliced fresh garlic half way through roasting the tomatoes. I topped each pan seared chicken breast with a slice of fresh mozzarella by Bel Gioioso that softened on the hot chicken, then topped it with the roasted tomatoes and garlic. It was simple fresh ingredients put together that were transformed into a really delicious meal that tasted like something you might enjoy in a nice restaurant. I snapped a couple photos below and included the easy peasy recipe. Enjoy! 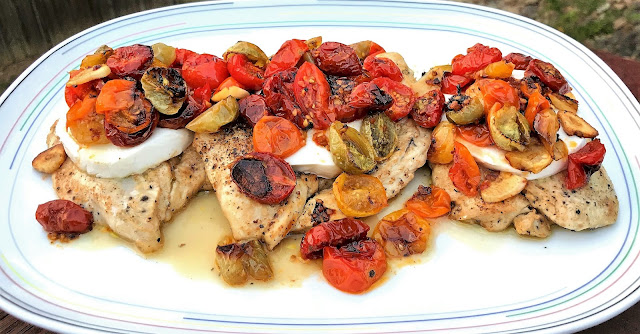 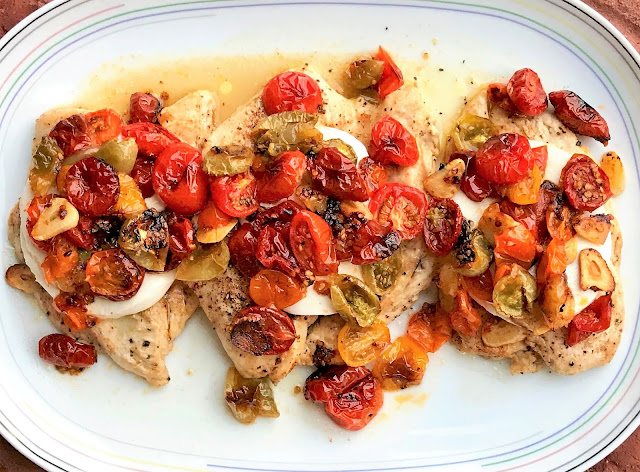 Preheat oven to 425 degrees F. Line a baking sheet with parchment paper. Season chicken cutlets with salt, pepper and dust lightly with cayenne; set aside. In a medium bowl, toss halved tomatoes with 1 tablespoon olive oil and season with salt and pepper. In a small bowl, toss sliced garlic with 1 teaspoon of olive oil and set aside. Spread tomatoes in a single layer on lined baking sheet. Place in oven and roast for 15 minutes. Remove tomatoes from oven, stir and scatter sliced garlic over top of the tomatoes. Return to oven and roast for an additional 10 to 15 minutes. While tomatoes are roasting, heat remaining olive oil in a large skillet over medium high heat. Place chicken breasts in skillet and cook for approximately 4 to 5 minutes per side until lightly browned. Place chicken breasts on a platter and top each with a slice of fresh mozzarella. Spoon roasted tomatoes and garlic over top.