Since youngest son came for dinner this evening, I decided to make him a new dessert.  I came across a recipe on Pinterest for..."Cinnamon Blondies" that incorporated 2 of his favorite things...blondies and cinnamon.  They were quick and easy to make!  Youngest son has always had the biggest sweet tooth in the family...and the worst part of it is that he is so skinny that if he turns sideways you can't find him!  :-)  Since I am not eating wheat or sugar, I had to rely on son and hubby to tell me how they turned out.  They looked beautiful and both of them said they tasted really good.  Baking with cinnamon made the house smell really good too.  I've already packed all of them up for skinny-minny to take home with him tonight.  I snapped a few pics below as well as the easy recipe. I hope to recreate this recipe into a grain-free version in the future. Enjoy! 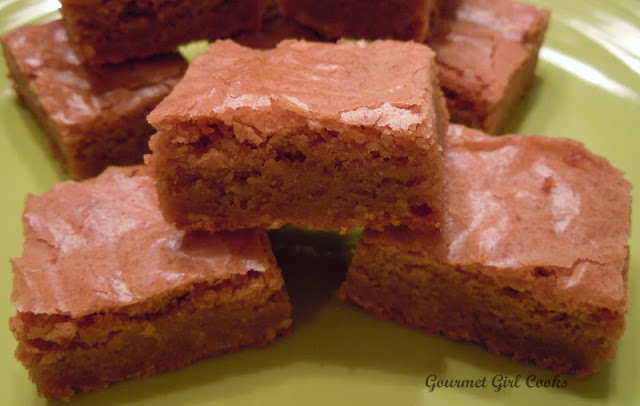 Preheat oven to 350F.  Line a square 8X8 or 9x9 inch pan with parchment paper and then grease the pan.

In a small bowl, whisk the flour, salt, and cinnamon together; set aside.

Melt the butter and brown sugar together.  Cook for 1 minute until it just starts to bubble around the edges- but don't let it come to a boil.  Pour into a large bowl and let it cool for about 10 minutes.

Add the vanilla to the butter/sugar mixture and then the egg and egg yolk. Whisk together.  Add the flour mixture and stir with a wooden spoon, just until combined.

Remove them from the oven and allow to cool completely in the pan on a rack.  Cut into squares.
Posted by Gourmet Girl Cooks at 11:24 PM

Hey - I was wondering what type of flour you used for these?

Hi Debbie -- this recipe used "regular all-purpose flour" -- these are NOT wheat/gluten free -- I made these for my son (thus far I am the only person in the house not eating wheat). Not sure if that is what you were asking or not.