This evening I didn't have to cook dinner since we had plenty of leftovers from the last couple of nights -- both the Chicken Scampi-ish as well as the Chipotle Grilled Chicken.  However, I was in the mood to tinker.and...for chocolate!  Last week, I received an order of a couple different gourmet cocoa powders that I have been wanting to try and they came just in time to cure my chocolate fix this evening!  I ordered both Valrhona and Scharffen Berger unsweetened cocoa powder.  I decided to try the Scharffen Berger cocoa tonight -- it came highly recommended from a fellow foodie follower and friend that also shares my love of both cooking and eating (thanks, Katie)!   I decided to make something completely quick and simple...and delicious, of course.  It is so simple that it is almost embarrassing to call it a recipe...but I guess when you mix multiple ingredients together, regardless of how simple it is...that's called a recipe!  So, tonight I bring you...Mousse a la Grecque au Chocolat....I know, you probably thought..."what WHAT???"  Basically, I made chocolate mousse (which is French) and used Greek yogurt...which obviously is NOT.  So we have a bi-national dessert here.

I had about 3 tablespoons of heavy cream left in a carton that I poured into a small deep bowl and using a tiny whisk (that is so cute), I beat the heck out of it for a few minutes until it was whipped and fluffy, but not to the "stiff peak" stage.  I added 2 tablespoons of Swerve Confectioners Style sweetener and beat that into the whipped cream and then slowly folded in 3 tablespoons of the Scharffen Berger cocoa powder and beat that a little -- it became thick, fluffy and creamy (almost like frosting).  I added 1 cup of Greek Gods full fat plain Greek yogurt and folded that into the chocolate cream mixture and added about 25 drops of liquid stevia.  I could have added more Swerve instead of stevia, but I really liked the "creamy and fluffy" texture I currently had -- so I opted to use the drops instead to get more sweetness without adding very much volume to change the current texture that I really liked.  I purposely didn't want it overly sweet because I wanted to taste the chocolate...and taste I did!  I had a few spoonfuls and put it in the fridge to enjoy later this evening.  My "plan" is to have half of it tonight and half tomorrow night as a special treat....but you know what they say about plans...(they are made to be broken)!   :-)   Below are a couple pictures of my Mousse a la Grecque au Chocolat...or French Chocolate Greek Mousse!  ;-)   Enjoy! 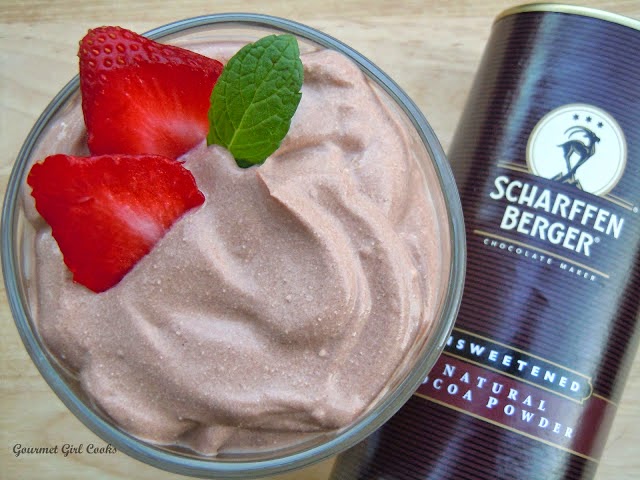 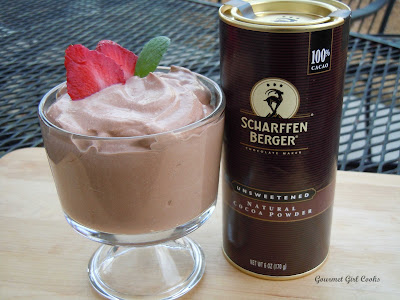 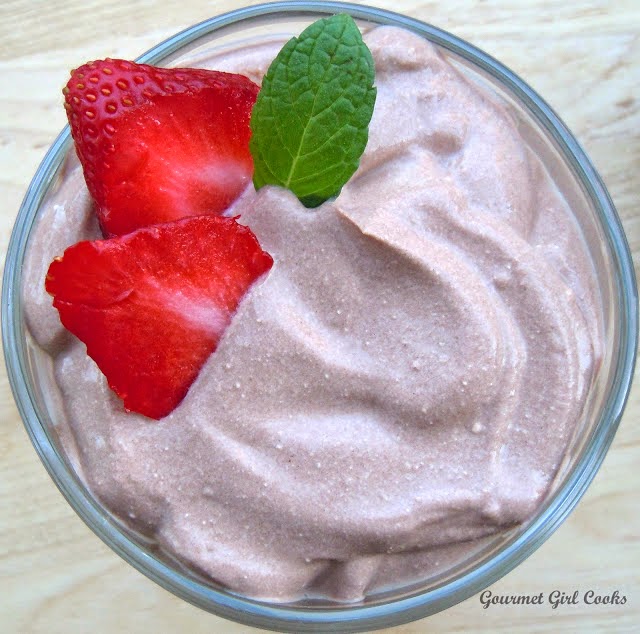 How elegant! And so very, very *creamy* and *chocolate-y*! What more could anyone want! :-)

I decided to try the Greek Gods yogurt a couple of weeks ago, after having seen it on your blog somewhere along the way. I've been a Stoneyfield Organic fan, but Greek Gods is really giving it a run for it's money. Great stuff!

Hi Cybersis! Which Greek Gods did you get -- the full fat version (in green container) or the 2% version (can't remember the color)? I also like Fage 2% too. I usually get the Greek Gods full fat (I think 10%) in the green container or Fage 2% that I take in the 7-oz cups for my breakfast on work days. :-)

I got the plain full fat version. Very mild ... not sour, which is what I like about Stoneyfield, too. I'll have to see if I can get the Fage to try, too.

I need to try this, I usually have a Wheat Belly choc chip cookie for my dessert at night, well OK, maybe two (insert a blush smiley here).

I usually buy Chobani Greek yogurt and really love it but I can't find any full fat or even 2% where I shop. I can find the Fage 2% and love it too.

Thank you GG, love your blog and you've helped me so much.

Hi Roye! Thanks so much for the kind comments. I don't think I have had the plain Chobani before (only the fruity flavors of it before I began Wheat Belly). I like the Fage because it isn't as tart as some varieties. The Greek Gods isn't tart either. Either way, since you add cream to this mousse, it adds enough fat to make it feel creamier and lighter if you beat the cream until fluffy. No need to blush about the cookies on this blog! Wheat Belly cookies are good for you...right??? ;-)

Hi Cybersis! Is the Stoneyfield Organic you usually get a Greek yogurt or regular plain yogurt? I will have to try that. You are right -- it is not as tart or sour as some of them which I prefer. Fage 2% is what I eat the most of...the Greek Gods is my "dessert yogurt"... :-)

The Stoneyfield I usually get is the regular. Today I opened a little carton of Greek which I'd gotten to try but had forgotten about ... it ended up getting shoved to the back of the refrigerator. That never happens to you, I'll bet. :-) The flavor was a little more "assertive" than the regular (perhaps due to being a little past the expiration date?) But it was still yummy and not sour.

Although I loved the full fat, prior to WB I'd usually alternate between the low- fat and the non-fat. The lower the fat content the more tart the flavor, at least that's how it works with Stoneyfield, but still not overly sharp like other brands I'd tried. Now, however, I'm sticking with the full fat, 'cuz I love it and we have WB's blessings on it. Stoneyfield does seem to separate more than other yogurts, but you just pour off the liquid and dig in!

Well, CyberSis -- I will definitely have to try the Stoneyfield next time I see it. I know I've seen it at Whole Foods -- but will check and see if it is at the other stores I shop at too -- oh, and P.S., you don't want to see what sometimes gets pushed to the back of my fridge or buried in the bottom of my produce drawer! ;-)