This evening I made a quick and simple dinner...a Sausage & Squash Saute using up the veggies that needed to be used as well as the chicken andouille sausage I picked up a few weeks ago. I decided to make "Hash Brown Faux-Tatoes" using the small head of cauliflower I had. I cut it up and cooked it covered in 1 cup of water until tender, then removed the lid and cooked off all of the water until the bottom of the pot was fairly dry (but not burned). I used a spatula to coarsely chop the cauliflower while it was in the pot and then tossed in a few tablespoons of butter, a couple sliced green onions and creole seasoning (Tony Chachere's), to taste, then tossed it and browned it over medium heat in butter until it was golden on one side and then scooped it up with the spatula, flipped it over and browned on the other side (just like you do when you make regular hash browns). It didn't get crispy, but did dry out a bit and browning it added flavor along with the butter, onions and creole seasoning. You don't need to use the creole seasoning -- simple salt and pepper would be good, too. While that was cooking, I sliced a package of the sausage in approximate 1/4" slices and browned them in a skillet with a little olive oil. While the sausage browned, I cut up the veggies. I sliced 2 small zucchini, 2 small yellow squash, and a few yellow, red and orange mini peppers. I transferred the browned sausage to a bowl and set it aside. I added the veggies to the same skillet the sausage had browned in. I sauteed the veggies just until done, but not overdone or mushy (tender-crisp). I added the sausage back to the skillet with the veggies and tossed everything together.  I served the Sausage & Squash Saute over the Hash Brown "Faux-Tatoes". It was a fairly quick, simple and tasty dinner. If you are interested in checking out the sausage I used, there is a picture and information here on my Cajun Stir-Fry post. I purchased the sausage from Costco. I snapped a few photos for you to see below. Enjoy! 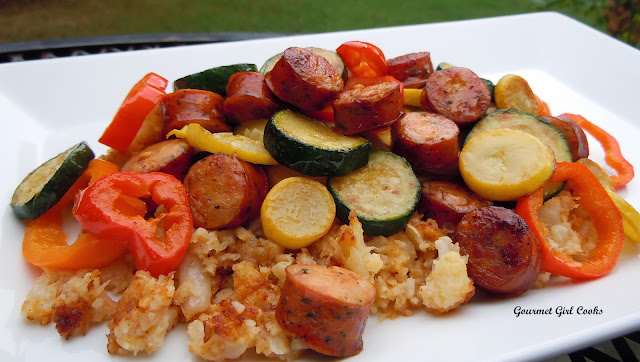 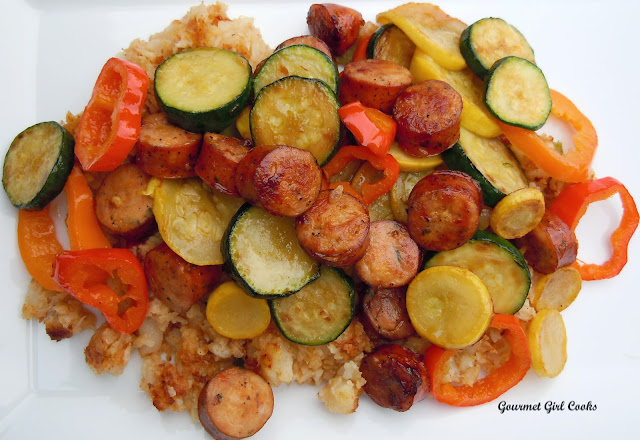 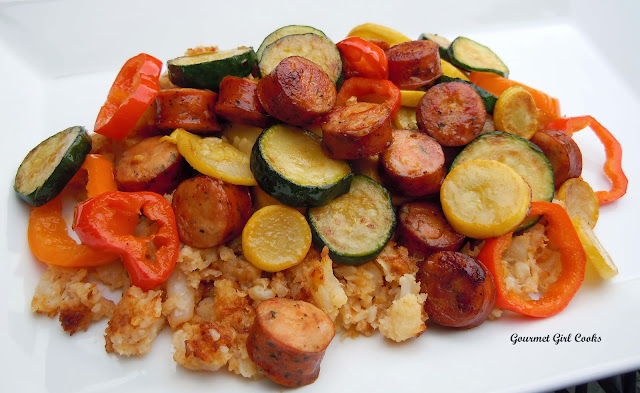 that looks and sounds very delicious, as usual. We had your Cobb Salad for supper tonight. Just sounded so good...and it was!!

Thanks, Sherie! Glad you liked the salad, too! This is a great time of year to enjoy big salads for dinner! :-)

I have all these ingredients in the frig. I'll try it tomorrow. I made your pizza crust today and really liked it - a change from the delicious cauliflower crust I have been making. My 8 year old liked the pizza, too. Thanks!!!!!!

Thanks! So glad you enjoyed the pizza crust -- hope you enjoy this one, too! How awesome that your 8-year old enjoyed it as well. Kids are the most discriminating when it comes to how things taste. So happy you enjoyed it -- thanks for letting me know. :-)

GG, this is the perfect dish for my husband, being Swiss he loves sausages. I of course do too, still remember my mother serving Sausages with a huge side dish of sautéed onions(in Butter). Just wish onions were low carb!
This recipe looks fabulous as usual! Thank you GG.
How is the weather?- we are actually cold right now , I changed to winter pajamas, LOL!

Hi Barbara! Thank you -- I guess my husband's "low tolerance" for onions keeps me from using lots of them...but I love cooked onions in dishes (I will consider that his contribution to keeping my onion carb count low...LOL). Today our weather started out a little damp and dreary, but ended up sunny most of the day -- it is still sunny outside now at 8:10 p.m and 82 degrees out. I would love to be able to pull out my flannel pj's -- but I don't think I will get to do that for a while! Send some of your cool weather my way, please! :-)

GG, I wanted to tell you that your word-creation "faux-tatoes" is fantastic! I really like that!

Before I put on my cozy pajamas I will send some of our cold air your way!
Be well and safe, Barbara.

Hi Barbara! LOL -- I wish I could take credit for it, but I have seen it used other places a few times before! It is a pretty good description though, isn't it! I can't wait until it is cool enough for cozy pj's here! Hope you are doing well. :-)