We are currently getting torrential rain here and the weather report on the news said we could get up to 3 inches of rain by tomorrow.  It's now supposed to rain here through Sunday...yuck!  I ended up making Eggplant Lasagna for our dinner tonight since grilling anything was absolutely out of the question.  I stepped out onto my patio to snap a few quick pictures of it on the table out back and the sky opened up and it began pouring down rain.  Fortunately the table is under a big umbrella, otherwise my lasagna and I would have been totally soaked.  I snapped the pictures quickly and hurried back into the house.  Even with the overcast skies...natural light is so much better for taking pictures.

I made this lasagna just like I would make regular lasagna, but substituted thinly sliced eggplant (about 1/4" thick) roasted in the oven until tender for the lasagna noodles.  When I make lasagna using zucchini or eggplant, I usually don't make it very saucy (it is better to spoon additional sauce over each serving if additional sauce is desired).  This evening I browned 1 pound of ground sirloin with some diced Vidalia onion and minced garlic (seasoned generously with sea salt, black pepper and red pepper flakes) and layered it separately from the sauce instead of making a meat sauce.  I used about 3/4 of a jar of Rao's Arrabbiata sauce.  I made 3 separate layers of eggplant, 1 meat layer, 3 cheese layers (1 cheese layer with fresh mozzarella and another cheese layer of sliced regular mozzarella and finely grated Parmesan and then topped it with the final layer of Parmigiano Reggiano).  I began with a thin layer of sauce on the bottom of the casserole, added another thin layer of sauce over the meat layer and finished it with sauce on the top, ending with shredded Parmigiana Reggiano. It was simple to put together.  I had originally planned to put some ricotta cheese in as well...but decided not to at the last minute. It's kind of a cross between lasagna and Eggplant Parmigiana (only with meat in it, too).  I baked it uncovered at 350 degrees F for about 45-50 minutes and then broiled it for a few additional minutes until it the cheese on top was bubbly.  I let the lasagna cool for about 20 minutes before cutting so the cheeses would set back up a bit and make neater pieces when cut.  It was delicious!  I snapped a few photos for you to see below.  Enjoy! 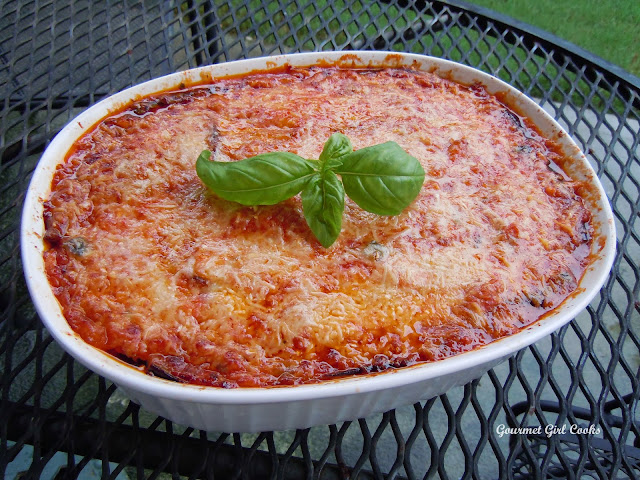 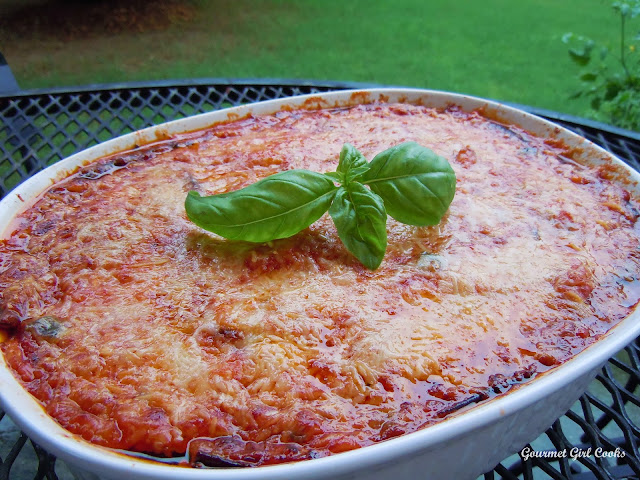 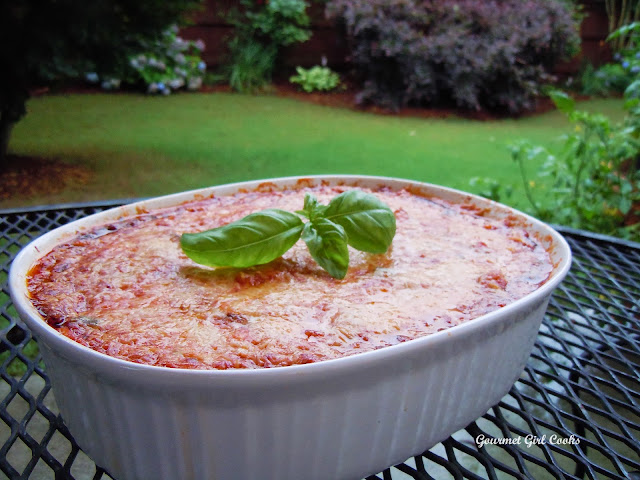 What perfect comfort food for a rainy holiday. Love it!

Thanks, CyberSis! It really was nice comfort food for a yucky day! :-)

I made this lasagna on Friday after I saw your post. I sliced the egg plant thin and baked in oven for 15 minutes. Then I put it all together. However, we had a change of plans for Friday night and didn't get to cook it.

Then we got busy on Saturday and still didn't cook it. So, on Sunday put it in the oven on a timer and when we came home from church it was ready. It was wonderful and so much easier to make than I thought.

I also was a little worried about the fact that it sat for a day and a half in the fridge before I baked it, but the flavor was wonderful

Being wheat free since Oct, 2012 my hubby has been disappointed in previous attempts to make lasagna. However, he loved this and even took the leftovers to work today for lunch.

Thanks so much for posting things we can eat being wheat free. The recipes really give us a chance to try new things, because you are always trying new things.

Hi Janet! So glad you enjoyed the Eggplant Lasagna" -- and also glad that you "accidentally" tested the fact that it can easily be made ahead of time and baked later without it affecting it -- that's a nice thing to know! So glad both you and your hubby enjoyed it, too! I know HE has a good lunch today! Thanks for letting me know. :-)

Good deal ... a make-ahead dish. That IS a nice thing to know! And it passed yet another hubby test, too! I've got to bump this recipe up in my queue! :-)

Hi CyberSis! Yes...it is good to know. It's nice to know that some of these things can be made ahead without compromising the outcome! And, yes...passing another hubby test is a good thing, too! ;-)

I made this for dinner tonight and it was absolutely delicious!! I used sausage instead of ground beef. My husband really liked it too and he usually won't touch eggplant. He's a tough sell. I have been gluten free for almost 3 months and your blog has been a tremendous help. You make simple food look beautiful. Thank you for sharing your journey. Rita

Made this two nights ago. It was wonderful. 2nd day was even better. I've never made any kind of lasagna before so this was an adventure. I did go ahead and make a meat sauce. You're right it was a little watery but still very good and so easy. I used Ricotta, mozzarella & parmesan. Now it's on the list for a repeat. Thanks so much. Barbara H in Oklahoma

Hi Barbara -- So glad you enjoyed it! Congrats on making your first lasagna too! It's one of my favorites -- I've been looking for some good eggplant recently to make this! :-)