Last night I made Slow Cooker Boneless Beef Chuck Short Ribs for dinner. I picked them up at Costco this past weekend. They turned out great. They were super tender and extremely flavorful and unlike some cuts of short ribs, they were not unusually fatty which is a good thing when cooking them in a crock pot (unless you like grease soup...LOL). Rather than go with a tomato based type barbecue sauce, I opted to go with a lighter sauce that has a touch of vinegar and hint of sweetness. It's sort of a twist on North Carolina style barbecue that uses a vinegar based thinner type sauce. Hubby lived in North Carolina for a few years and really developed a taste for that style and flavor. I didn't want to go too vinegary so I added a bit less. This was a very simple recipe to put together. I chose to brown the ribs well and caramelize them to add both color and flavor. Other than some seasonings and spices, the only other added ingredients (besides the ribs) were a bit of onion and the sauce ingredients. I wanted to add a bit of smokiness, so I used smoked paprika as well as ancho chile powder which has more of a smoky flavor than it does spicy like Chipotle. I wanted to use a bit of chili sauce to add to the stock along with the vinegar, but didn't have any so I improvised by mixing a few tablespoons of ketchup (with no HFCS) with a bit of Asian style chili-garlic sauce. I had originally considered using 1/4 cup of that (and no ketchup)...but after taking a tiny taste of it and realizing how hot and spicy it was, I decided to only use 1 tablespoon of it and mix it with a little ketchup for flavor and only a hint of spiciness.

They turned out excellent...super tender and very rich tasting. I think you could easily add a few more tablespoons of vinegar (I used red wine vinegar) without it being too much...but I liked them as is. I also added a little Swerve Sweetener for a bit of sweetness to balance the vinegar flavor. I will definitely make these again. The recipe made plenty of very flavorful "au jus" that hubby enjoyed spooned over his ribs (you could also reduce and thicken it, too, if you preferred). I am not a big gravy or sauce person, so I opted to eat them "au naturale". They went very well with my Baked Cauli-roni & Cheese casserole. I snapped a few photos below as well as the super simple recipe. Enjoy! 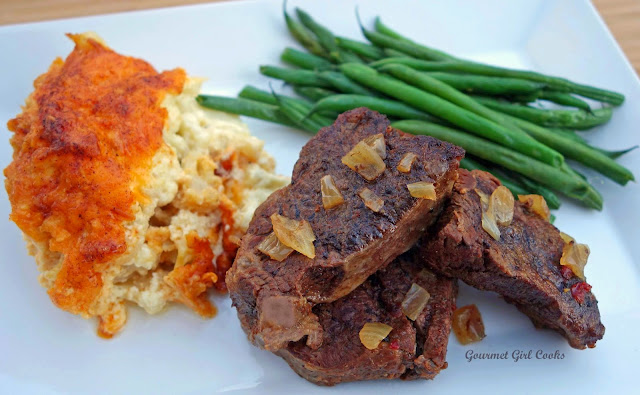 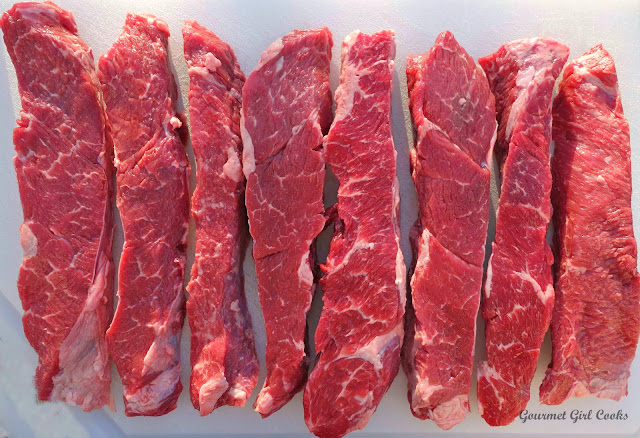 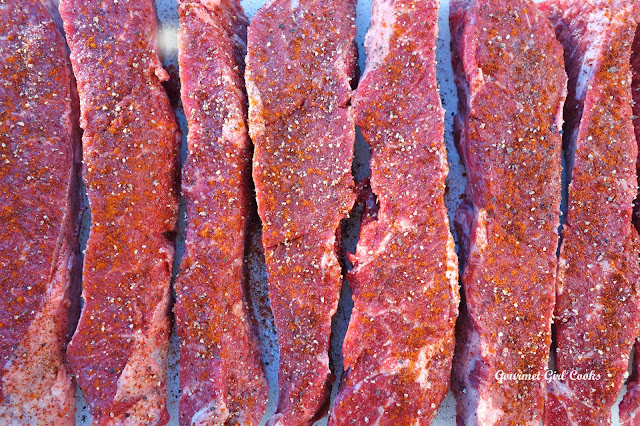 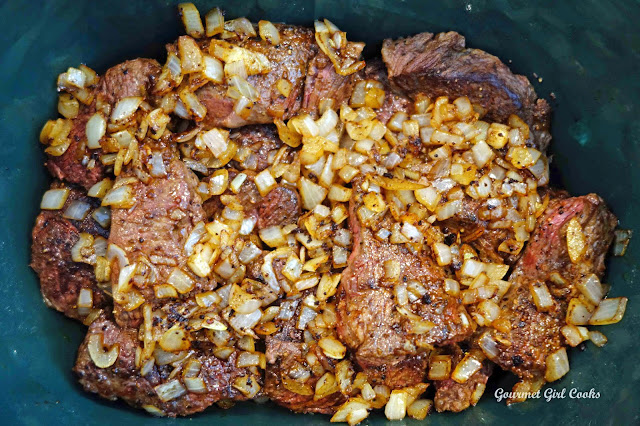 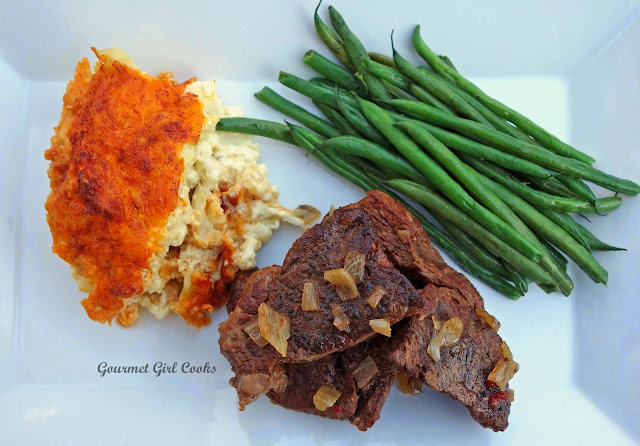 Using paper towels, pat ribs dry. Season both sides with salt, pepper, ancho chile powder, and smoked paprika. Heat oil over medium-high heat in a large dutch oven until hot. Brown ribs on both sides, about 5 minutes per side. Place ribs in bottom of a 6 to 7 quart slow cooker.

Using same pot ribs were browned in, add diced onion and cook over medium-high heat until tender-crisp and lightly caramelized, about 5 minutes. Spread cooked onions on top of ribs.

In a medium bowl, combine ketchup, chili-garlic sauce, vinegar, sweetener and beef stock and mix well. Pour over top of ribs. Cover slow cooker and cook on low for 8 to 10 hours.

W-e-l-l ... aren't these gorgeous! I'll have to stop "mourning" my old short rib sauce recipe for sure now and move on! Thanks for the fresh "perspective"! :-)

Hi CyberSis! LOL...now, this won't necessarily cease your "mourning"... you will probably always be comparing every recipe to THAT one! But, maybe the longer you are away from it...the fuzzier your recollection of it will be (although I doubt it). ;-)

Interweb greetings! Found some BBCSR's on sale the other day, AND they had a $4 off coupon attached - not my favorite cut but lately I have to be really frugal.

So many of the recipes online are the same so when I saw this one I knew it was "the one".

Followed almost exactly, but I only had sriracha chile sauce, balsamic vinegar, and red wine instead of broth.

Also, red onion and mushrooms were the only veg on hand.

That said - delicious beyond belief. The sauce alone is amazing.

Served it over baked & buttered barley, served with the same red wine in the sauce. Amazing. I will be on the lookout for short ribs.

Thanks for sharing this!

Thanks, Lisa -- glad you enjoyed them. Hope you find the short ribs soon! :-)

Excellent recipe! I also amended a bit - added some mesquite smoke flavor, blood orange balsamic (instead of a sweetener) sweet Thai chili - basically what was in the kitchen and it was wonderful - served it over Costco Quinoa and brown rice - Yum!

Thanks! Your amendments sounds delicious! Most of the time, there are ingredients in our kitchens that we can easily substitute to get the type "flavor" we are looking for...sweet, spicy, tangy, etc. I have never seen blood orange balsamic before but it sounds wonderful!!! :-)

Putting the slow cooker on now! Very excited for dinner tomorrow after reading everyone's comments. I added 1/4 red wine to mine! I'll let you know.

I hope you enjoy them. Let me know if you liked the wine in them; I may add some next time. I need to make them again soon, too! :-)

GGC, you know me, always asking questions! I saw the Hunts Ketchup, was wondering why you chose to use one with a sweetener as opposed to using one with no sugar added and an artificial sweetener as you use in other places. Just trying to learn from you, I hope you don't mind...

I am in awe of your ability to create delicious food that is so healthy, I cannot thank you enough!!! :) I do think of you and know that it's not easy with your Mom not with you--I lost my Dad 13 years ago to cancer (within 2 months he was gone, such a shock and what grief too!), and I never stop missing him but it does get easier in the sense that your memories can make you smile. I am always grateful too that I had a special, wonderful Dad who loved me so much--some people never experience that and I am thankful. It does help. Just wanted to encourage you if I can...

Thanks so much. Oh, and I don't mind questions at all. To be perfectly honest, I used it because that was what I had in my fridge and knew there would only be 3 tablespoons used for the entire recipe using 3 pounds of beef so the amount consumed per person would be miniscule. I agree that one without any added sugar would be best and if I were going to use that on a larger amount, I probably would have purchased or made one without any sugar.

You are right...losing my mother has not been easy and there are good days and bad. Last week in particular was a bit harder because it was the 2-month anniversary of her passing as well as her birthday. You are so right about being grateful that you had a wonderful Dad that loved you. I too was blessed with that as well and know that many people sadly never know what that is like. As always, thanks for the kinds words and encouragement.