Well, Sunday night we had leftover Chicken & Spinach Manicotti...and it was delicious.  Since I got the night off cooking dinner, I decided to put the beautiful strawberries I picked up Saturday to good use...and I thought what better way than Strawberry Shortcake to showcase strawberries being used in a dessert!  After perusing numerous recipes, I chose one that was a cross between a Betty Crocker recipe and a similar version found on the back of a Bisquick box.  The main difference that I could tell between the two recipes is that Betty Crocker's called for 1/4 cup sugar to be tossed with the berries and Bisquick called for 1/2 cup.  I decided to use 1/3 of a cup, because 1/2 cup seemed like it might be too sweet for my taste, and it actually turned out plenty sweet enough with 1/3 cup.  I also added 1 teaspoon of double-strength vanilla to my batter and then I sprinkled the shortcakes with some cinnamon sugar on top before popping them into the oven.  Betty Crocker's recipe called for you to make your own whipped cream. Bisquick's called for you to use thawed "frozen whipped topping".  Instead, I used Reddi-wip real cream that I found in a "fat free" version to help reduce the calories and fat a bit.  It reduces the calories from 15 calories for 2 tablespoons to 5 calories for 2 tablespoons....so I thought I'd try it.  I must say that I did not miss the fat in the whipped cream at all.  The container of strawberries that I picked up was 64 ounces and every single berry was perfect -- I did not throw one single berry away (I sliced and sugared the extra berries so we could heap them on if we wanted to).  It is an absolutely delicious and beautiful dessert and one that I will make again and again.

I've included some pictures below as well as the modified recipe that I used to make my strawberry shortcake.  I loved photographing the berries...they were absolutely gorgeous.

1.  Mix strawberries with 1/3 cup sugar; set aside to macerate (the sugar will help release the juice from the strawberries and makes their own syrup).  I cover and refrigerate them.

2.  In a bowl, stir Bisquick mix, milk, 3 tablespoons sugar, butter, and vanilla and mix until a soft dough forms.

3.  Divide the dough into 6 portions and drop by spoonfuls onto an ungreased cookie sheet and bake for approximately 10-12 minutes at 425 degrees until lightly golden brown.  Optional:  Sprinkle tops with sugar or cinnamon sugar before baking.  Split the warm shortcakes in half; fill and top shortcakes with strawberries and whipped cream.  Enjoy!

***P.S.  If you want to see how tossing the sugar with the sliced strawberries (macerating them) looks, I've taken a picture below of how much juice has been released after a couple of hours.  There is no need to add any additional liquid to create syrup, they create their own. 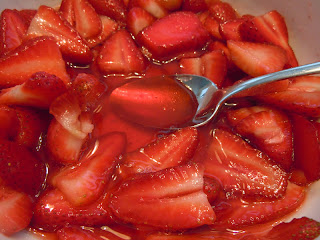 You've inspired me for Memorial Day! Thanks.

Great...hope you like it as much as we did!

Genius! I have a very complicated Martha Stewart recipe for strawberry shortcake that is of course delicious--but never gets made because it takes forever and calls for ingredients I don't normally have on hand. I see a whole lot more strawberry shortcake in my families future!!! ;)

Hi Rachel -- I think you would like this one too. What I realize is that there are plenty of recipes that make delicious food without spending all day in the kitchen. I hope you like it...although Martha Stewart is hard to beat! ;-)