Tonight I was really in the mood to cook. I always enjoy cooking (except for rare occasions)...but tonight I was really itching to try some different things.  I wanted to make stuffed peppers tonight...but I didn't want to wait 2 hours to eat. Usually, I make my stuffed peppers on the stove in a large pot or dutch oven and cook them standing up in a little liquid (broth, tomatoes, etc.). Tonight I wanted to try precooking the filling first and baking them in the oven so I made "Stuffed Pepper Bake"...which is stuffed peppers baked in the oven and the filling is pre-cooked to cut down on time. They turned out really nice and stayed intact. Sometimes when you cook them on the stove, they sort of fall apart when you take them out of the pot.

I picked up some absolutely gorgeous red bell peppers this weekend -- they were HUGE!  I also bought some beautiful large whole mushrooms.  As much as I wanted to chop some of those mushrooms up to add to my pepper filling/stuffing...I decided I'd better not or hubby will call a 911 and proceed to dismantle the beautiful stuffed peppers into a heap of crumbly mess while trying to hunt down every last one of them (no matter how small)!  In case you haven't seen me mention this before in my previous posts -- he has a serious aversion to mushrooms -- one of the worst cases I've ever seen...LOL.  Basically I browned a little over 1 pound of ground sirloin with some chopped onion and seasoned it to give it a "spicy sausage" type flavor.  I wilted a bag of baby spinach and quartered some little grape tomatoes and mixed in some shredded mozzarella to serve as the "glue" to hold the filling together and crumbled feta cheese to add more flavor to the "stuffing".  Oh, I almost forgot to mention that I made cauliflower "rice" too and added a cup of that to my meat filling.  Now how does that sound for healthy???  I have wanted to make cauliflower rice for a while now and just kept putting it off for some reason.  It was extremely simple to do -- you can cook it quickly on the stove top or steam it for a few minutes in the microwave -- I chose to steam it plain in the microwave since I wasn't eating it like rice (I was using it in a recipe as rice).  I only used 2 large red bell peppers and halved them to make "pepper boats".  I heaped the stuffing in the pepper halves, topped them with a little shredded Parmigiano Reggiano and poured about an inch of chicken stock around the bottom of the casserole dish and baked them lightly covered with a foil tent for about 30 minutes. The peppers turned out great -- you had a melange of flavors -- the sweetness of the red bell peppers, the spiciness of the seasoned beef and the saltiness of the feta.  Oh...I also found a way to get my mushroom fix tonight!!!  I had about 1/4 of the stuffing mixture left that wouldn't fit into my peppers....so I cleaned out 8 large mushroom caps and loaded them up with the rest of the "stuffing" and baked them in the oven after the peppers came out.  I had one stuffed pepper half and one stuffed mushroom...and I was "stuffed" too after eating dinner!   :-)   I snapped a few photos to post below as well as the simple recipe.  Enjoy! 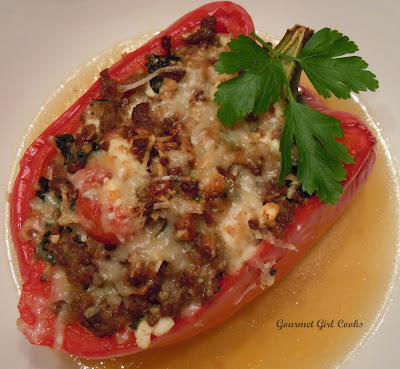 Preheat oven to 400 degrees F.  In a large nonstick skillet, heat olive oil on medium-high heat and add diced onions and cook for a few minutes.  Add ground sirloin to the pan with the onions and brown well, breaking it up as it cooks.  Cook off all juices.  Add sage, black pepper, salt, garlic powder, cayenne, red pepper flakes and stir into meat mixture.  Transfer to a large bowl and set aside to cool for a few minutes.

While meat mixture is cooling, place bell pepper halves on a microwave safe plate and cook on high for about 3 minutes to soften and make pliable (I cooked them 1 minute at a time and checked for doneness after each minute).  You don't want to completely cook them, just par-cook and soften a bit.

Add wilted spinach, grape tomatoes and optional cauliflower rice to the bowl with the meat mixture and toss to combine.  Stir in mozzarella and feta cheese and mix well.  Fill par-cooked pepper halves with the stuffing mixture and place in a shallow casserole dish.  Pour stock around the bottom of the casserole dish so they are sitting in approximately one inch of stock.  Sprinkle Parmigiano Reggiano or parmesan on top of stuffed peppers.  Cover and tent lightly with foil and bake for 30 minutes.  Remove foil and run under broiler for a couple minutes, if desired, until cheese is bubbly and lightly browned.  Serve in shallow bowls and spoon broth on top of or around peppers, if desired.   Serves 4.

*Note:  Cauliflower Rice Recipe:  Using the large side of a box type grater or a food processor, grate a small raw head of cauliflower and place in a microwave safe covered dish and microwave on high for 4 to 5 minutes until al dente.  If desired, you can season with butter, salt and pepper.  I used it plain for this recipe.  The cauliflower rice can also be sauteed for a few minutes in a tablespoon of olive oil on the stove top if preferred.

Another gorgeous creation! Thank you for all the delicious culinary inspirations.

You are welcome! Happy Cooking! :-)

Trying this one tonight, I'll let you know how it goes!

Hi Paula -- I hope you enjoy. It is so easy to just add what you like to the "stuffing" or omit something you don't like. Just make it taste good to you before putting it in the peppers. It's pretty simple and easy. :-)

It was delish!!! I followed your recipe, except the spinach, because I didn't think the hubby would even try it, but next time it's going in!! Definitely a keeper!

Glad you enjoyed them Paula! That's the easy part about it -- you can add or remove ingredients to make them perfect for your own tastes. Glad your hubby enjoyed them too! :-)