Today was a crazy day here weather wise. Besides it being freezing cold here (literally)...we awoke to snow flurries that continued on and off during the day. While there wasn't any accumulation, it was totally bizarre to see snow of any sort here in March. What we are usually plagued with is sky-high pollen counts this time of year instead. Even at lunch time I saw snow flurries and I had to take a double take to believe that I was still seeing "snow" in the air when I was returning from lunch. Well, tonight hubby had a meeting he had to attend and I wasn't expecting him home before 9:30 or 10:00...so that meant it was just little old me for dinner...well, me and Spike (the Bichon) that is! So, I decided to make myself a super simple "Pizza for One". I made a batch of my Almond/Flax/Parmesan Herb Crust and decided to keep the toppings simple. After I baked the crust for 15 minutes, I topped it with some shredded mozzarella cheese and a diced (and seeded) fresh roma tomato and a light sprinkling of Parmigiano Reggiano and then popped it in the oven to bake for 5 minutes and then switched to broil for about 2 minutes until the cheese just began to bubble a bit. After it came out of the oven I topped it with some fresh torn basil and cracked black pepper. It was simple, fresh, quick and most importantly...delicious!  On a freezing cold night like tonight, this was so much better and quicker than any take out pizza I could have ordered...hands down!  ;-)  I snapped a couple photos for you to see below and the link to the crust recipe is embedded in the different colored text above.  Enjoy! 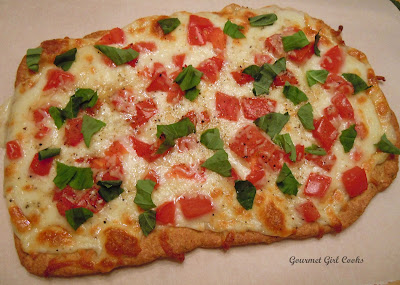 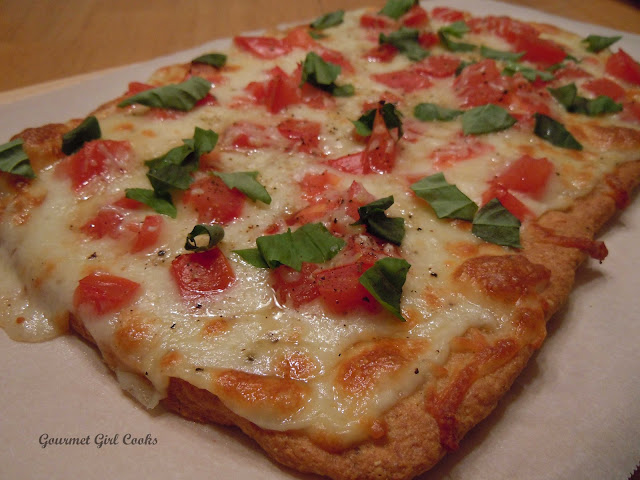 Thank you for your blog. I so enjoy it. I can't keep up with you in the kitchen, but I love seeing what you're doing. Some of your recipes are now my staples--pizza, feta cheese pie--with more in my recipe binder to try. Calzones tonight!

Hi Kathy! Thanks so much for the kind words. So glad you are enjoying experimenting in the kitchen with some of my recipes! I wish you well on the calzones, too! The secret is not overstuffing them -- I have a hard time not thinking more is better -- even when I used to make them with regular pizza dough I overstuffed too. The dough on these calzones is more delicate and it makes it hard if you overstuff. Hope you enjoy and again, thanks for letting me know you enjoy following my adventures on the blog! :-)

I followed this recipe and,it,tasted great but,I fel the dough was,stick so I adde more grated cheese and almond flour. Could using almond meal instead of flour be the sticky difference?

Hi Mr. D. -- the dough is going to be sticky -- not anything like regular flour dough. But, if you spread it out with a lightly oiled spatula or lightly sprayed parchment paper, the baked product is very much like regular cooked pizza dough. You want it to be thick but it will be somewhat sticky until it is baked -- the trick is to spread it out thin. I use almond flour (instead of almond meal) because it is finer and closer in texture to regular wheat flour. That might have been part of why yours was stickier than usual. Hope that helps! :-)