It was overcast most of the day and it finally began to rain early this evening.  We did our Costco run late this afternoon.  I picked up some wild sockeye salmon, Kerrygold butter (that they had just go in), some Amylu smoked Andouille chicken sausages (no msg, nitrites or nitrates and gluten free) and a bunch of other items.  I decided to use the sausage to make dinner this evening and thought about what I might do with it on our way back home.  I had also picked up a bag of multi-colored mini-peppers (red, yellow and orange), and decided to make a Cajun Stir-fry with the sausage and peppers.  When I got home, I sliced the sausage links diagonally, and since they are fully cooked, they just needed to be sauteed a bit to brown and heat up.  I sliced several peppers up and a green spring onion. I cooked the sausage in a non-stick skillet with a tiny bit of olive oil -- it only took a few minutes.  I transferred the sausage to a plate and then added the sliced peppers to the pan and briefly sauteed them a couple minutes until crisp tender and then added the green onion in at the end and cooked another minute. I tossed the sausage back in the pan with the peppers and onion before serving.  While preparing the Cajun Stir-fry, I roasted some fresh asparagus with a little olive oil, sea salt and black pepper at 400 degrees for about 15 minutes.  I reheated the Yellow Cheddar Squash Casserole left from the other night and "boom" -- dinner was ready in no time.  The sweet mini peppers were a nice contrast to the spicy Andouille chicken sausage.  It was a great combination of flavors.  I snapped a few photos for you to see below.  Enjoy! 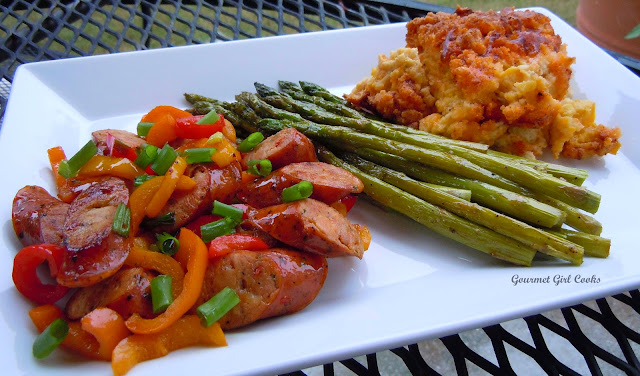 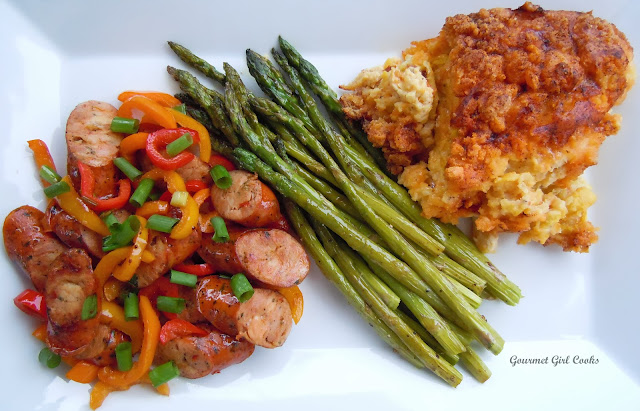 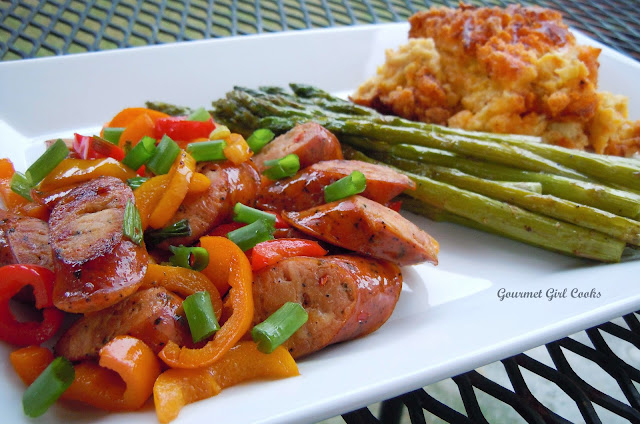 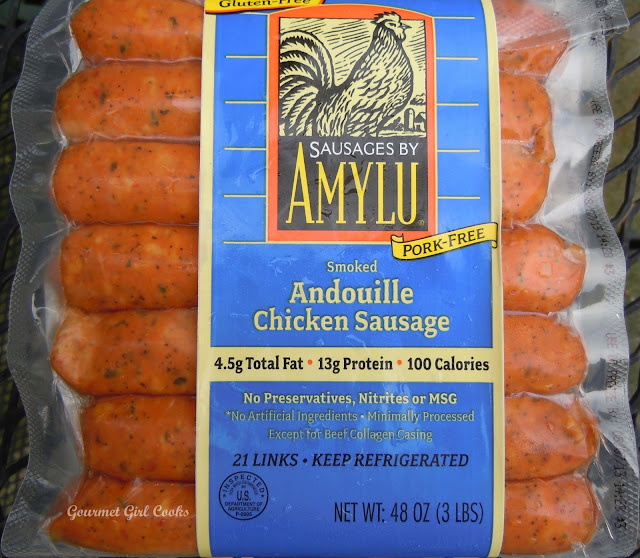 GG. my mouth watered looking at this colorful meal! Thank you for posting the label for the sausages, they seem to be of excellent quality . You are always so helpful. I usually buy those little peppers too. I am always looking for the Kerrygold butter at Costco and can never find it.
A propos FLAVOR extracts, I put the hazelnut drops in my Almond milk with some sweetener and I was in heaven-so good!
I wish you some DRY DAYS! bARBARA.

Hi Barbara! Thank you. I know there will be those that ask me what kind they were, so I just preempt and make it easier to show everyone. They were good because they were not overly hot and the contrast of the sweet peppers balanced it nicely. This is the first week I've seen Kerrygold at our Costco since March. I asked them before why they don't carry it all the time and they told me it was a "seasonal item"??? LOL So, I guess this is the season! Hahaha! It comes in a pretty gold box with 3 bricks inside. I paid $6.79 for 3 bricks which is a good price. Their wild sockeye salmon was $10.99/lb and beautiful, too. I buy their 1-lb container of fresh organic baby spinach every week -- I love it and use the entire container in my spinach-feta pie. I was sad to finish the last piece for lunch Friday! Hope you have a nice Sunday -- and it is looking like rain again here today so we are going to try and get out quickly and get our walk done this morning. :-)