I decided that tonight would be a Sunday Night Spaghetti Dinner night.  I made a big fresh salad to go with the meal.  My youngest son came to have dinner with us, and since both he and hubby are not wheat free, I made them a separate pot of regular organic whole wheat pasta to put their sauce on. Interestingly enough, my son said he wanted to have "my pasta" which was simply yellow summer squash that I cut with my julienne vegetable peeler. Since I had already made the regular pasta for them both, and I wasn't sure he would like it since he is pretty picky...I served his bowl with half regular pasta on one side and half squash pasta on the other and topped both with the exact same sauce.  Guess what???  He actually preferred MY pasta!!!  He ate and enjoyed both of them, but said he actually preferred my yellow squash pasta best. That speaks volumes to me...when he literally had both of them side by side in the same bowl...covered with the exact same sauce...and he actually PREFERRED the squash pasta over the wheat pasta!!!  The sauce I made was super simple.  I sliced 3 small organic zucchini and sauteed them in olive oil and when they were almost tender, I added in a container of sliced fresh mushrooms and cooked them until they were tender.  I removed and transferred them to a bowl while I cooked the chicken for the sauce.  I diced a couple of large boneless chicken breasts and used the same pot to saute them in a little olive oil. When the chicken was cooked (it only took about 5 minutes), I dumped a jar of Rao's Arrabiata sauce over it and added the cooked zucchini and mushrooms back to the pot and simmered it uncovered for about 20 minutes or so. While the sauce was simmering, I made my squash pasta and then sauteed it in a skillet with a bit of olive oil for about 2 minutes or so.  I served it in bowls topped with shredded Parmigiano Reggiano along with a fresh salad. As I stepped outside to snap a few pictures, the sky opened up and it began raining.  Fortunately our umbrella on the patio table was up or I might have had soup instead of pasta!  Check out my pictures below.  Enjoy! 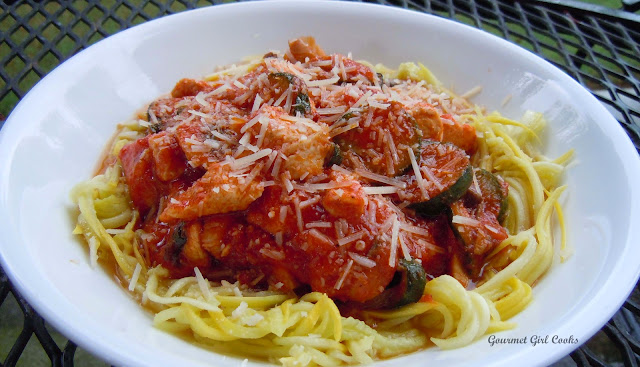 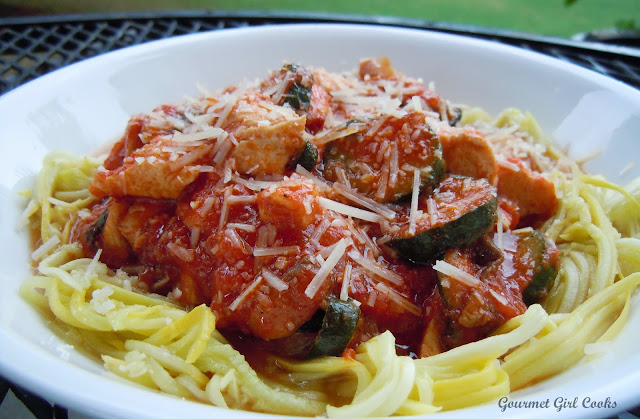 Well, I think pasta is the item that I miss the most. However, I don't miss it much at all anymore since I've been using zucchini and yellow summer squash for pasta. I really love it that way and even my hubby likes it. We prefer it over spaghetti squash for pasta (although we like that with butter for a "regular" veggie.) I run the zuke & yellow squash through my mouli and it makes a shorter pasta, kind of like mini penne ... but that's OK, we like it that way.

The trouble is that just prior to going wheat-free I ordered 12 boxes of Jovial organic einkorn spaghetti from a local health food store ... no refunds on special orders. :-( As you no doubt are aware, einkorn is the ancient, original "real" wheat ... non-genetically manipulated like the hugely toxic modern "franken-wheat" is. In the WB books Dr. D. seems to indicate that einkorn is relatively "benign," however, he still doesn't recommend it. I'd really like to use my spaghetti up, perhaps make it once a month, with the idea of not getting any more of it ... but I'm still mulling that one over.

Hi CyberSis! It would be interesting to see if it causes the reaction (re-introduction to wheat) that so many people talk about when they get accidentally "wheated". You might want to make sure it is on a weekend or time when if it gives you any kind of GI reaction that you are able to ride it out for the day or so some say. Funny you said that because shortly before I went wheat/grain free I had ordered lots of Jovial brown rice pasta! LOL It is still in my pantry -- and it wasn't cheap either! Let me know what, if any, reaction you get if you try it. Oh...so far, the jury is still out with the liquid Lo Han -- had it in a little yogurt to try last night -- it's not winning me over yet...but I will try it again...the powdered version comes this week! :-)

Never tried making squash pasta, must see if I have the right tool to make it.

Hi Sami -- it is easy to make (just need to watch your fingers since they are a little slippery). I use a julienne peeler to make mine -- some people use a larger spiral cutter, too. I really like it and it cooks in about 2 minutes when lightly sauteed in a non-stick skillet in a bit of olive oil. :-)

As I was going through the WB book again last night looking for einkorn references, I saw that Dr. D. had done an “experiment” on himself (Pg. 26-27.) He says he is very wheat sensitive, but when he ate 4 oz. of einkorn bread the only reaction was a blood sugar rise from 84 to 110, as you’d expect after eating any carbohydrate. He had *no* other reaction whatsoever!

The next day he tried it with “regular” bread. Blood sugar spiked to 167 and he experienced severe GI and other symptoms for the next 36 hours!

He actually has quite a bit to say in the books about einkorn. It will raise your blood sugar, as any CHO will do, but it doesn’t contain the most destructive of the proteins/toxins that modern “wheat” has. Interesting what he says on Pg. 227 of the WB book about the possibility of reintroducing einkorn and other ancient forms of wheat ... that it might be reasonable for some people. He even calls einkorn “innocent” on the next page, but when someone asks about it on the WB blog, he will say that it’s better just to avoid all wheat, at least for now.

Well, all I’m interested in doing is using up my “stash.” Based on Dr. D’s experiment, I may try it, but I’m going to wait till *after* my next labs. I’m due for them in about a month. :-)

Sorry your Lo Han drops don’t seem to be working out so far. Maybe you’ll be able to figure out a way to salvage them. I hope the powdered variety turns out to be more to your liking ... you’ve got a lot invested in the Lo Han “experiment”!

Hi CyberSis! It sounds like you might be able to use your stash up, then. But I, too, would wait until after you labs -- just in case they aren't what you expect/hope they will be -- you will always wonder whether it was the einkorn that affected it. This way you will have a better picture of what your values are with what you've been doing/eating thus far. Talking about the WB book -- when I was cleaning the house this weekend...I realized that I have misplaced my WB book -- I removed it from the outer jacket cover (as I frequently do when I am reading it so it doesn't get tattered). Anyway...I have the cover but not the book...LOL. I'm sure it will turn up somewhere...but I have no idea where! :-)

I have the same julienne peeler and just love it. Usually use zucchini for fake spaghetti, but now want to try the yellow squash, too!

Hi Luana! It's a great little gadget, isn't it! I love it, too. I always used to use zucchini for my "pasta"...but once I tried yellow squash, I really, really love it -- it doesn't seem to release as much liquid/juice as zucchini does. I hope you enjoy the yellow squash, too, if you decide to give it a try! :-)

Hi everybody, really enjoyed all the comments here. I've never made squash pasta and wondered if you peel it first. I'm axious to give it a try.