This evening we had Greek Style Spinach-Feta Pie for dinner.  It is one of my favorites. It's a delicious combination of flavors and it reminds me of the spanakopita I used to eat, which is traditionally made with phyllo pastry dough.  I actually made the pie last night while hubby was out with friends after work so I could get a head start on tonight's dinner.  My original crust recipe for this pie was a thicker crust that used 3 cups of almond flour...but I realized that I usually make it with my thinner crust version that uses only 2 cups of almond flour...so I decided to post that version of the recipe below, as well as a few pictures.  P.S. -- I'll be having Easy Peanut Butter Cookies for dessert!  Enjoy! 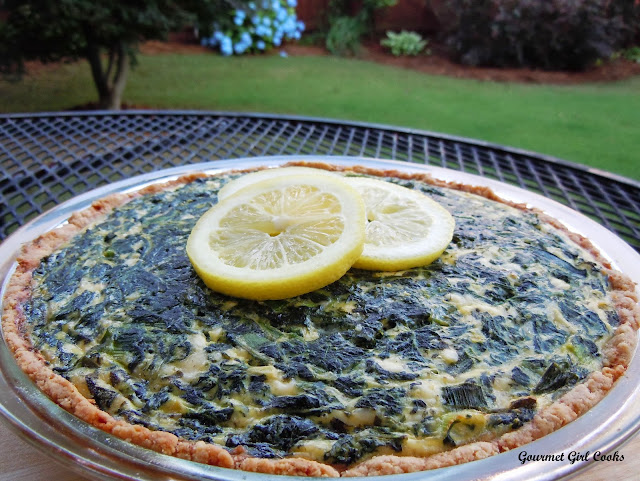 Preheat oven to 325 degrees F.  Place all crust ingredients in a medium bowl.  Cut butter and egg into flour with a pastry cutter until mixture resembles small pebbles and the flour is thoroughly moistened (the same way you prepare a pie crust).  Press crust mixture into pie dish or tart pan (I used a 10" pyrex pie dish).  Bake for approximately 15 minutes or until lightly browned; remove from oven and set aside.

Increase oven temp to 350 degrees F.  In a non-stick skillet, saute onions and garlic in olive oil until translucent; remove and set aside.  In the same skillet, saute spinach, just until wilted.  Drain and press as much liquid out of the spinach as possible (I use a mesh strainer and press it with the back of a large spoon).  Place well drained spinach in a medium bowl; add cooked onions and garlic, feta, dill, lemon zest, pepper, eggs and half-n-half.  Mix until well combined.  Pour mixture into the lightly baked crust and bake at 350 F for 20 minutes; lower oven temp to 325 F (so edge of crust doesn't over brown); bake for an additional 10-15 minutes, or until filling and eggs are set and cooked .  If the center still seems a little jiggly, cook an additional few minutes.

We had this again tonight, too! Yummm! Great minds must think alike. :-) I used the "thin" version of the crust this time ... actually, I "split the difference" and used 2 and 1/2 cups of flour. It was excellent and plenty of dough for the 10" pie dish. (Next time I'll try the 2 cups.)

The crust kind of reminded me of shortbread in a way, and I started imagining almond flour being used for "classic" Scottish shortbread ... nothing but almond flour, unsalted butter, and something for the 10X sugar (confectioners Swerve, perhaps.) I wonder if it would work. Maybe if it was made into smaller, and thinner shortbread "cookies" rather than the more traditional 3/4" thick disks.

Hi CyberSis! Too funny that we both had this tonight! You know...I bet the crust would be good as shortbread using confectioners Swerve! Maybe 1/2" thick would be good -- still a little more substantial than a regular cookie. It would be easy enough to "test" on a small scale, too. I just find this crust so much easier than making regular pie crust...I don't dread making this one! :-)

Hi GG, my husband had to go to the Post office, grocery wise we were in need of nothing, but to my surprise he had dropped by Trader Joe's and bought almond meal and frozen organic spinach. That is so unusual for him, he despises shopping- it only meant that he wanted another Spinach Pie!
And you are right about pie crust-I always dreaded making them. Yours is heaven sent
I did not find time to bake the cookies, thank you for the hint about the hazelnut butter.
Cyber Sis had a great idea with creating shortbread. Adding an egg white might work, is it not like glue holding the dough together?

Hi Barbara! Well, even if your husband doesn't like to shop...at least when he does, he knows what to pick up! I am home for lunch and just enjoyed a piece of the spinach feta pie for my lunch and still have a piece left for tomorrow, too! I had that with a cup of coffee and a peanut butter cookie -- a perfect lunch for me. I would love to find hazelnut butter -- to mix with chocolate and make "Nutella". Have you found any locally? I have mixed chocolate with almond butter before and made "almondella...lol"...but I would like to make it more "authentic" with hazelnut butter, minus all the terrible sugars and add-ins of the commercial product. I hope you have a good afternoon! :-)

No I have not made the hazelnut butter yet, but I have bought the nuts at Tader Joe's, if I only could buy some time!
I make my own peanut butter in the Cuisinart, works like a charm, better than in the fancy blender that I wanted to buy ($759 on sale). After I watched the demo for it, decided against buying it.
A propos *nutella*, the ingredients in Germany are different the last time I was there. Companies that export to USA make products sweeter to please American taste buds. Another good example Is Lindt chocolates, much much sweeter than in Europe. What a shame.

Hi Barbara! I had no idea that the same products like Nutella and chocolates were made sweeter for US customers! No wonder why we have such a problem with health (diabetes, obesity, etc.) in this country. I'm curious to see how the hazelnuts will turn out. Are they roasted or raw? I'm guessing roasted. I will have to look for hazelnuts -- I don't see them as frequently as other nuts like pecans, walnuts, almonds, etc. Take care! :-)

hI AGAIN,
HAZELNUTS ARE HARD TO FIND. They also have become very expensive. Trader Joe's are not roasted. I have to blanch them and then rub them in a kitchen towel to remove the skin.
I found Almond butter at Costco, it is prepared with roasted nuts. The jar is 26 ounces ( 1.5 lbs).
Do you know how to make chocolate syrup or sauce? (sugar free)

I made this over the weekend. It was delicious! It was so easy to make, too. I definitely will make this again and again.

Hi Sandy! So glad you enjoyed it. It truly is one of my favorites -- I make it almost every week so I can enjoy the leftovers for lunch for a few days afterwards! Thank you. :-)

Hi GG, I made the 5 th spinach pie. I wanted to tell everybody that almond MEAL works just beautifully in this case. It saves a lot of money, I pay $3.99 for a lb.at Tr.Joe .Almond flour is double that and it disappears so fast.
I had a lot of uncured, nitrate free bacon, so I used some (cut into little pieces and sautéed) in the spinach quiche and increased the onions (love onions). Well it turned out so delicious, that we all ate more than we should!
Be well, safe and DRY!
Barbara.

Hi Barbara! That is good to know about the meal. I noticed this past weekend that Bob's Red Mill in my grocery store is now $10.99 for a 1-pound bag. I buy Honeyville's blanched in a 5-lb bag for $34.99 which sounds like a lot...until you figure that the same amount of Bob's would cost $55 --YIKES! I have never seen almond meal or flour for $3.99/lb. Is it in a bulk bin or pre-packaged? I bet the addition of bacon and more onions did make it good. Since my hubby is so picky about onions, I don't do that -- but I do love cooked onions. I actually have another pound of fresh baby spinach to use this week -- more than likely there is another spinach-feta pie in our future this week. I don't get tired of it. Thanks for the tip on almond meal -- $3.99 is amazing! :-)

Hi Barbara! If I purchase it from Amazon, I have free 2-day shipping because I am an Amazon Prime subscriber (and no tax either...yet). I order a lot from Amazon, so paying the annual fee is worth it to me (especially during the holidays). Otherwise, if you order it directly from Honeyville, there is a $4.49 shipping for unlimited items. :-)

Hi GG, I must apologize for asking you about the Honeyville almonds. I am embarrassed, could have done the the research myself!
I must say that you are always going out of your way to help out!
Thank you GG. Barbara.

Hi Barbara! I don't mind at all. Since I have done both (ordered directly from them as well as from Amazon)...I already knew the answer and didn't need to look anything up. Thanks for the tip thought about the price per pound at TJ's! P.S.-- you never have to be embarrassed to ask me anything -- I'm happy to help! :-)