This afternoon, we ran a bunch of errands, including our Costco run.  I had hoped they might still have the wild salmon we picked up last weekend...but they didn't have any today.  When we got home, I decided to cook the boneless chicken breasts I had in the fridge.  I poached them and let them cool off and then diced a couple of them and put them in the fridge to chill for a couple of hours so I could put together a quick chicken salad for dinner tonight.  I decided to add some toasted pecans to the chicken salad to add a bit of crunch and flavor. I lightly toasted a big handful of pecans at 325 degrees until they were nice and toasty.  While the pecans were toasting, I made a little dressing for it by mixing some mayonnaise, sour cream, chopped fresh dill, Celtic sea salt and freshly ground black pepper, along with a little bit of fresh lemon zest to give it a bright, fresh flavor. I finely diced 2 stalks of celery and thinly sliced some green onions and then chopped the toasted pecans after they cooled off.  I mixed everything together and served it on a large romaine lettuce leaf so it could be folded over and picked up to use as a wrap to eat the chicken salad.  It was so simple, cool and refreshing. I snapped a few photos for you to see below.  Enjoy! 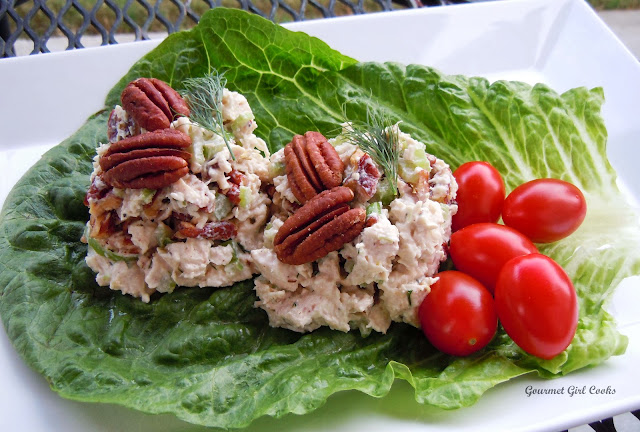 I love the idea of using the lettuce as a wrap for your great-looking chicken salad!

Lovely recipe! What type of mayo do you like to use?

Hi CyberSis! Since I don't use a lot of mayo, I just use the Hellman's Olive Oil Mayo. If I used more mayo than I do, I would probably try and make my own...but for as little as I use it, it would go bad before I could use it all. I mix the mayo with sour cream and then season it -- probably a ratio of 3T mayo to 2T sour cream and then herbs, seasonings (like chipotle powder, etc.). I have even mixed some salsa with sour cream to use as a dressing before! :-)

This looks so delicious, & the way it's prepared this, would make great finger food. Perhaps even with lady fingers in the side.

Thanks so much, Anonymous! :-)

I really like the salsa & sour cream combo, too.

Freshly made mayo without all the additives would be wonderful, and I'm half-way interested in making my own, but so far the thought of raw eggs seems a little creepy. I've read articles galore, both pro and con. I wonder if using Egg Beaters would work. I don't use mayo that much either, so in the meantime, I think I'll pick up a small jar of Hellman's. Thanks for the suggestion.

Hi CyberSis! Basically the 2 things that keep me from making my own mayo are first...I too have issues with raw eggs (organic, cage free or otherwise)...I know there are ways you can pasteurize them yourself (I've read about it)...but for no more mayo than what I use, the fresh home made would go bad before I could use it! So for now, until I find more reason or need...I'll stick with the occasional use of Hellman's Olive Oil mayo. Never thought about trying Egg Beaters...might be worth trying some day with a small batch though! Have a great weekend...I am off to Costco! :-)