There is nothing I like better in the summer than having a bowl of cool, creamy and refreshing potato salad in the fridge to pull out as a quick side dish to accompany grilled meats or even sandwiches.  It just screams summertime to me.  I especially like using red potatoes for potato salad because it eliminates the part I hate most about handling potatoes....PEELING THEM!  Red potato salad not only is easier to make because you don't peel the potatoes, but it is actually prettier because of the beautiful red color the skin adds to your potato salad.  It also gives you a little extra fiber too.

The original recipe I used as a base called for dried dill weed which I have used numerous times over the years in various potato salad recipes.  However, this time I decided to substitute fresh dill instead -- what a difference it made!  It gave the potato salad so much more of a fresh flavor -- fresh dill has so much more of a "clean" flavor than its dried counterpart.  It also called for onion powder, garlic powder and green onions.  Instead, I substituted chopped fresh chives in place of all that which also added a really fresh, mild flavor that I feel really enhanced the flavor of this potato salad.  It also called for hard boiled eggs which I do not care for in my potato salad, so I omitted them as well.

Below I've included the recipe for the Red Potato Salad w/ Fresh Dill that I made for our cookout on Memorial Day weekend.  I found the basic recipe on Allrecipes and then made numerous modifications to suit my taste.  It turned out delicious, cool and refreshing.  I really love the "fresh" modifications.  Below is a picture as well as the recipe that I re-made. 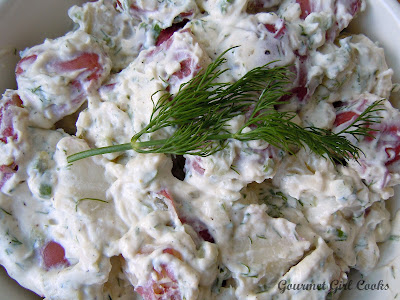 Place potatoes in a pot of water (enough water to cover).  Bring to a boil and cook 10-12 minutes or until just done when pierced with a fork or knife (do not overcook or they will fall apart when you toss with the dressing).  Drain and spread out in a single layer on a cookie sheet to cool.  Mix remaining ingredients in a medium bowl until thoroughly combined.  Taste dressing mixture to adjust seasoning.  Place cooled potatoes in a large bowl and pour the dressing over the potatoes and toss gently to thoroughly coat.  Chill at least 4 hours in the refrigerator before serving.
Posted by Gourmet Girl Cooks at 7:00 PM